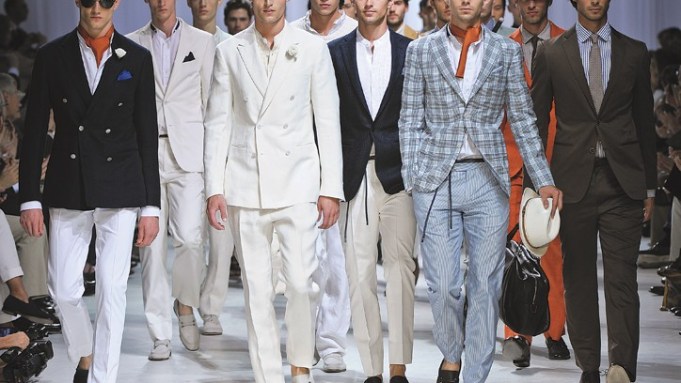 On Dec. 9, the men’s wear brand will launch an online store operated by Yoox that will offer both the firm’s signature line and Zegna Sport collections, targeted to a younger customer. The Z Zegna line is already available at Thecorner.com, a virtual mall also operated by Yoox.

The new online shop “represents a natural evolution of the brand, in addition to being the very first step in our second century of history,” chief executive officer Ermenegildo Zegna told WWD. Zegna is marking its centenary this year.

The opening of e-commerce is part of the company’s “new digital strategy, with the purpose to increasingly connect with customers through Web marketing, interactive technology and social media,” said Zegna. The executive noted the company will thus “be able to open up to a new kind of customer, conquering another market segment, in addition to providing an additional service to our existing customers. I believe digital marketing is a substantial pillar of our brand strategy, one we cannot disregard.”

Zegna said the online store is in response to requests from customers and that he expects it “to generate results in line with one of our top-performing boutiques in the world.”

The aim, he said, is for the online store to have the same sophistication as one of the brand’s brick-and-mortar stores, and it will carry the same range of products. A private view of the online store, reserved for those who register on zegna.com, is scheduled for a few days before the official unveiling. In addition, to mark the company’s century in business, the first 100 online customers will be given the book “Ermenegildo Zegna: An Enduring Passion for Fabrics, Innovation, Quality and Style.” The company has also developed a calf iPad case detailed with Zegna’s selvage centenary fabric. “I don’t think it is important to offer exclusive products per se, but rather listen and respond to the needs of our customers,” said Zegna.

In 2007, Zegna tested an online boutique in the U.S. only, but developed it in-house. Now the brand’s online store will be operated by Yoox, which, the ceo said, shares common values in terms of quality, innovation and “the Italian character.”

Yoox, which is listed on the Milan Stock Exchange, manages 23 e-commerce sites for designer brands such as Marni, Emporio Armani, Roberto Cavalli, Valentino, Alberta Ferretti and Pucci. Federico Marchetti, the site’s founder, underscored the technological package his company provides, from logistics, call center and customer care to fiscal representatives. “In Europe alone, there are 27, one for each country,” he said. “We have 10 years of know-how and local infrastructures, and constant innovation in technology, which is costly.”

In the first half alone, Yoox invested 4 million euros, or $5.3 million at average exchange, in technology. “I like to say that if Yoox were a car, it would be a Ferrari. We would be providing the bodywork, the engine and mechanics, but the brand would always be the driver,” said Marchetti.

While Yoox operates the back end, the brands control all communication strategies, creativity, product, pricing, marketing, events and special content, and maintain a direct dialogue with customers, he added. “They do what they do best, and Yoox is the link,” said Marchetti. “Those fashion brands who push the accelerator are those that want their store to become their biggest in the world, those who understand that it’s a channel where posting a photo is not enough, and investments must be made.”

Marchetti said the goal for Yoox isn’t simply to add more brands. “We want to maintain quality and so we discipline ourselves to open six or seven stores per year, but we have a waiting list of 25 to 30 brands,” he said. “Over the past two years, e-tailing has become more strategic, and all brands are pushing. An online store with us is not outsourcing and not a franchisee. It’s a partnership.

“I may be partial, but those that want to launch their own in-house e-commerce platforms have to buy their customer care, their logistics; they must have four or five legal studios, they spend a lot of money and it takes them about six months to launch their site in one single market,” he added.

Marchetti is currently focused on opening in China. “We want to be the first to open there. No fashion brand has an official online store in China yet,” he said.

China is also a market where Zegna is seeing impressive growth. The region represents nearly 25 percent of sales and, within 15 years, that figure may jump to 50 percent. From 2005 to 2009, sales in China rose 33 percent, and the brand now operates 62 stores there. Zegna plans to create a special watch and apparel collection in China next year to celebrate the brand’s 20th anniversary in the country.

The expansion in China is one plank in the brand’s goal of reaching 1 billion euros, or $1.4 billion, in sales in 2011, Zegna told the WWD CEO Summit last week. Last year, the company reported revenues of 797 million euros, or $1.11 billion. The company expects to post a 15 percent gain for 2010.

The executive, whose grandfather founded the business as a textile mill in Trivero, Italy, believes the company’s heritage and family remain vital, especially as the business enters new markets. In September, Zegna signed with India’s Reliance Brands Ltd. to grow the label in the region, and there are expected to be 10 stores operating in India by 2013. India is forecast to be the brand’s largest market in Southeast Asia by mid-decade. Brazil will have 12 stores by 2013, and the company hopes to enter Vietnam and South Africa as well.

The brand has no plans to expand beyond its men’s wear offerings, which range from sartorial suits to luxury sportswear, and the executive said the firm’s made-to-measure items are also a growth vehicle in emerging markets.

To celebrate its 100th anniversary, the company partnered with the Sowind Group, which owns the Girard-Perregaux and JeanRichard brands, for a limited edition Centennial watch. That led to the signing of a long-term partnership between the companies for a collection of signature watches that will launch next year. Zegna said those watches will be sold in Ermenegildo Zegna stores only.