The Ermenegildo Zegna Group chief executive was in Miami to launch an Agnona women’s wear pop-up shop in the Design District. 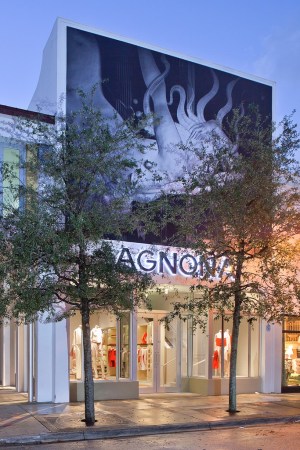 MIAMI – Gildo Zegna has a mad crush on Miami. The Ermenegildo Zegna Group chief executive was in town to launch an Agnona women’s wear pop-up shop in the Miami Design District (MDD) at 150 NE 40th Street, a teaser for the brand’s first U.S. store that opens nearby in the spring. As Champagne flowed for Art Basel parties and openings throughout the neighborhood on Thursday, he gushed about the city’s good attributes, from art to climate.

“Miami’s moving. Everywhere you go in the world, people are talking about it,” said Zegna, who plans to open a second Ermenegildo Zegna store in the Miami Design District in addition to Bal Harbour. “Its ideal location at the crossroads for North and South America and Europe could surpass Los Angeles, which is too far.”

Zegna Couture and Agnona creative director Stefano Pilati is also a fan. Zegna said Pilati didn’t come for Basel since his official debut should coincide with his first collection. In the meantime, the pop-up carries the prior designer’s cruise 2013 collection with pieces such as a color-blocked double cashmere cream and taupe leather coat, seersucker shorts and a coral shift dress with mandarin collar. It’s the first time Florida shoppers have a local point of sale, even through wholesale.

“We’ve been concentrating on growing our Asian market, where most of our dozen Agnona stores are located, so we’re just getting to the U.S.,” said Zegna, who’s scouting a New York address but won’t budge on specifics. “Europe is flat, and Asia has slowed down. I feel more positive about America.”

Since Pilati also will be instrumental in the development of a new decor prototype, the 1,500-square-foot Miami shop reads as clean as the clothing. The only bit of whimsy is a large-scale photograph depicting a crystal mermaid and fish fountain at Villa Zegna in Italy. The new store design will be used in London, which opens in 2014, and when China retail expands. Zegna said the Miami Design District’s “brilliant” transformation pushed him to test an American rollout with Florida.

“I don’t think Miamians drive sales so much as international tourists, like Basel’s crowd that doesn’t just come once a year,” he said.

To fully tap into this luxury pool, Zegna reports Agnona must expand with leather accessories and shoes beyond its textile items like scarves and hats. Pilati will spearhead these categories, as well as revamp its heritage ready to wear and outerwear for a high fashion customer.

“We couldn’t have asked for a better designer to lead us in this new direction. He’s a trusted name,” said Zegna.