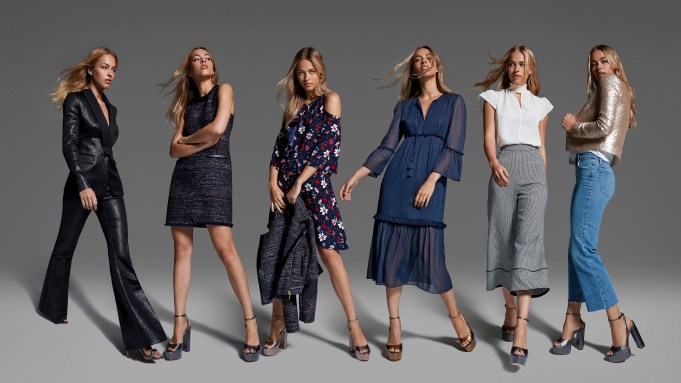 Macy’s, in another installment of its guest designer series, will present the Zoe by Rachel Zoe collection, starting online today and in 152 Macy’s stores beginning Aug. 15.

“This is a limited-edition capsule collection,” Zoe told WWD. “I’m incredibly excited to be able to reach more customers. It’s the first time I am doing a collaboration like this with Macy’s.”

Her more expensive Rachel Zoe collection also is sold at Macy’s. Zoe by Rachel Zoe has been designed to reach a broader audience and is the latest in an ongoing series of designer capsule collections for Macy’s. Past collaborations have included Karl Lagerfeld, Kinder Aggugini, Matthew Williamson, Yigal Azrouël and Giambattista Valli. It’s a strategy that Macy’s chairman and chief executive officer Jeff Gennette considers a “third bucket” in the pursuit of exclusive merchandise. Macy’s also has a well-developed stable of private brands such as INC, Hotel and Alfani, and sells exclusively brands such as Tommy Hilfiger sportswear and DKNY.

“One of the best things about Macy’s is that it specializes in affordable luxury and has a really good perspective on accessible fashion at more affordable prices,” Zoe said. “This is a very logical collaboration,” she added, and for a limited-edition, “It’s a good size collection with suitings, dresses, work looks and day-to-night looks. It’s very diverse with something for everyone. Personally, I love the metallic suiting. It’s something I live in and have become known for. I also love the really crisp shirts and I am excited about the printed pieces and maxidresses. There’s also a lot of footwear….It’s polished but feminine.”

The designer said that while Zoe by Rachel Zoe is a one-off, if the response to it is strong enough, it might stay alive at Macy’s for longer than one season. “That would make me so happy,” Zoe said.

Macy’s officials described the collection as offering “chic and glamorous looks for every occasion.” The collection is priced from $89 to $169 and “has everything the busy woman needs to transition her look from a day at the office to a night out on the town,” Macy’s said. “A staple of the Zoe by Rachel Zoe collection is the juxtaposition of feminine pieces with structured designs that offer women the freedom to mix up their everyday look.”