Sure, aspiring to be an astronaut is an oft-cited dream for children universally, but for engineers and even intimates companies, outfitting astronauts is all the more exciting.

Well before Apollo 11 astronauts Neil Armstrong and Buzz Aldrin stepped foot on the moon, they donned the space suit. Here, WWD looks at some of the unsung heroes — the textile innovations and innovators — involved in the creation of the space suit design, as well as how the technology later impacted businesses and consumers.

1. There would be no space suits without textile innovation.

Since the Apollo mission, NASA’s space suits have been designed and produced by what is now known as ILC Dover. Spearheading the initial space suit design, ILC called on the enlistment of several textile firms and innovators – as well as some former employees of Playtex – from which layers of textiles such as non-woven Dacron, nylon tricot and more were sewn by hand to make the space suit.

Cathleen Lewis, a curator in the space history department of the Air & Space Museum, said often people confuse Playtex and International Latex Corp., the metals division of which manufactured display racks for Playtex products. The metals division also made high altitude pressure suit helmets and eventually was awarded the Apollo suit contract as a subcontractor to Hamilton Standard. ILC became the prime Apollo suit contractor in 1965. The seamstresses who used to work for Playtex were brought in because they were experts in combining soft goods like the rubber used with hard goods, such as clasps on girdles and eventually clasps on space suits, the curator said.

As reported in WWD in 1969, the “all-star industry roster” of fabric and fiber companies that enabled the moonwalk is not one small step but many (hundreds of firms participated across industries), and an even greater leap into textile innovations adapted for performance and everyday use cases.

2. The original space suits were all cut-and-sew.

Years later, fabric molding techniques were employed to reduce bulky seams and make the joints of the space suits more flexible for astronauts going on spacewalks, some lasting as long as eight hours, according to NASA. Today, shuttle space suits are made through a combination of sewing and bonding materials.

3. Space suits inspired the collections of some New York designers for Y2K, the new millennium. 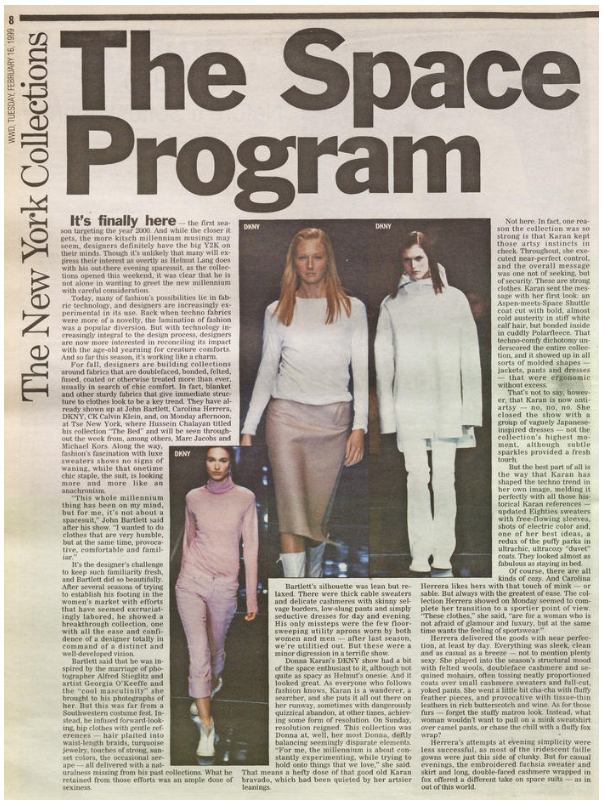 Designers, such as Donna Karan and Helmut Lang, built fall collections inspired by the fabrics in the NASA space suits. This included fabrics that were bonded, double-faced, felted, fused and coated.

4. “Beta Cloth” born out of the Apollo space suit.

To make the nylon space suits more resistant to heat, although not as resistant to abrasive lunar dust, beta fibers covered the outer layer of the space suit. These fireproof silica fiber cloths were made in partnership between Owens-Corning Fiberglass of Toledo, Ohio, and DuPont of Wilmington, Del. DuPont’s more common moniker “Teflon” coated the fabric to make it noncombustible.

5. NASA called for a space suit redesign in the Eighties to expand comfort, flexibility and durability.

The space suit is in its own right a space ship housing a regulatory air supply, with heating and cooling systems in place. In previous iterations, space suits were less flexible and only maintained an internal pressure of about four pounds per square inch, as reported in WWD. NASA activated projects with the Georgia Institute of Technology to experiment with the redesigning of the space suit.

Here, fabric developments were also tested, highlighting DuPont’s Dacron polyester fiber as an ideal choice, as the polyester is heat-set at higher temperatures.

The answer was, indeed, rocket science for Los Angeles-based Speedo USA, which enlisted NASA’s Langley Research Center in Hampton, Va., to help design a swimsuit with Olympic-worthy drag reduction — to the tune of a 24 percent reduction in skin friction drag — as revealed on NASA’s database. The Space Age-inspired swimsuit, the LZR Racer, helped athletes break records and swim ahead of the current pace of innovation, with low-profile seams and zippers crucial to the design.

7. Space suits are white because white reflects heat in space.

As on Earth, so it is in space. White space suits mean astronauts can deflect 275-degree sunlight in space.

8. No difference exists between a male’s or female’s space suit.

Although NASA underwent fire in media reports for failing to properly suit its female astronauts for its first all-female spacewalk, no gendered difference exists in the space suits. The company revealed females usually require a smaller size.

In the late Eighties, athletic footwear made a swift advancement through the adoption of NASA space suit technology and poaching the talents of an aerospace engineer, Al Gross. Gross worked on NASA’s Apollo lunar landing program helping Avia Group — the activewear brand now owned by Sequential Brands Group — design an advanced shoe that would maintain shock absorption and stability over a longer period of wear.