With revenue of $178 billion and a bustling business that accounts for nearly half of every dollar spent in U.S. online retail sales, Amazon’s market value breached the $1 trillion mark mere weeks after consumer electronics giant Apple first broke the milestone.

“Amazon is running on all cylinders right now,” said Cooper Smith, Amazon research director for Gartner L2. “Its e-commerce business is doing over $27 billion in revenue a quarter and is still seeing double-digit growth. Its services, such as FBA, AWS and Subscriptions, are bringing in almost $20 billion a quarter collectively and growing between 35 and 55 percent.” 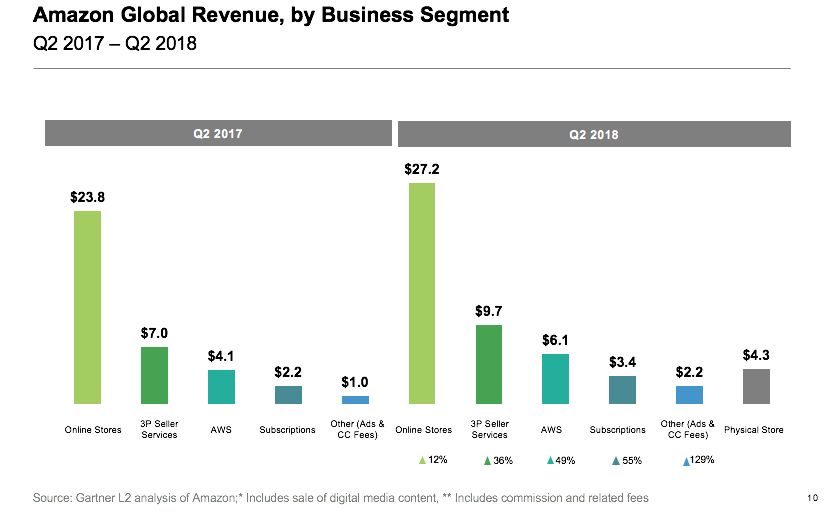 The iPhone-maker and the Alexa purveyor share some similarities, in that they both appeal to mainstream consumers. But their approaches couldn’t be more different. Where Apple moves cautiously into new areas — with a reputation for refining, but not pioneering, new technologies — Amazon races forward to upend various sectors with no apparent fear of failing.

The signposts were there from the start. Founder and chief executive officer Jeff Bezos once considered naming his business Relentless, even buying the domain for Relentless.com. Now, across its 24-year history — 21 of which as a public company — the Seattle-based e-tailer has lived up to that promise.

Take its devices group. Apart from its excellent Kindle e-book reader, the giant cranked out gadgets like the disappointing Fire phone and a range of mediocre tablets. The company bled money for years on tech experiments, practically laughing off gadget failures that would consume other companies. The introduction of TV products followed, then voice speakers, its break-away hit. Throughout it all, the largesse of its e-commerce operation and growing Amazon Web Services cloud business gave the company plenty of runway to try things and keep at them.

Today, Amazon’s retail platform underpins and connects many of those efforts, whether in fashion, groceries, electronics and home-based devices. With a ballooning workforce — at more than a half million employees — and expansions that include new distribution centers and the addition of a new headquarters, the company is racing toward growth. Even in its brick-and-mortar pursuit: Amazon just opened its third Amazon Go location — its largest-ever cashier-less store, at 2,100 square feet — in Seattle on Aug. 28.

What Amazon did for books, it clearly aims to do for groceries, along with health care, voice tech and, notably, apparel, among other things.

Its next frontier? All signs point to ads.

“Advertising is Amazon’s smallest but fastest-growing business at $2-plus billion a quarter and triple-digit year-on-year growth,” Smith added. “There’s still a lot of upside for growth across all these core businesses.”

The ad game for tech companies seems a little more precarious these days. Indeed, on Wednesday, Google, Facebook and Twitter are set to appear before Congress once more to discuss how their platforms will fare with upcoming mid-term elections. For lawmakers, as well as the public, questions remain about how the giants are securing their networks, sniffing out bad actors and fake accounts, handling privacy concerns and vetting advertisers.

In that context, a nonconformist tech juggernaut jumping in and mixing it up could be rather fraught. But one thing seems certain: Amazon will keep at it until it’s up-ended the status quo. And that means Apple may have way less to fear than the likes of Google and Facebook.