LONDON — In a bid to disrupt — and democratize — influencer marketing, and cultivate authenticity in social selling, entrepreneur Aaron Simpson has created Kindred, an app where anyone can buy, sell and donate their profits to charity.

Kindred, which launched this month, works with 2,500 brands across a variety of sectors, ranging from fashion to arts and entertainment, business supplies and services, electronics, food, health and beauty.

Users receive commission on the sales of products and services they’ve recommended to friends, family and members of their community. Many products come with discounts. At least 1 percent of each sale goes to charity. Users can then decide how much of their commission they want to donate to charity.

The app works with 75,000 charities, large and small, via partnerships with Just Giving and Global Giving.

Simpson, a cofounder and the former chief executive officer of Quintessentially Group, the concierge company, said Kindred wants users to “share what they love and make genuine recommendations to their friends, family and followers on their social channels.” 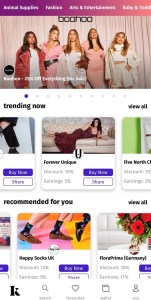 He said consumers, who have become more sophisticated about how they spend their money, can buy an item — often at a discount — using Kindred while raising funds for causes that are close to them.

Kindred took six months to develop and raised 2 million pounds in investment with a 35 million pound valuation before it began earning money. The London-based start-up said it has more than 50 people employed globally, and makes its money from the brands, which hand Kindred a 5 percent commission on the net sale value of an item or service.

Chief operating officer Mike Gadd said the app wants to tap into concerns about “how we consume as a society, and a growing skepticism around paid-to-post influencer marketing.”

Kindred is part of a growing trend for apps that are looking to disrupt the traditional influencer model. Brands have become increasingly frustrated with certain influencers on whom they’ve lavished money, merchandise and brand experiences, often with no clue of the return on investment.

Consumers, too, have become cynical about some influencers who they know are paid to push product.

Earlier this year, the app LetsBab launched as a marketplace for brands to allow shoppers — regardless of their online popularity or influence — to make instant cash by recommending fashion, beauty and lifestyle products. Users can also choose how much of their commission they want to donate to charity.

In an interview at Kindred’s offices here near Oxford Circus, Simpson said he was inspired partly by Quintessentially, which he founded in 2000 along with Ben Elliot and Paul Drummond. Simpson currently serves as that company’s executive chairman.

“Ultimately, Quintessentially was built on word of mouth. We hadn’t spent huge sums of money promoting it and that worked because if you get word of mouth or peer-to-peer marketing then you can cover your segment quite quickly,” he said of the business, which is now a full luxury lifestyle group offering services to members such as real estate, wedding planning, travel and fine art.

In the next months the Kindred team is looking to get some major beauty brands and multibrand fashion retailers on board in addition to bars, restaurants and clubs. Kindred is also talking to the big media groups. TI Media, owner of magazines including Wallpaper, Country Life and Decanter, already sells subscriptions via the app.

There is an ethical and sustainable division to come, and in a bid to promote the charity element of the business, Kindred said it plans to donate 100 percent of the fees it makes to charity on Giving Tuesday, the day after Cyber Monday.