An Apple Event for These Pandemic Times

Over the past year, technology has moved to the center of modern life in a way that few could have anticipated, becoming home office assistant, primary source of comfort and essential lifeline to the outside world. And as health restrictions ease, some of these established behaviors likely won’t go away.

Apple is ready to lean into the momentum with its latest updates, unveiled Tuesday, that look born and bred for these times — including new devices, services and a new spring-bound color for the iPhone 12 and 12 mini, which will be available soon in purple.

But it was the tech giant’s push to remake its devices with its own silicon that was the star of the show, as it promised faster performance in its desktops and tablets and credited its processor chips for the boost. That matters, particularly for the creator world, which reached peak hype as a locked-down public tethered themselves to their screens.

There’s plenty for content creators to look forward to now, with a more powerful iMac computer and iPad Pros coming to market.

The new rainbow of candy-colored iMacs may look like child’s play, but according to John Ternus, senior vice president of hardware engineering, the 24-inch desktop is a serious piece of kit. Ternus called it a “huge step forward in the transition to Apple silicon,” as it boasts the company’s M1 processor. 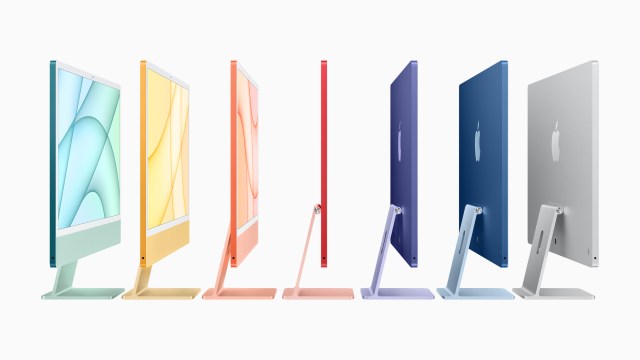 The chip’s tiny footprint works with smaller heat management components, allowing the iMac’s thickness to shrink to barely there proportions. But it’s enough to house a 4.5K Retina display, with 11.3 million pixels, a 1080p FaceTime HD camera, studio-quality mics and a six-speaker sound system that pledges to make Zoom calls sing. The company promised that it wakes almost instantly and delivers speedy performance, along with other updates that gamers, animators, video professionals, designers and other graphic artists will appreciate, like faster graphics and rendering.

Touch ID is also coming to iMac for the first time with a dedicated button with fingerprint sensor, so users can lock down their computer or authenticate payments for services, subscriptions and shopping.

Pre-orders open on April 30 with delivery in May, and the seven-core computer starts at $1,299 in four colors, and $1,499 for the eight-core iMac, with a choice of seven colors

As for the actual iPad, the Pro version will also hit the market with the M1 chip, eight-core processor, 16-core neural engine and graphics performance that’s 1,500 times faster than the original iPad, Apple said.

The screens deliver nearly 4 million pixels on 11-inch iPad Pro and 5.6 million pixels on the 12.9-inch version, which will come with a Liquid Retina XDR display. Other enhancements include 5G support, improved microphones and a 12 megapixel ultra-wide front camera with Center Stage, a new feature that keeps users in the center when they move or zooms out when other people come into the frame.

Smart HDR 3 is also coming to the iPad Pro, and along with LiDAR — a measuring or tracking technology that uses lasers for higher accuracy — the device should be able to handle shooting in even more low-light conditions. Apple positions the upgrades as a boon to video calls, but social influencers and other creators will find them handy for recording at night, among other things. 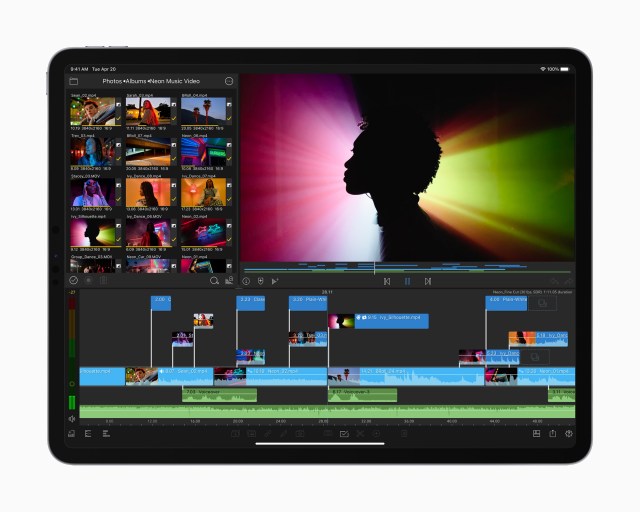 “Customers love taking stunning photos and videos on their iPad, and with powerful apps, these advanced cameras enable so much more, like video capture for mobile journalists and content creators, especially with the built-in studio quality mics on iPad Pro,” said Fiona O’Leary, a designer in Apple’s imaging and lensing technology team.

“And with the LiDAR scanner, they pave the way to completely new workflows, like motion tracking with [mobile app] CamTrackAR, super-accurate depth data makes going from green screen to pre-visualization on location easier than ever,” she continued, “and you can build that final render with greater confidence.”

The tablet was also upgraded with a Thunderbolt port, for super-fast connections to large storage devices and other accessories.

In addition, the company introduced a new family sharing option for Apple Cards, the next-generation Apple TV 4K with a redesigned Siri remote and a brand new device called the Air Tag, a $29 Tile-like finder of lost car keys, bags and the like. 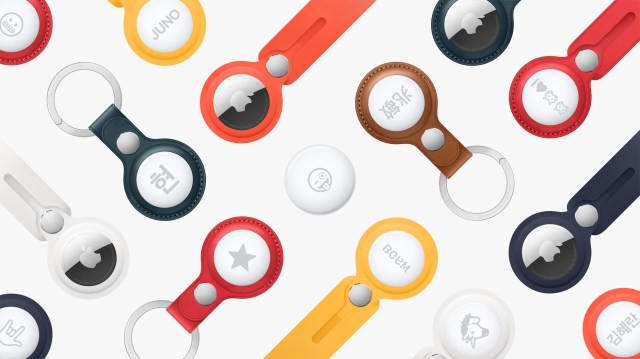 Air Tags can be fit into a range of optional accessories.  Courtesy image

The device — which can be personalized with free engraving, including text and one of 31 emojis — ties into Apple’s Find My system for what engineering program manager Carolyn Wolfman-Estrada called “precision finding.” IPhone 11 and iPhone 12 owners will not only be able to track their possessions to a house, but its actual location inside that house. Apple’s U1 chip enables the ultra-wideband technology used for the precision finding.

There’s something inherently optimistic about the little round devices, in that people will soon have greater need to locate their car keys or luggage in a post-lockdown world. They’ll be able to look stylish while doing it, too, as Hermés, a key Apple fashion partner, designed a handcrafted leather collection, bag charm luggage tag and key ring for the Air Tag. 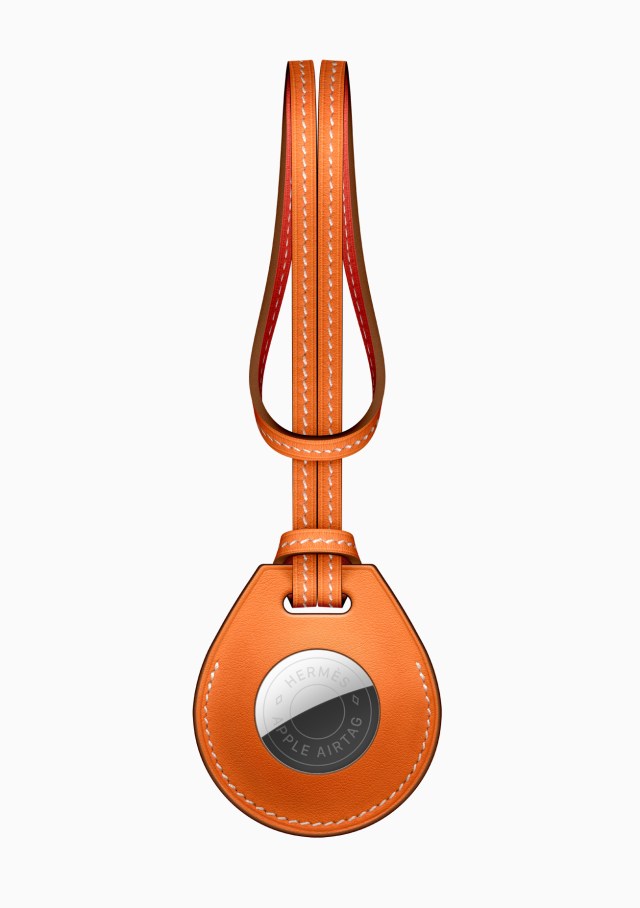 Elsewhere in the Cupertino, Calif., campus, decision-makers decided to get in on the pandemic-era audio frenzy ignited by Clubhouse — but in their own Apple-esque way. The company doesn’t really deal in the social media space, so it’s instead focusing on its already massive podcast platform and adding support for subscriptions.

It’s too early to say whether audio platforms will remain popular once lockdowns lift more broadly, but for now the Clubhouse phenomenon has already inspired numerous tech companies. The latest is Facebook, which is playing more directly in social audio.

This week, the social giant revealed that it’s not only supporting podcasts, but it also developed audio creation tools, a sound library and Soundbites, a new platform for short-form audio clips that’s in testing. It’s also planning to roll out a more Clubhouse-like environment called Live Audio Rooms, so Facebook Group users and public figures can talk it up and address listeners in Facebook and Messenger. The rooms are slated to roll out by the summer.

Although Clubhouse remains free for the moment, it’s clear that Apple and Facebook want to go a step further by monetizing their features. The latter will allow people to charge for Live Audio Room access as one-off fees or subscriptions.

As for Apple, at least some of its latest updates were likely in development before the coronavirus took hold. But its announcements look particularly suited for the times now and may age rather well, even after the pandemic.