Apple's new LiDAR tech in its latest iPad Pro is all about the camera — and augmented reality.

Apple ratcheted up its AR push with a new iPad Pro that uses laser technology, the company said Wednesday.

The tablet, an update to its two-year-old iPad Pro, features a three-camera array, similar to the iPhone 11 Pro. The 12 megapixel camera shoots in wide angle and another 10 megapixel camera offers ultra-wide angle. The last uses a LiDAR laser scanner — short for Light Detection and Range — that amplifies the device’s depth sensing powers.

According to Apple, the tech boosts better augmented reality on the tablet by quite a lot. The laser works indoors and outside, and can measure distances up to 5 meters away. The A12Z Bionic chip also brings more processing power, so calculations can happen rather quickly.

Apple explained the tech a bit more on its web site: “The custom-designed LiDAR Scanner uses direct time of flight to measure reflected light from up to 5 meters away, both indoors and out,” the company wrote. “It works at the photon level, operates at nanosecond speeds, and opens up tremendous possibilities for augmented reality and beyond.”

LiDAR figures out distance by tracking how long it takes for light to reach an object and reflect back, Apple said, adding that the Space-Age sounding tech is so advanced, NASA is using it for the next Mars mission. 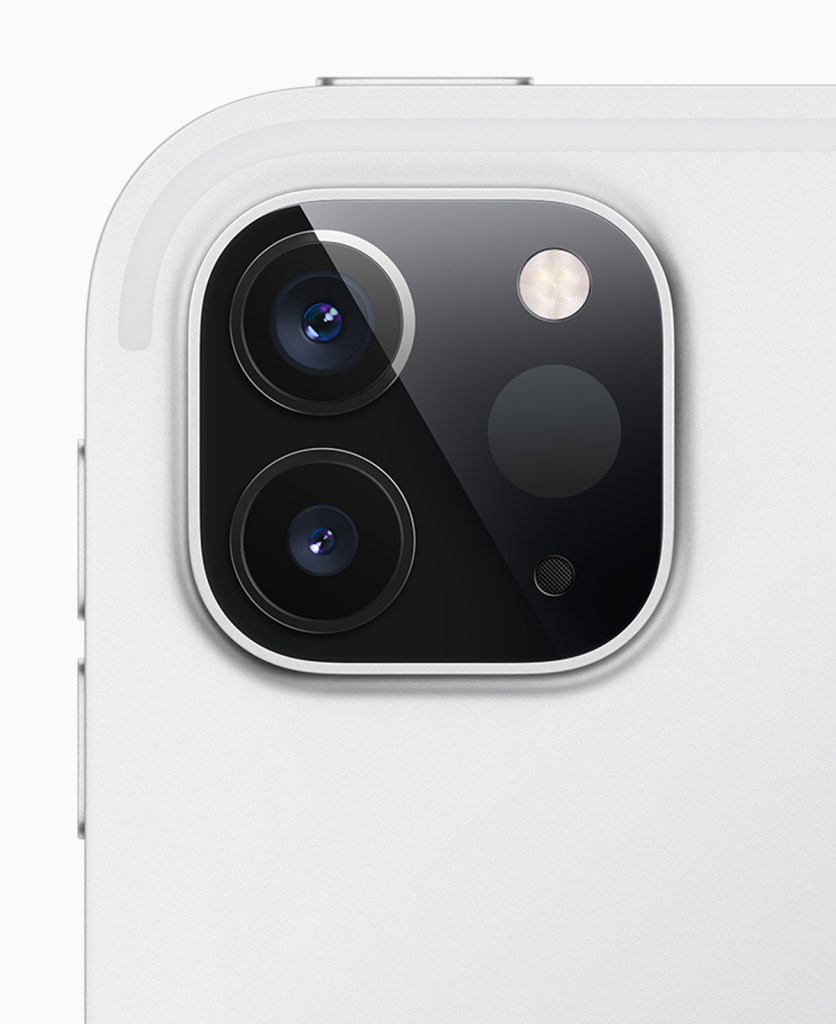 Here, app makers have been working to come up with new ways to use the cameras. Shapr3D, for instance, lets people map their living rooms by holding their iPad Pros up in the air. LiDAR scans the environment, while Apple’s neural engine distinguishes between walls versus furniture. The software then outputs a map, first in 2-D and then in 3-D.

Apple’s Measure app offers more robust measuring capabilities on the iPad Pro, compared to other devices. The software not only identifies and measures details, like the edge of a table, but it will even measure people, the company said, such as their height.

The device offers twice the storage of the previous models, starting at 128 gigabytes of space, and will come in two sizes, 11-inch and 12.9-inch versions priced at $799 and $999, respectively.

The company is positioning the iPad Pro more as replacements for laptops, having created a “magic keyboard” that folds out to include a stand and features a trackpad and USB-C port for pass-through charging.

But the tablet may shine more as a capture tool and scanner, and users for LiDAR will probably expand, as more developers get their hands on it.

The furniture business has already made great use of AR to allow people to see what a couch, coffee table or home textile might look like in their real homes. Others use smartphone cameras to do everything from measure feet for customized shoes or insoles to measure faces for eyeglasses.

Other uses of augmented reality in makeup, hair color or eyeglass try-on tend to hinge on the front-facing cameras, though. But like with most camera innovation, it usually arrives on the rear camera before heading to the selfie camera. That suggests it’s only a matter of time. Until then, retail apps and web sites using tools like Shopify’s new AR-friendly features should make good use of this mobile camera tech.

Although Apple usually holds a spring press event, the company made this and other product unveilings via press release. Tech companies and other organizations have been holding off on large in-person events due to the coronavirus pandemic. The fact that the tech giant went ahead with this announcement suggests that it’s making headway on production disruptions in its Chinese manufacturing pipeline.

Apple also introduced a new MacBook Air and new iPhone 11 and iPhone 11 Pro silicon cases and leather folios, as well as new Apple Watch straps. Notables among the latest sport bands and sport loops — which are available in new, spring colors — are new models from Nike and Hermès.