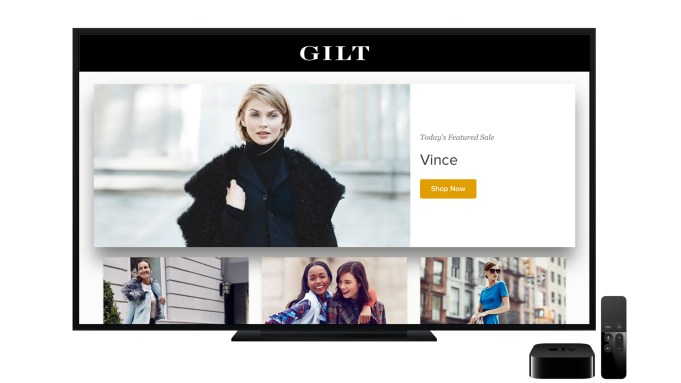 When Tim Cook introduced the new version of Apple TV in September, he emphasized the importance of TV in our lives, calling it “the golden age of TV.”

Yet, he said, “as important as TV is, the television experience itself hasn’t changed that much in decades, while innovation has been thriving in the mobile space.”

Cook, speaking from a stage built in San Francisco’s Civic Center, said Apple’s vision for the future of television through applications was simple and provocative, and he introduced a new operating system, tvOS, based off of iOS, making it relatively easy for developers to kick the tires.

The Apple TV is a set-top box — like the Roku or Amazon Fire TV — that works with a Siri remote and allows users to download apps to watch television shows and movies, listen to music, play games, or do anything, really — as long as there’s an app for it.

Using apps also means that the TV can now become an entirely new retail channel. (While earlier versions of Apple TV hosted content channels, this is the first time there is an App Store for Apple TV.)

At the event, Gilt Groupe chief executive officer Michelle Peluso introduced Gilt’s Apple TV app, designed to build on Gilt’s desktop and mobile experiences but created to take advantage of the larger screen. Gilt shoppers can sync their account, scroll through products horizontally and complete purchases on the TV with one click — Gilt automatically combines shipments.

“Apple’s innovation has always been great for Gilt,” she said, and it has helped make shopping “cooler, faster and more exciting.”

“Having a TV as our palette has been amazing for detail resolution and images and being able to showcase them,” said Gilt’s Steve Jacobs, chief product officer and head of growth marketing. He compares the experience of shopping looking over someone’s shoulder at a computer to sitting together and browsing on the couch. “It’s a different way of shopping with family or friends. It’s the first time that ‘social shopping’ is for real.”

In other words, using an Apple TV to shop has the potential to combine the social shopping aspects of “real life” with the on-demand, on-your-couch efficiency of shopping at all hours in your living room.

Although the functionality is there, it’s still too early to tell if and how consumers will adopt the practice of using a TV app to shop. While having a dedicated shopping app is an interesting experiment, said Creative Strategies principal Ben Bajarin, “I’m not sure they are the real goal of where we are going.”

Instead, he is more excited about the future possibility of using television as a discovery platform that then allows the viewer to immediately purchase — and it would less of a departure from how viewers already experience TV. For example, a viewer watching a morning show with a product placement could immediately click to buy, or a commercial could be paused while the consumer clicks to learn more and purchase through Apple Pay before returning to what they were watching.

“The concept of TV commerce has been around for some time, but there has never been a good manifestation of that,” Bajarin said. “We haven’t had an experience of television shopping other than something like HSN, where you see a number and you call it. The idea that those two things could become integrated is interesting and new, and it has been talked about for some time.”

To that end, both QVC and HSN have introduced apps for Apple TV. Both mimic the experience of watching the channel on broadcast, albeit it’s through an app, doesn’t require a service provider and allows for immediate buying in addition to the ability to view and buy other recent items.

Naturally, channels like QVC have a bit of an upper hand on the television commerce game.

“We’ve been doing shoppable video for a decade,” said QVC senior vice president of digital commerce Alex Miller, “and we’ve had a Web site since 1996. He said that QVC has invested heavily in its IT teams and their technology, so that when a new platform arrives, they are able to move quickly.

After introducing an iPad app in 2010, QVC took advantage of the “second screen” trend last September with an “enhanced second screen experience” that allowed viewers to shop on an iPad while watching QVC on live TV.

With the Apple TV app, said QVC vice president of IT commerce platforms Venkatesh Natarajan, QVC merged the two, and took the second screen experience to life on the primary screen.

The QVC shopper is probably one of the most likely to make a smooth transition to shopping on Apple TV, so it’s natural that they were one of the first retailers to create something for the new channel. Miller said it’s not a demographic play or an overt attempt to change who the customer is — which, in their case, is generally a 35- to 65-year-old female “retail omnivore” who shops for entertainment. (He did acknowledge that they did see a slightly younger, more male demographic in QVC’s mobile platforms.)

QVC’s first iteration for Apple TV was created in about 30 days, so there is a long list of goals for ways to use the platform in the future, Miller said.

Since the operating system has only been available for a couple months, it’s hard to guess what other retailers will create — and how (or if) consumers will respond.

Forrester analyst Sucharita Mulpuru-Kodali thinks that for it to be successful, the experience would have to be significantly different from something like QVC or HSN. “Someone would have to reimagine the experience; it would require someone to be super creative. I think there is something there, but nobody has built it yet.”

Plus, she pointed out, not many people have Apple TVs, so apps might be “completely dead on arrival.”

Although Apple doesn’t share sales information, it said that Apple TV will be available in 100 countries by the end of the year, and it’s sold more than 25 million units of Apple TV.

Mulpuru-Kodali said that the examples of shopping apps, and even future possibilities like shopping from a commercial or TV show, are solutions that try to accommodate the retailer, without providing much value to the customer.

The scenario now possible from apps like Gilt’s — for example, brides shopping for a registry during an engagement party, or family members taking care of holiday shopping after Thanksgiving — sounds enticing, but it’s riding on a lot of “ifs.” Mulpuru-Kodali doubts customers’ willingness to download more apps and retailer’s ability to solve the logistical end of the equation if TV viewers were eventually able to immediately buy something seen on TV. “The app is very frictionful,” she said. “And the issue isn’t in the tech; it’s in the fulfillment.”

To be sure, there are a number of shopping trends that point to potential success. Shoppable video, social shopping and mobile shopping are all buzzwords on the rise.

“The whole e-commerce and digital landscape has completely changed,” Natarajan said. “It’s all very based on speed and convenience.” The mobile infrastructure and underlying data, he said, mean that retailers are now wise to focus more on the experience, rather than the transaction.

The key to wide acceptance and use of television shopping rides on if a major leader in the space, like ABC, was able to integrate the ability to purchase in real time with advertisers, Bajarin said. “We need someone to pave the way. It’s too new to know what adoption will be like, and there is so much infrastructure that has to be associated with this.”

Still, for retailers looking for new channels, experimenting with shoppable TV — whether through Apple TV or another outlet — is worth a try.

“We saw the possibilities, and it was one of the first major channels for us in a while to interact with customers in a different way,” said Jacobs, of Gilt. “It was a no-brainer to pursue it.”