While the larger Emporio Armani brand already boasts touchscreen timepieces, the Exchange had only offered hybrid watches, a category known for combining a few digital features with an analogue design sensibility. Now, the latter’s first crop of wearable devices boasting a capacitive — read: touch-friendly — display arrives under the banner of its Connected collection.

Like the Fossil brand, which just unveiled its fourth-generation smartwatch, and others in the Fossil Group family, A|X Connected offers many features modern smartwatch users expect — including heart-rate tracking, waterproofing up to three atmospheres, GPS and activity tracking, Google Assistant voice command and Near Field Communication for mobile payments.

The devices are sized at 46 mm. and feature 1.19-inch active matrix organic light-emitting diode, or AMOLED, displays; customizable signature dials, and battery life of one to two days. The units, which start at $295, come with linked bands in black, gold, coal or silver.

Armani Exchange also announced that American model, actor and musician Lucky Blue Smith will be the main “ambassador” for its fall 2018-19 watches ad campaign. Smith will be featured alongside Selah Marley, 19-year-old daughter of Lauryn Hill and Rohan Marley, who represents the brand’s apparel. 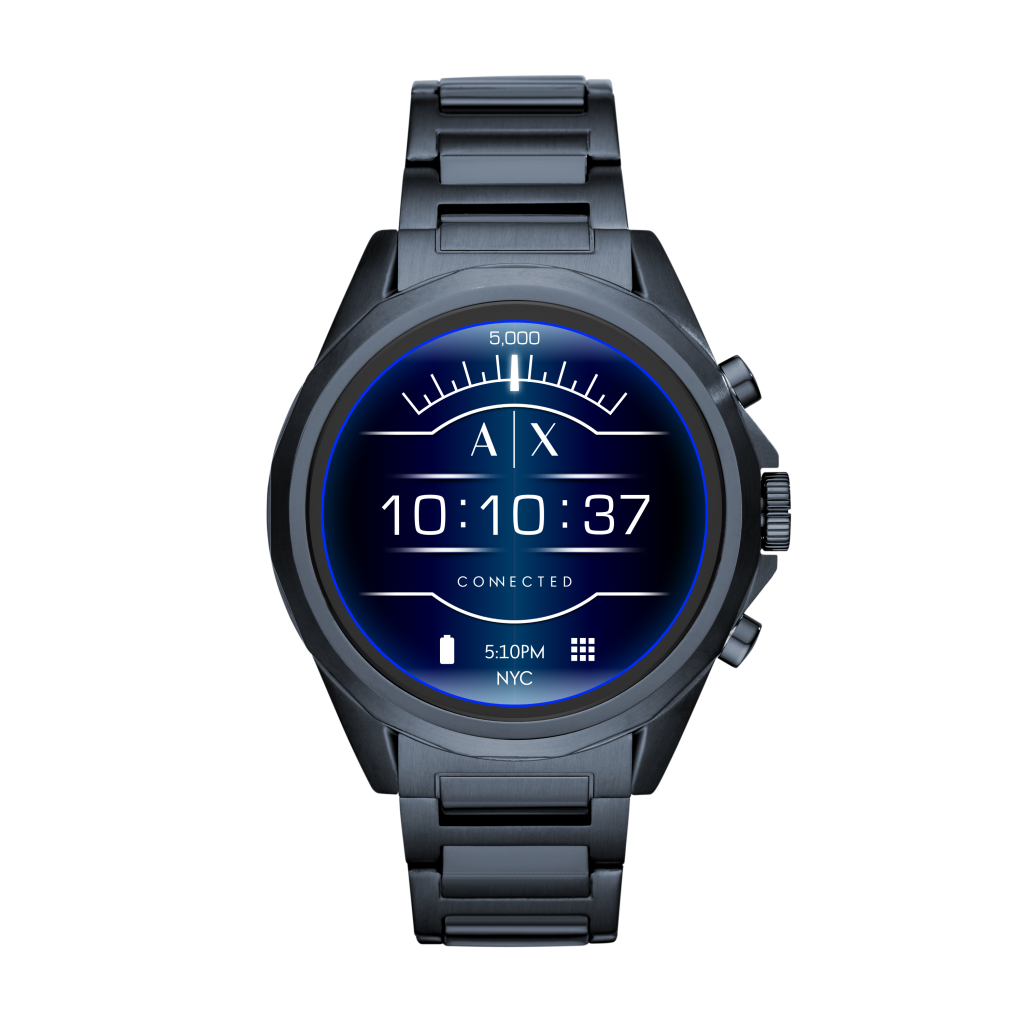 The Connected watches arrive with the 2100 processor from Qualcomm, which introduced its 3100 chip set earlier this month. While Armani Exchange refused to comment on future plans, including whether support for the battery-saving 3100 is in the works, it’s very excited about the current announcement and the broadening of its product line.

“The Qualcomm 2100 chip offers great functionality and value to Armani Exchange customers,” a company spokeswoman told WWD. “Our customers have been anticipating the brand’s first-ever touch-screen smartwatch and are excited the product has arrived in time for the all-important holiday shopping season.

“We’ll keep listening to their desires as we build out future products,” she said.

Clearly timing is everything, with the holiday period looming. And the sub-$300 price point means that shoppers can enjoy a smartwatch now and consider a new release in the future, without feeling stuck with an overly pricy investment. It also means that an even larger swath of voice-friendly, NFC-compatible wrist gizmos are hitting the market, which could drive more tap-to-pay retail scenarios.