Back in Black
Acme Made's fall collection of laptop bags will not look out of place with the season's new blacks, whether the item is a velvet jacket, a bit of lace or a strand of pearls shrouded in net. Made of upholstery... 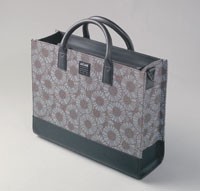 10 Things to Know About Clubhouse

Back in Black
Acme Made’s fall collection of laptop bags will not look out of place with the season’s new blacks, whether the item is a velvet jacket, a bit of lace or a strand of pearls shrouded in net. Made of upholstery fabrics, the padded bags also come in an updated stripe for those who aren’t quite ready to return to the dark side.

Fashion a-go-go
Australian company Fashion DVDs is offering the Paris, Milan and London spring-summer 2005 shows on DVD. The discs are grouped into such categories as daywear, eveningwear, knitwear and leather. They retail for $34.95 each and can be purchased on Amazon.com or at fashiondvd.net.

Open To Interpretation
Parsons student Maria Villamil has created a glove that produces three-dimensional, abstract drawings that reflect a person’s emotional states while dreaming. Sensors in the glove monitor the heart and sweat glands in the hand while a person sleeps. The Dream Recorder includes a nightmare-alert device that detects and interrupts nightmares.

Wireless Style
This Bluetooth headset from Jabra weighs less than an ounce, and its noise-canceling feature makes it easy to hear your cell phone over the roar of traffic or lunchtime chatter. The JX10’s charger lasts for four hours of talk time, and it retails for $179. Jabra also makes a speakerphone for the car that looks like a sleek silver egg and another headset that lets a cell phone pause in playing music when a call comes in. The SP500 speakerphone retails for $99 and the C120 and C220 music headsets start at about $30.