According to Bluecore, the solution effectively takes Google’s weighty cloud muscle and puts an interface on it, so clients don’t have to figure out how to interpret raw data.

“For years, there’s been talk about the convergence of the role of the CMO [chief marketing officer] and the CIO [chief information officer] at retail companies,” said Fayez Mohamood, Bluecore’s chief executive officer and cofounder. The partnership helps CMOs “by making it easy for them to activate personalized experiences…without depending on legacy systems and multiple internal departments.”

The interface allows marketers to drill down into the needs, behaviors and preferences of each segment of their audience. 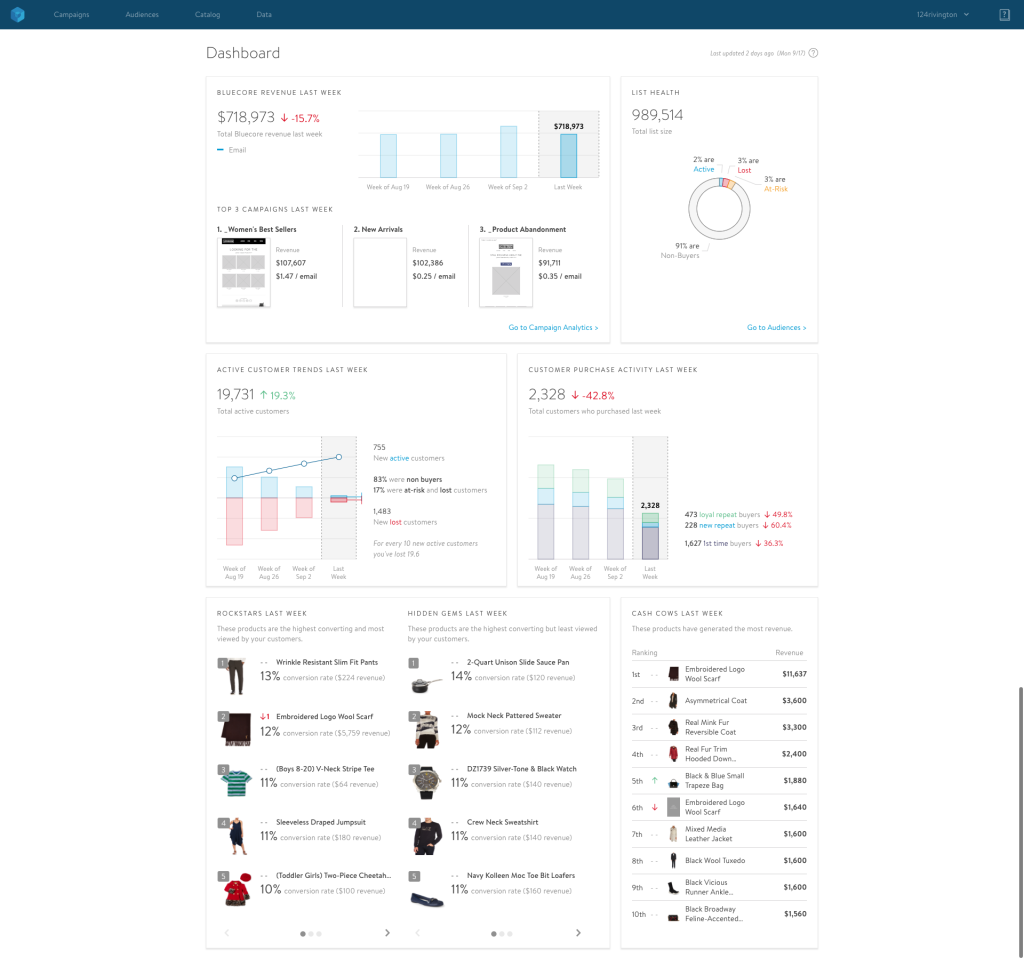 Bluecore, which serves 400 retailers — including Tommy Hilfiger, Perry Ellis, Teleflora, Staples and Best Buy Canada — built its Retail Performance Cloud entirely on Google Cloud. That should be no surprise, considering the search giant’s cloud business has been aggressively courting the retail sector.

Stores and brands look like a golden goose for competitors taking aim at Amazon Web Services’ dominance. While some retailers do plug in with the market leader, others hesitate to add to the e-commerce giant’s bottom line or give it access to their data. Naturally, that opens up a major opportunity for rivals like Microsoft’s Azure and Google Cloud.

According to Gartner, the company holds 3.3 percent of the enterprise cloud market, while Azure claims 13.3 percent. Both are a far cry from AWS’ 51.8 percent.

Google’s cloud business is growing quickly, and it’s pushing to close the gap. Part of that effort is the installment of Thomas Kurian, the Google Cloud division’s new ceo, last November. The department is also racing to add hundreds of salespeople to the team. And this week, the Mountain View, Calif., company holds its Google Cloud Next conference, which is expected to deliver new software introductions and partnerships, such as Bluecore’s announcement, as well as new tools and services.

In essence, that means retailers that use Google Cloud will be able to unite their data more easily and use it in AI-powered customized experiences.

“The work we’re doing with Google Cloud not only illustrates the portability and flexibility of our solution, but also makes it available to a new set of enterprise retailers who have complex needs and prioritize the ability to scale quickly,” Mohamood said.

For instance, for apparel clients looking to boost repeat-purchases in a specific product category, the Bluecore dashboard lets them see “predictive audiences to find customers who have never looked at those products, but have a propensity to buy them in less than 30 seconds, and automate a personalized campaign inside of our point-and-click workflows to test a hypothesis,” the Bluecore ceo said. This sort of effort would normally involve a coordinated effort between various staff from data science, analytics, marketing and merchandising.

“During Super Bowl 2017, the marketing team of one our enterprise footwear brands saw that Lady Gaga’s dancers were wearing their boots during the half-time show,” he explained. “[They] were able to go from opportunity to idea to production in a day.”