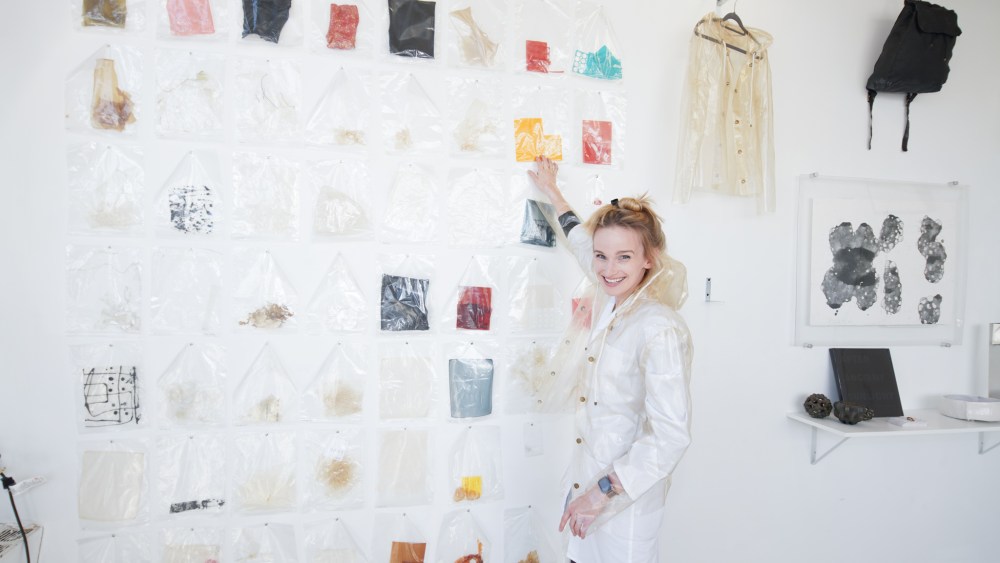 “Talk to me about color,” Phillip Lim said in his first meeting with Charlotte McCurdy, a researcher and designer best known for the carbon negative algae-based raincoat.

The two were introduced through the One x One initiative — run in partnership with the nonprofit Slow Factory Foundation, Swarovski and the U.N. Office of Partnerships — where they are now collaborating on a garment for Lim. A spokesperson for Lim said launch plans for the One x One project are still in the works, and the team anticipated the release to happen in September during New York Fashion Week.

Of course, that hinges on the results of the impending rework of traditional fashion calendars and the rebound of retail in general.

McCurdy recounts this standing in her light-strewn Brooklyn corner studio and lab space, wearing a megawatt grin and a white lab coat to, as she says, “indulge the press.”

It was early March, and before the coronavirus had gripped the city as it tore across the globe. Although today citizens are well versed in the protective needs of the medical community, McCurdy’s lab coat isn’t necessary as the glass jars holding watercolor pigments on her stainless-steel lab table at the center of the studio are food-grade —entirely non-toxic and vegan. The mineral and vegetable-based dyes she concocts are for the algae-alternative material she’s also creating. Although it’s technically a plastic, the material is without the petrochemicals and made instead of a mixture of algae extract and water, visible in the grid of swatches on the opposite wall.

They are beautiful failures, as McCurdy calls them; a vermillion swatch from beets, washed slate blue from tree bark and speckled turquoise created with mineral metal ion and flecks of mica.

There are two routes to take in exploring algae as a material: macroalgae or microalgae. McCurdy takes the former, but in either case the material is still many years from being able to mass produce a garment.

Why does it matter to look at lab learnings now? The raw materials stage accounts for 50 percent of fashion’s impact, according to the Pulse of the Fashion Industry report.  McCurdy may seem like a lone foot soldier alongside companies such as Nature Coatings, Pili Bio and others exploring sustainable alternatives, but her ideas are big and fashion needs scientific collaborators.

She explores “functional carbon culture,” including the potential of biomass material and bio-based dyeing techniques predating the Industrial Revolution — viewed from the perspective of an atmosphere away (she’s a systems thinker). A chart hung next to the transparent raincoats titled “Gas, Energy, Matter: Carbon” speaks to this vantage point, comparing the amount of carbon in the atmosphere, oceans, biomass and fossil fuels.

McCurdy agrees the focus should be on core research and development and scale. In fact, the technology exists to pull carbon out of the atmosphere (referred to as carbon capture) and create crude oil-free polyester. One of McCurdy’s favorites is The Coca-Cola Company-backed biotech firm called Virent, which in 2016 produced the world’s first 100-percent plant-based polyester T-shirts.

She’s not the only one enthusiastic about carbon capture.

One of the scientists who first sounded the alarm on a changing climate and popularized the term “global warming” — Wallace Broecker — was an advocate of carbon capture technologies. He died last year of congestive heart failure in Manhattan, but his perspective is retained in “The Uninhabitable Earth,” a popular book on climate change by journalist David Wallace-Wells which was spun out of his 2017 essay of the same name for New York Magazine.

“We’re in a Wild West in terms of these words. Phrases like carbon neutral, carbon negative, what an offset is? These are all underdefined terms — not regulated. The same thing that happened with the word organic with food 15 years ago, that’s happening right now with materials and if we get the definition wrong — we won’t have the impact we need to have on climate change,” McCurdy said.

For the record, she doesn’t like the word “sustainable,” as she prefers “regenerative” or being better than before — echoing the opinions expressed by a sample of sustainability leaders in WWD.

McCurdy believes dyeing and material techniques of the past ­— along with the technology of today — can be a solution of change for the future, and those at the forefront of this change will win out.