The future might belong to the most technologically advanced — and both the U.S. and China want to be on top.

By Evan Clark and Adriana Lee
with contributions from Sindhu Sundar
on January 22, 2020

A tech war could define the next phase of the U.S.-China relationship.

Phase One might be done — but the one-upsmanship between the U.S. and China is not over.

Even as last week’s tariff ceasefire marked the end of the first stage of the trade war, another simmering conflict for the future promises to shape the next decade or two.

Technology just might be the next big battlefront as Beijing and Washington jockey for geopolitical, economic, cultural and innovation supremacy.

Already there’s plenty of cross-Pacific tension over tech — and the stakes are high for fashion.

So far, much of the tech war has played out worlds away from the average consumer — with the countries most closely guarding the uber advanced systems used for national security — but it is an issue that cuts right through everything from quantum computing to online privacy.

Merchants and brands might not be on the extreme cutting edge, but they are becoming marinated in technology and taking it on themselves, developing automated warehouses, AI-aided fashion design, cashierless stores, bot-powered customer service and on and on.

“Technology — or more precisely who will dominate in areas like AI, robotics and 5G — is at the heart of the trade war,” said Stephen Lamar, president and chief executive officer of the American Apparel & Footwear Association. “Not only are these areas where the jobs of the future will be, but they will also be critical for the success of apparel and footwear companies looking for more efficient and cooler ways to interact with their suppliers and consumers.”

It’s a conflict on a different plain for fashion.

“Winning this fight will not come because we tax sweaters or boots made in China,” Lamar said. “Instead, it requires better investments in [science, technology, engineering and math] education coupled with smart immigration policy and effective multilateral alliances with like-minded trade partners to protect intellectual property and prevent forced technology transfer.”

The U.S. and China have sparred for years over intellectual property rights and technology transfers, which had American companies trading tech secrets for access to the Chinese market (issues that were at least partially addressed in last week’s trade deal). At the same time, consumer-focused companies with global scale — including  Amazon, Walmart Inc. and Alibaba — have all been developing technology as a competitive advantage, preparing to take each other on in a more connected world.

It’s a multifaceted conflict that can fly under the radar, lost in the day-to-day rush of doing business, chasing consumers and keeping the books balanced for another day.

“There is a huge tech war going on between the United States and China and we’re just not talking about it,” said Matt Rubel, former ceo of Collective Brands and a board member at Hudson’s Bay Co., during the National Retail Federation’s annual conference last week. “It underlies everything that will go on.

“We always looked at global marketplaces, what we can do, well guess what, some of our biggest things that we are creating today in technology are actually sequestered and protected, marketplace to marketplace,” Rubel said. “And that, in and of itself, is a trillion-dollar issue.”

It’s a war that could both go unnoticed and shape the future in a million ways. 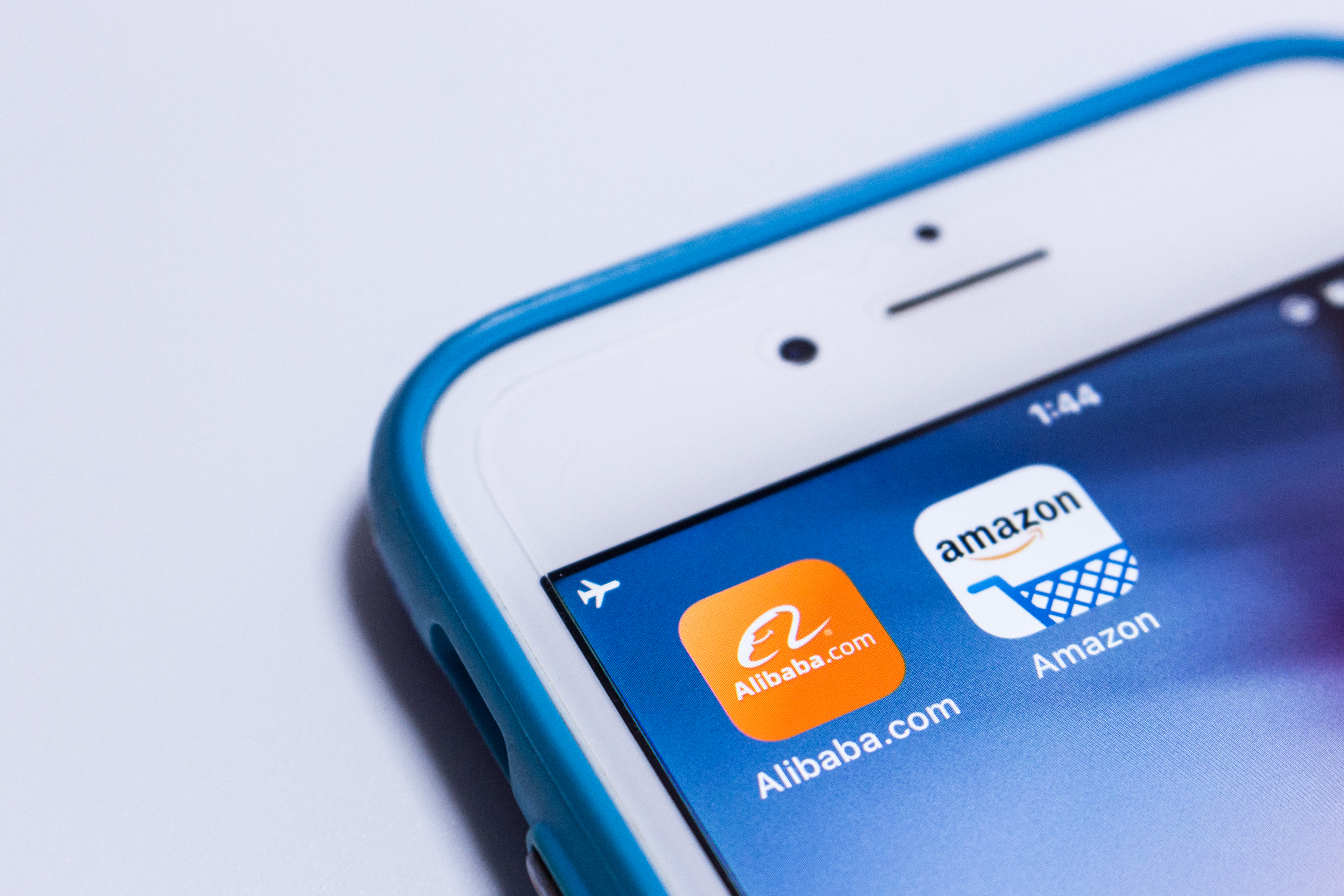 The future of fashion might well depend on who has the savviest tech.  Shutterstock / Koshiro K

“There will continue to be competition between these two economies and technology is not a thing on the side, it’s central to the future of both economies,” said Nicholas Ahrens, vice president of innovation at the Retail Industry Leaders Association. “Technology is absolutely essential to what it means to be a retailer in the 21st century, so there can’t help be a connection and an impact as we go forward.”

Two obvious pressure points are the switch to 5G — which promises to increase on-the-go download speeds by 100 fold — and artificial intelligence, which will help machines make sense of all that data collected over super-fast networks and serve up more-powerful recommendations.

Powering such digital marvels is a long and complex chain of suppliers and other technology companies that can find themselves in the geopolitical crosshairs.

China-based Huawei — which has become a target of obsession and suspicion for the U.S., landing a spot on the Commerce Department’s technology blacklist last year — is not only one of the world’s top smartphone companies, it’s also a leading maker of the equipment necessary for building 5G networks. To keep from losing control of this key technology, a bipartisan group of senators proposed legislation to funnel more than $1 billion to the development of Western alternatives for Huawei’s 5G tech.

Carolina Milanesi, an analyst with Silicon Valley-based Creative Strategies, said China wants to lead on both 5G and AI and is investing heavily in companies and their development.

“The Chinese regulators and government are really helping, fostering and and pushing this technology forward,” Milanesi said. “On our side, regulators are either not quite caught up with where the market is and what the technology is, or they’re trying to regulate — rightly so — before these technologies get out of hand.”

For 5G at least, there is some visibility going forward and the information superhighway of the future will look similar everywhere.

“The 5G standard that everyone’s building to is set in stone, it’s more of a race to get to the market,” said McGuireWoods Consulting’s Greg Guice, a former director of legislative affairs for the Federal Communications Commission.

Just what that race will look like remains to be seen, but it’s important to brands.

“This is going to be a different relationship with the consumer,” Guice said of doing business with the massive amount of data flow allowed over 5G networks.

For many on the U.S. side, the competition is a new dynamic. The U.S. may have spearheaded much of the innovation on these technologies, but China has gained in rapid deployment.

In the consumer space in particular, China has been moving fast and leapfrogged some of the retail development phases the U.S. went through as consumers aggressively took to e-commerce.

Taking advantage of this gigantic digital migration are some homegrown Chinese giants, including Alibaba and JD.com and Tencent — all of which are fixated on AI and synthesizing various elements of retail, entertainment and finance into a new kind of uber consumer product.

The Chinese e-commerce leader, Alibaba, for instance, live-streamed and hosted a Taylor Swift concert for its Singles’ Day shopping festival last year, when its Alipay app processed sales of $38.4 billion and its Cainiao Network handled 1.3 billion delivery orders in one day.

That kind of consumer connection at scale doesn’t happen anywhere else online. That is a function, in part, of how large the Chinese market is, but the size of the market can be a competitive advantage for native companies that can grow big at home and then move abroad.

And the Chinese system can empower businesses to move quickly.

While the U.S. is tentatively testing drone delivery, JD is deploying drones for rural deliveries in a network that reaches out 300 kilometers and is based in Shaanxi. It is also testing wheeled delivery robots in dense urban areas.

Already what it means to be forward-leaning digitally means different things in the U.S. and China and that might only continue.

The Council on Foreign Relations, a think tank based in New York, noted in a report last fall: “China is closing the technological gap with the United States, and though it may not match U.S. capabilities across the board, it will soon be one of the leading powers in technologies such as artificial intelligence, robotics, energy storage, fifth-generation cellular networks, quantum information systems and possibly biotechnology.”

Adam Segal, director of the digital and cyberspace policy program at the think tank, said: “The tech issues are not going away…there is a certain likelihood of a kind of splitting of the technology world around certain technologies, usually around 5G and increased competition over AI.”

That could make life harder for companies that have large amounts of data on U.S. citizens, such as TikTok, the China-based social media platform that has taken the U.S. by storm and raised privacy concerns.

While fashion brands don’t tend to have as much data on people as social media sites, they aspire to, and certainly look to platforms like TikTok — or any new site that suddenly captures the attention of millions — as commercial outlets of one kind or another.

There is also a chance that fashion and retail will be able to avoid the larger battles in the U.S.-China tech war.

“I would say that there is very little cold war going on around retail technology,” said Nikki Baird, vice president of retail innovation at Aptos. “AI would be the only place where there is the potential, and it’s just too immature at this point to be a point of contention in the retail market.”

Both markets have plenty to learn from each other, she said, with China’s voracious mobile consumers and video-based retail scene breaking new ground in shopping experiences.

“The two main digital behemoths do not really compete head-to-head — yet,” she said. “For most Western brands, Alibaba is an important stop on the way to opening the Chinese market, both through access to the market through Tmall and New Retail, and the Alibaba cloud is an important part of navigating data requirements in China, particularly around customer data. Amazon does not have that relationship or level of partnership with brands and has struggled there.”

Alibaba’s success in China has been tough for the company to replicate in the U.S. — making for a face-off of a different sort. “If there is a cold war going on there, I would say it’s happening more in other geographies where they run into each other, rather than any direct competition in home markets,” Baird said.

But now nearly every brand is looking at how to go global and who to partner with as they try to take over the world.

“You have to look for global partners, those who are global, yet localized,” said Deborah Weinswig, founder and ceo of Coresight Research. “You need to look to someone who’s going to be a long-term partner because people are making enormous investment decisions right now. There are certain brands, technology providers that you should feel comfortable working with and others maybe less comfortable with.”

Cutting a big deal now on anything involving technology could be akin to choosing a side in a larger fight that’s just getting under way.