How Sriram Krishnan and Aarthi Ramamurthy Blew Up on Clubhouse

Hosts of the influential “The Good Time Show” on how it started and its guests, from Elon Musk and Mark Zuckerberg to DVF and Virgil Abloh.

Aarthi Ramamurthy with Sriram Krishnan, hosts of "The Good Time Show" on the Clubhouse app.

Becoming Clubhouse influencers wasn’t necessarily the goal for Sriram Krishnan and Aarthi Ramamurthy; the couple just wanted to have some fun, host interesting conversations with their friends and see what happened.

But with friends like Mark Zuckerberg and Elon Musk, those little chats were bound to grab attention — and they did, turning their Clubhouse series, “The Good Time Show,” into an influential program on the app featuring high-profile guests from tech tycoons to celebrities like Tony Hawk and fashion luminaries like Diane von Furstenberg, Sonam Kapoor Ahuja and Virgil Abloh.

In other words, what started as a fun hobby turned into a phenomenon, with a fanbase soaring to some 450,000 followers in just four months.

“This wasn’t planned at all,” Krishnan explained to WWD. “Aarthi and I have been together for almost half of our lives; we’ve been married for over a decade. And during the pandemic, this was just a kind of a pet project that we thought might be fun to do.

The idea for the show was born out of the couple’s usual routine, which gives them down time at night to check in with each other about their day and talk about the news or other interests. The show naturally slotted into that behavior. It also came about, because Krishnan and Ramamurthy realized that they missed seeing their friends, so they wanted to open up the conversation.

“We had no idea that it was going to blow up. We just started with something as usual — after we get our two-year-old down to bed, we’ll host conversation just because, during the pandemic, we’re not able to see a lot of the people we usually see,” Krishnan added.

The pair was inspired by the late-night show format, and if the talks remained similarly light and chatty, the series might have gone largely unnoticed. But it didn’t, especially when the conversations wound up breaking news.

In an early spot, Elon Musk wound up talking bitcoin in a session that included Robinhood’s Vlad Tenev, all during a time when the stock-trading app headlined every major financial publication. Zuckerberg’s February appearance yielded another juicy tidbit for the press when he proclaimed that augmented and virtual reality are the future of remote work.

”We should be teleporting, not transporting, ourselves,” he said, in an off-the-cuff comment that could have been custom-crafted for the headlines.

Such high-profile tech guests aren’t entirely surprising, given Krishnan and Ramamurthy’s deep tech cred. Krishnan, a partner at Andreessen Horowitz, has held leadership stints at places like Twitter, Snap and Facebook. Ramamurthy worked at Netflix and Microsoft, as well as her own YCombinator-backed tech start-ups, and is now a product executive at Facebook. 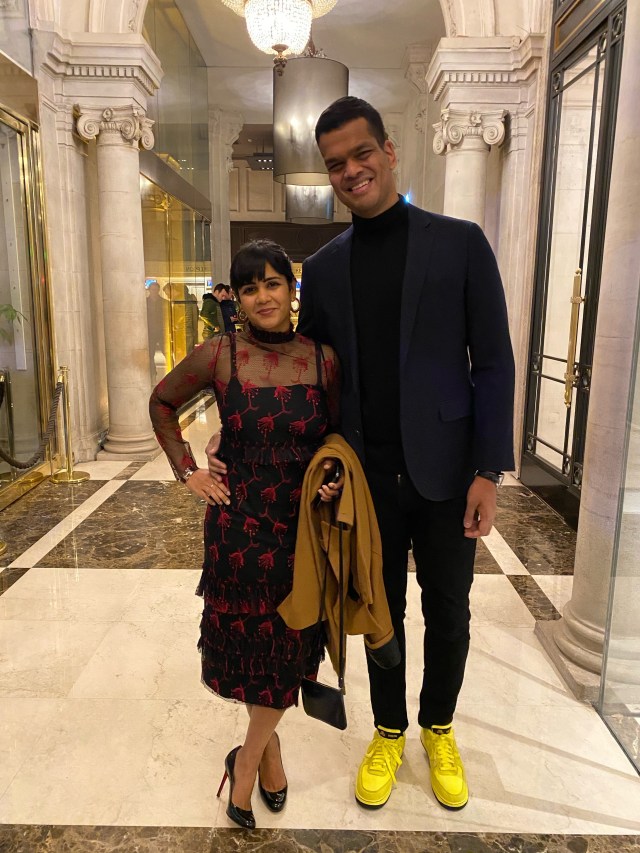 Although Krishnan’s firm is a major backer of Clubhouse, and Ramamurthy’s employer is reportedly working on a Clubhouse competitor, both are very clear that the show is their own personal passion project, with no affiliation whatsoever with their day jobs.

Still Paul Davison, the elusive Clubhouse cofounder, is clearly clocking the show. In the latest episode Saturday morning, Davison was among guests that also included Virgil Abloh, who joined the conversation while simultaneously boarding a flight.

The designer talked about everything from his teen years and interest in architecture and how it led into his fashion career, as well as how the Off-White brand got its name. “It’s a refusal to subscribe to black or white. It is acknowledging that there’s something in between that is OK,” he said in the chat. “I think that my career is fused with that 17-year-old spirit that was like, I could be an architect and a fashion designer. I don’t have to be one.”

It was the sort of detail that Abloh fans may not have realized, and it helps makes for an intimate-feeling conversation. He also shared his thoughts on one of the latest tech trends in fashion: NFTs, or non-fungible tokens, a one-of-a-kind digital asset that can fetch a high value or price due to its uniqueness. NFTs have caught fire across sneaker drops, and it’s captured the fascination of the premium fashion brands.

While he didn’t commit to a future offering from Off-White, he also didn’t negate the idea. “I love the dialogue around NFTs,” he said. “I love that it’s bringing digitally native communities to the limelight. What that might look like, I don’t specifically know, but I think it’s a call to action to sort of make them great.”

Virgil Abloh already has 3.2 million followers on Clubhouse, so it’s no surprise that a session featuring him would have high attendance.  Courtesy image

Abloh’s on-the-fly guest spot underscores the basic and crucial proposition of Clubhouse’s lightweight approach to hosting, speaking or joining rooms. Anyone can do it, anytime and apparently anywhere. Just fire up the phone, join in the app and potentially drop some news.

Of course, would-be influencers flock to the platform now, trying to figure out how to intentionally do what Krishnan and Ramamurthy have accidentally done. But the magic — and the frustration — with their approach is that there’s no specific blueprint or formula.

It certainly helps to have genuine curiosity in what the guests have to say, whether it’s about culture or what it takes to build a technology or business. But so does being a power couple with famous friends, and that’s not so easy to replicate.

“For us, it’s been a lot of fun. We’ve learned a lot. And for the guests here, since we are connected to them, we have access to them, it just gives them a really good space that lets them talk about what they do and talk about their craft,” Ramamurthy added. She marvels in how there are similarities between the way founders in fashion and technology go about building their concepts.

It’s understandable if this embrace of the creator vibe is appealing for guests. Now the couple doesn’t have to solely rely on their circle of friends — The Good Time Show’s programming and social currency bring famous people to its digital doorsteps, requesting guest spots.

How long the buzz will last remains to be seen, though. Timing has clearly been a factor in the show’s popularity, which has climbed as Clubhouse reaches peak hype. During the Saturday session, attendees maxed the room’s 5,000-person capacity, and others have required overflow rooms.

Part of that is due to the app’s audio-only premise, which offers a welcome respite during a period when locked-down, screen-fatigued consumers might be grateful to just close their eyes and listen in, without having to disconnect completely.

But pundits and so-called tech experts are already musing about Clubhouse’s fate once health restrictions lift and people can return to restaurants, events, travel and other things.

What happens then to Krishnan and Ramamurthy’s pet project may have less to do with their excellent conversational skills than the platform that houses it. They could, of course, carry on via podcasts or on YouTube. But it wouldn’t be as easy for celebrities to jump in while they’re, say, boarding a plane.

Ironically, the topic itself would be good fodder for a Good Time Show episode.