A new case accuses the e-commerce company of barring merchants from offering lower deals on other platforms, artificially inflating prices.

Is Amazon a monopoly? The question drives to the heart of the e-tail giant’s latest legal quandary, an antitrust lawsuit brought by Washington, D.C., attorney general Karl Racine, revealed Tuesday.

The complaint accuses Amazon of breaking antitrust law, putting third-party merchants under agreements that prohibit them from selling products at better prices in outside platforms. That ultimately raises retail prices with “an artificially high price floor,” according to a statement, which dampens competition, harms consumers and sellers and stifles innovation and choice.

“Amazon has used its dominant position in the online retail market to win at all costs,” Racine said in a statement. “It maximizes its profits at the expense of third-party sellers and consumers, while harming competition.”

Characterizing the situation as illegal and unfair, Racine wants to end the practice and put Amazon on the hook for damages and penalties. It also opens the door for a break-up of the company or some of its operations through so-called “structural relief.”

When reached for comment, Amazon took aim at the fundamental premise of the lawsuit.

“The D.C. attorney general has it exactly backward — sellers set their own prices for the products they offer in our store. Amazon takes pride in the fact that we offer low prices across the broadest selection, and like any store we reserve the right not to highlight offers to customers that are not priced competitively,” a spokesperson said in a statement provided to WWD.

And, the person added, “The relief the AG seeks would force Amazon to feature higher prices to customers, oddly going against core objectives of antitrust law.”

Amazon requires sellers to conform to its business solutions agreement which, until two years ago, included a “price parity provision” — a clause that barred merchants from selling their goods for less money in rival e-commerce marketplaces.

The company pulled the clause in 2019, but that didn’t spare the business from regulators’ intensifying scrutiny over potential anticompetitive behavior. Chief executive officer Jeff Bezos landed in front of Congress for the first time last year to face an array of pointed questions — from how the marketplace operates to whether the company uses seller data or otherwise tilts policies to gain an unfair advantage. 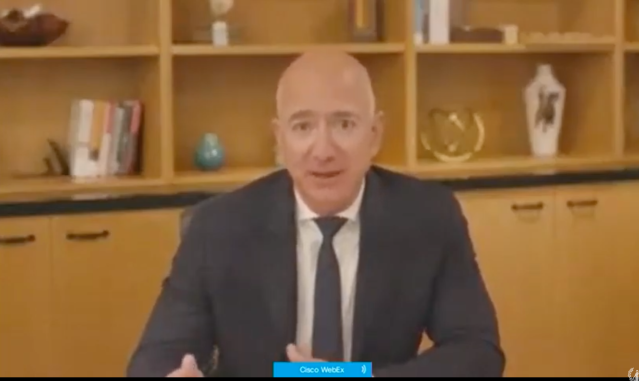 It may not have helped that Amazon didn’t actually kill the clause, but rather, according to the case, swapped it for an equally anticompetitive “fair pricing policy” that levies sanctions on merchants who offer their products in other online marketplaces for less.

In public comments, Racine said the maneuver amounts to a “bait and switch” intended to turn down the heat from Congress.

The suit is just the latest in a string of antitrust cases targeted tech companies, which have also snared Google and Facebook. Meanwhile, this week, Apple has been facing down a courtroom drama brought on by Epic Games, which sued the iPhone giant over its alleged monopolistic approach to its App Store and payments services.