Diane von Furstenberg livestreams for her latest collab — a trio of Echo Dots swathed in her signature style via Amazon crowdsourcing.

Diane von Furstenberg is taking to the digital airwaves with an Amazon livestream Wednesday morning to talk about her latest project — a collaboration bringing her signature style to limited-edition Echo Dots created through Amazon’s “Build It” crowdfunding program.

The program’s model mirrors that of Kickstarter and other crowdfunding platforms, in that customers interested in a product concept can preorder to signal interest and won’t be charged unless a predetermined goal has been reached within 30 days. Amazon doesn’t publicize specific goals, but it does show a fundraising meter expressed as a percentage on Build It webpages.

The livestream could boost the numbers for this particular campaign and ensure the devices go into production. The designer is slated to join model Sophie Sumner on Amazon Live at noon Eastern on Wednesday.

As for the spherical devices, the three limited editions are identical to standard Echo Dots on the inside. The difference rests solely on how these Alexa-equipped units are swathed on the outside, with DVF’s design sensibility.

Three styles of Echo Dot x Diane von Furstenberg will be on offer via preorder — Twigs, Ikat and Midnight Kiss — for a promotional price of $59.99 each. Preorders close on Aug. 13 and, if the goal has been reached, production will immediately follow, with units slated to ship between December 2021 and March 2022. 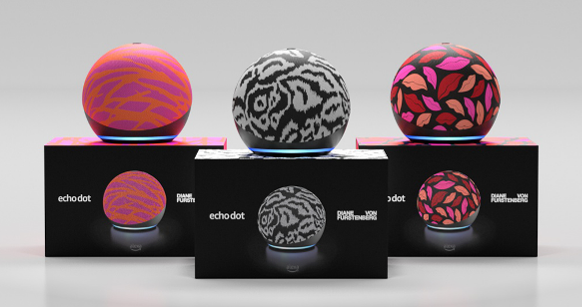 Von Furstenberg has been a proponent of technology for years. Known throughout the tech sector as an early champion of Google’s first wearable, Google Glass, in 2012, she struck business partnerships with major technology companies like Salesforce — including one for DVF 360 in 2018, which offered digital and in-store shoppers a virtual tour. Last year, the brand worked with MasterCard to bring augmented reality into its Manhattan flagship, making product recommendations and information available to customers with the scan of a QR code.

Meanwhile, over the past decade, the fashion house has extended into home goods, from an exclusive arrangement with Bloomingdale’s back in 2011 to, most recently, Hennes & Mauritz AB. The new home collection arrived at H&M Home in April.

At the time, von Furstenberg explained that “the home is both a relaxing and empowering place where you can really ‘own’ a look or feel. With this collaboration, I want people to take charge of their home decor. The only rule I have is that your home should reflect who you are. The main point is to create a space that you’re incredibly comfortable in and is a true expression of your personality.”

Her work with Amazon’s Echo Dot appears to bridge her penchant for tech and home decor in one petite package. It’s also an opportunity to help charity: To celebrate the partnership, Amazon is making a donation to Vital Voices, a nonprofit chosen by von Furstenberg, to benefit women leaders tackling the world’s greatest challenges.

The DVF partnership marks Build It’s sophomore effort. The first, which went live in February, paraded a variety of new Amazon concepts for Alexa devices in front of the public: A Smart Sticky Note Printer, a Smart Nutrition Scale and a Smart Cuckoo Clock. Only the printer reached its goal, and the product is now being built.

Build It itself also appears to be a work in progress. It was born out of the company’s Day 1 Editions program, which created the Alexa-powered eyeglasses, the Echo Frames. Heartened by positive early customer feedback on the tech, the company released the connected glasses last year and used that experience to craft the new program.

In a blog post announcing Build It in February, the company described the initiative as a way to give consumers a chance to “weigh in on which devices we build next.” That may be true, but for Amazon — which makes everything from gadgets and kitchen carts to apparel — understanding what consumers want is invaluable, especially prior to production.

It’s a lesson learned by others hunting innovation in consumer products, such as Procter & Gamble, which uses crowdfunding platforms as a research and product development tool.

For now, Build It is limited to Amazon’s devices. But if it proves popular and continues to be valuable, there’s little reason not to apply it other types of Amazon products.