EBay's AI and machine learning push continues on, as it touts new personalization and discovery.

EBay outlined some of its upcoming projects Thursday, as it touted its personalization features in a new company blog post.

The e-commerce company, best known for its auction listings, offers a mix of both resale and new products totaling 1.2 billion items and serves as many as 180 million customers. Personalization at that scale simply can’t be a purely human endeavor. It’s one reason why rivals like Amazon have been major proponents of machine learning and artificial intelligence.

Likewise, eBay has been doubling down on its own efforts in AI, machine learning, computer vision and other related technologies.

In its list of ”10 Ways eBay Is Creating a More Personalized Shopping Experience,” the company summed up a few of its visual shopping and image search capabilities, among other things. It also tipped its hand about new features, such as “Trending in Your Interests” and “Buy Again With One Click,” as well as new save features.

“Things trend on eBay because as the world talks about it, they shop for it on eBay,” wrote Bradford Shellhammer, the company’s vice president of buyer experience and general manager of eBay New York. “We understand customer interests, from sneakers to fashion, and are beginning to merge the two….Finding trends within the world of what matters to you keeps recommendations fresh and timely.”

As an example, Shellhammer explained how a sneakerhead might see a special “Game of Thrones” edition of the Adidas Ultra Boost, rather than the standard version. “We would highlight to you what enthusiast sneakerheads are coveting that week,” he explained. 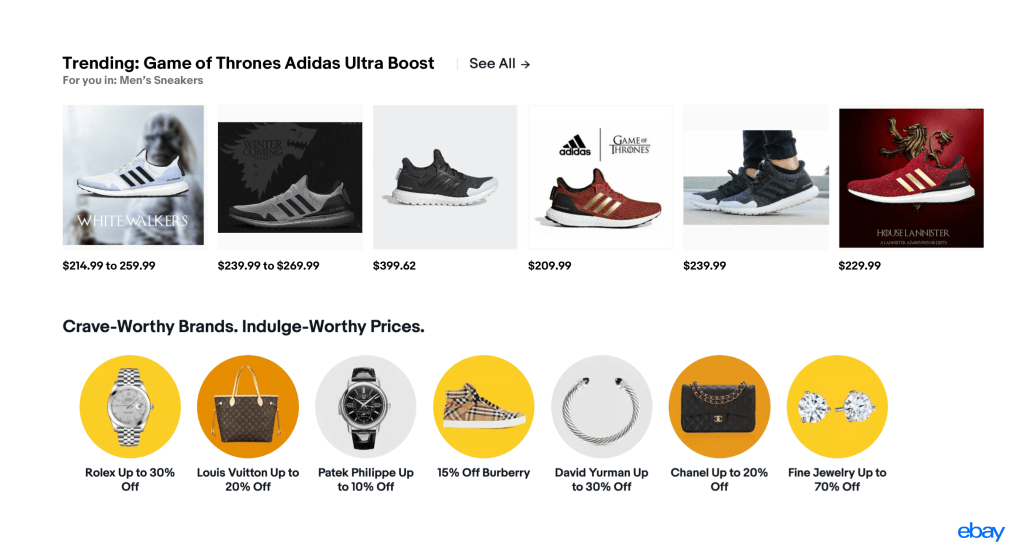 If eBay knows the customers is a “sneakerhead,” it can find what’s trending in that category and feature it for the user.  Courtesy image

The single-click “buy it again” button allows customers to shop their purchase history, so they can repurchase easily, without searching. if the product is no longer available from the same seller, the system pulls up the option to “buy similar.”

“Through this feature, eBay’s search algorithms will surface similar inventory, often the same product sold by a different seller, the same product in a different variant (think of the same sneaker in different colors), or a similar product (like a different running sneaker from the same brand),” Shellhammer continued. “As we learn more about your buying patterns for your favorite products, we will remind you to Buy Again when the time and price are right for you.”

The company is also trying out new Save options, along with e-mails that prompt customers to save sellers they’ve shopped before, personalized promoted listings and personalized homepages. The latter is coming this summer and fall that customize based on regional shopping patterns, user demographics and sales or promotions. 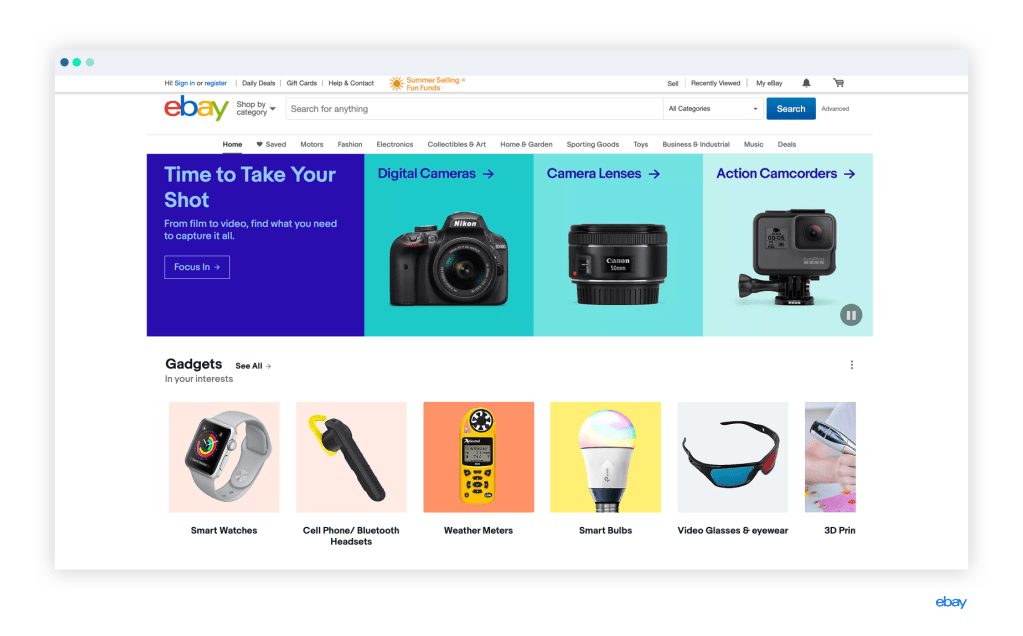 The updates represent an evolution from various personalization efforts, including eBay’s “Storefront of you,” which basically creates a personalized online store based on the shopper’s interests.

And if there are no historical interests to track, as in the case of new visitors, eBay can still recommend items. The company is “training our algorithms on new buyer preferences and choices,” Shelhammer added. “We know that buyers who are visiting eBay for the first time have distinctly different shopping preferences as compared to our existing, tenured buyers. In Search, we are actively working on delivering a tailored customer experience for our new buyers…”

EMarketer ranked eBay behind Amazon for its share of the U.S. retail market. But there’s a lot of air between the Seattle-based e-commerce giant’s top spot and second place: According to the firm’s projections, Amazon is expected to generate roughly 38 percent of all U.S. retail e-commerce sales this year. EBay clocked in with 6 percent, ahead of Walmart’s 4.7 percent and Apple’s 3.8 percent.

It seems eBay has been trying to close the gap, methodically tackling every friction it can find with AI. The efforts seem to have gotten under Amazon’s skin.

In Amazon’s April shareholder letter, chief executive officer Jeff Bezos took a swipe at its e-commerce rival, stating that third-party sellers “do so much better selling on Amazon than they did on eBay” because of the comprehensive tool sets Amazon has developed. Bezos also said that, between 1999 to 2018, his marketplace’s third-party sales growth left eBay’s in the dust.

EBay president and ceo Devin Wenig was not amused.

While I appreciate the ink dedicated to @ebay from the ceo of the company not focused on competition, think I”ll dedicate my letter to customers, purpose and strategy. We don’t compete with our sellers. We don’t bundle endless services to create barriers to competition.

That may or may not have spurred the company to expand its roster of tech initiatives, but regardless, the list seems to be growing. EBay has been dabbling in an array of areas, from rethinking how it codes — a decision to ditch JavaScript for another programming language sped up its web app by as much as 50 times — to stepping in as a founding member of cryptocurrency initiative Libra Association, alongside Facebook.

EBay also points out a fundamental difference between its platform and other major marketplaces. In its first-quarter earnings report in April, the company noted that it doesn’t compete against its sellers.

Steve Wymer, eBay’s chief communications officer and head of global impact, publicly reiterated the message recently in what looks like a subtle dig at Amazon: ”We don’t compete with our sellers, and we don’t have our own inventory. We’re a pure marketplace,” he said. “We succeed when our sellers succeed.

“Our whole goal is to help our sellers find the right buyers,” he said.