EBay Takes Authentication on the Road

EBay's drive-in authentication station has set up shop in Atlanta and Nashville for limited times in April.

When eBay expanded its authentication service to include sneakers, the company hosted a three-day pop-up in Los Angeles last fall to unveil the service.

This month, the company took the service on the road with Authentication Nation, a traveling pop-up where consumers can have their luxury watches, sneakers and trading cards authenticated on the spot.

The first stop in Atlanta on April 9 and 10 was similar to the L.A. pop-up in November 2020 with a drive-in station hosted by third-party authenticators Sneaker Con for sneakers and Capetown Diamond for watches that evaluated the items in front of collectors. NBA star Trae Young of the Atlanta Hawks attended the event to showcase his watch collection that included brands such as Rolex, Cartier, Hublot and Tissot.

Each collector was allowed one item to be evaluated and receive an estimation. They could then opt to list their item for sale or take it home.

Marquez, who joined eBay in January, said the event is a way to “get the news out that we’re authenticating,” which is something that’s been missing from eBay since the beginning. Although the company sought to build trust with user-submitted seller ratings and transaction reviews, some consumers were still hesitant to use eBay. 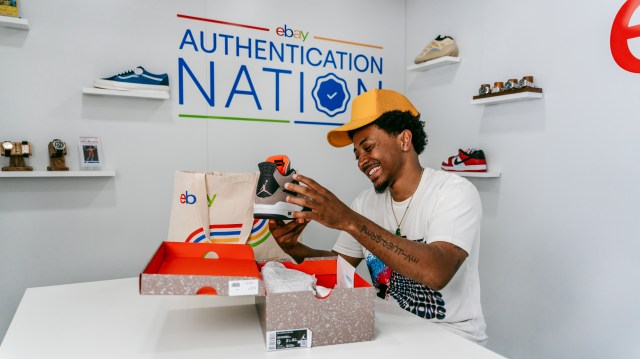 When it comes to sneakers, StockX, Goat, Stadium Goods and others have built global businesses by authenticating items and giving a seal of approval, but long before these businesses launched in the mid-2010s, consumers bought, sold and traded goods through eBay.

Although eBay launched authorization for watches in 2018, the extension of that service into sneakers was necessary to keep pace with these other companies. “Authenticity is critical in collecting,” Marquez said. Even so, the site is a big player in the business, selling 7.69 million sneakers and 4 million watches in 2020.

“We’ve had a really passionate community that said what we do well and do not do well,” she added. “They’ve said I want to shop with you but [while] I trust you, I don’t know about the seller. There are generations of consumers that are open to a business model like ours, working in the sharing economy, comfortable working with strangers than the previous generation might not have.”

EBay has not said the next cities that will host its authentication pop-ups, but Marquez said the company is focused on bringing awareness to underserved collector communities such as female sneakerheads and young watch enthusiasts, who are “craving some real authenticity,” hence the association with Trae Young.

Looking ahead, she said eBay is exploring adding more categories in the luxury space to its authentication program, including jewelry and handbags. It is also exploring blockchain technology and digital assets such as non-fungible tokens, or NFTs, but does not have anything official in the works.