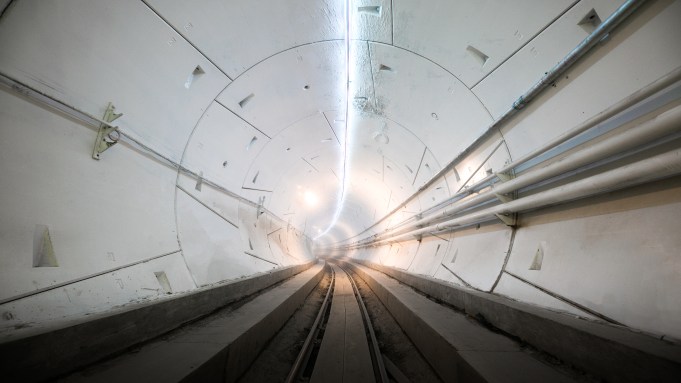 The core a glossy white, none would suspect a mile-long tunnel, 30 feet underground could house such pristine interiors unless under the guardianship of Elon Musk, celebrity billionaire entrepreneur and inventor better associated with Tesla and SpaceX, and The Boring Company, and a hyper-acute radar for cleanliness and presentation, even underground.

After revealing the completed “test tunnel” prototype last night in Hawthorne, Calif., the headquarters of both The Boring Company and SpaceX, which is aptly located on Rocket Road, it’s clear innovation in transportation is not on the back burner.

The demo night was invite-only, with some reporters gaining access, as the tunnel tour is also by invite-only, but unnamed sources reveal celebrities are frequently on the list. Involved in the demo night, guests were given a Tesla ride through the tunnel, which operates by retractable wheel gear pivoting a car into a rail-guided train and repeating back again.

While in the early beginnings, the planned East Coast Loop, from which the West Coast prototype is modeled, is to be a “high-speed underground public transportation” allowing autonomous electric skates traveling at 125 to 150 miles per hour. More so, there is the potential to carry between eight and 16 passengers, according to The Boring Company’s web site.

For any unfamiliar, The Boring Company sports an ironic double meaning — whereby tunnels are bored, but nothing is ever boring — Musk crowdfunded millions for the tunnel construction with the consumer-pivoted flamethrower, selling 20,000 units, the hat — topping off with 50,000 units sold.

While Musk invites a certain controversy, there is no uncertainty over his pleas for building, or boring, a better future.