At the virtual Facebook Connect conference, chief executive officer Mark Zuckerberg revealed that the company’s work with EssilorLuxottica is bearing fruit, with a highly wearable — and stylish — set of smart glasses planned next year.

The technology company revealed a multiyear partnership with Luxottica, with which it will build and release the first pair of Facebook smart glasses in 2021. Zuckerberg didn’t go into full product details, but described the effort as “the next step on the road to augmented-reality glasses,” an initiative dubbed “Project Aria.”

Facebook’s collaboration with the eyewear giant has been known for at least a year, but previous expectations circled around a launch in 2023 up to 2025.

Those expectations aren’t necessarily wrong. The current announcement is all about connected smart glasses, not full AR eyewear. Zuckerberg didn’t offer product details on Wednesday, so it could be merely about capturing images and video, not unlike Snap’s Spectacles, or dishing alerts for messages and other notifications.

An AR experience has the potential to read and interpret the outside world and layer relevant information over the user’s view of it, along with other data and visuals.

Analysts looking for a commercial-ready launch of the latter will probably have to wait a little longer, as development on AR glasses is still in progress. Currently, Facebook’s internal testers and researchers are out testing them out on campus and in the real world.

But it’s crystal clear that AR is the ultimate destination.

“The goal here is to develop some normal size, nice-looking glasses that you can wear all day and interact with holograms, digital objects and information while still being present with the people in the world around you,” Zuckerberg said in his keynote. 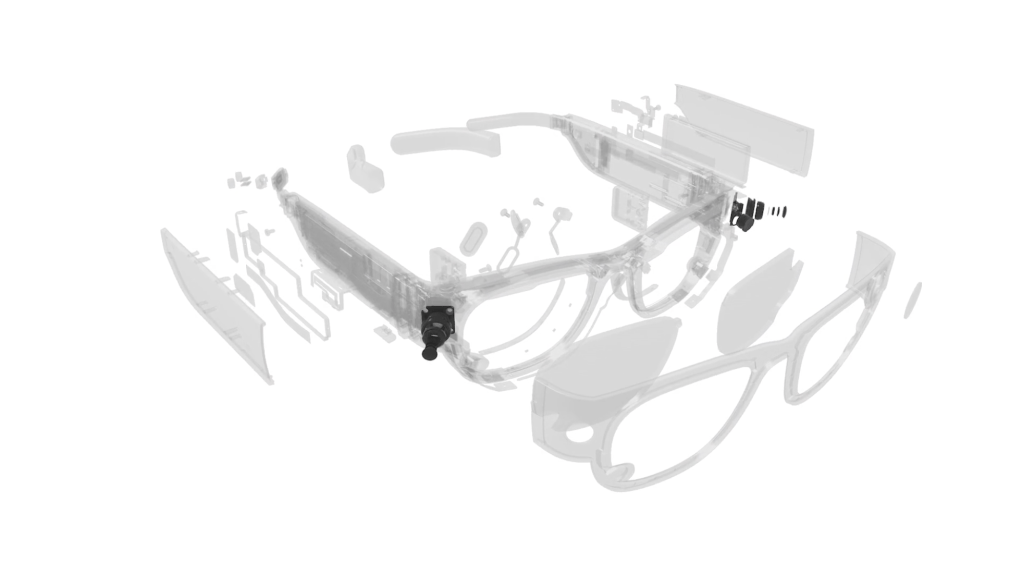 “Maybe you want to just sit on your couch and have a friend teleport and have their holograms sit right next to you to play games or just talk or hang out. Maybe you’re walking somewhere and you want directions or you see something awesome and you want to share it without having to take out your phone,” he continued. “Maybe you don’t want to have to carry your phone around at all, or have to worry about having it take you away from the moment, you’re gonna be able to do all of this with a pair of glasses.”

According to the ceo, the company has already developed the technology for smart glasses, though the development is not quite there for AR-capable features yet.

But either way, he seemed to acknowledge that techie glasses won’t fly if no one wants to wear them — a lesson, perhaps, from Google’s flop Project Glass, a cyborgian-designed face lens that once kicked up numerous privacy concerns — so the Facebook cofounder flew to Milan to meet with Luxottica.

“They’re the best in the world at making glasses. They make RayBan and Oakley, and they design and build frames for everyone from Armani to Versace,” he added. “And after spending time with their team and visiting their factory, I knew that they were the right partner for us to help bring the best technology together with the best glasses.“

Luxottica seems thrilled to position itself as an innovator in the wearables space.

“We are especially proud of our collaboration with Facebook, which projects an iconic brand like Ray-Ban into an increasingly digital and social future,” said Rocco Basilico, chief wearables officer at Luxottica, in a statement. “Combining a brand that is loved and worn by millions of consumers around the globe with technology that has brought the world closer together, we can reset expectations around wearables. We are paving the way for a new generation of products destined to change the way we look at the world,”

When the first product debuts in 2021, it will arrive under the Ray-Ban brand. Product images, name, specs, features, pricing and specific launch dates will be revealed later, the company said.

Of course, Facebook wasn’t done talking about AR.  Later in the online event, Facebook executives pointed to various AR experiences across its apps, including virtual makeup try-ons in Facebook ads and with some Instagram partners. The implication is that its Facebook Reality Labs is deeply considering the retail experience in its AR development.

The conference, which used to be focused on Oculus development, naturally covered more than just AR. VR updates include a new Oculus Quest 2, the next-generation headset and controllers, new tech-to-human interfaces using wrist gadgetry or even bare hands, quantified fitness tracking across VR apps, more realistic visuals, opening up of Oculus avatars to third-party developers — which can be used across Facebook’s apps, like Instagram — and beefed-up social interactivity within the Oculus world.

The event also nodded to the need for privacy, an issue that predecessors like Google’s Project Glass ran into, with public outcry over devices that can record people without their knowledge. Facebook committed to what it calls “responsible innovation,” and the company, ever the target for privacy advocates, pointed out that people’s faces, license plates and other sensitive real-world information will be blurred.

It’s hard to miss that these declarations come as celebrities like Kim Kardashian, Sacha Baron Cohen and Mark Ruffalo are boycotting Facebook and Instagram on Wednesday in support of #StopHateForProfit, a movement that calls out the platforms for their failures to mitigate disinformation and hate speech.

This context aside, the company’s work is fascinating for multiple reasons. AR’s potential in retail is one thing. But tech analysts and experts will be keeping an eye on any ripple effects in the wearables sector, as well as the mobile industries.

Companies like Samsung and Motorola seem fixated on pushing the limits of the smartphone experience, with new form factors like folding or bending phones. In contrast, Facebook is focusing efforts on the sort of futuristic computing tech that could replace phones altogether someday, or minimize it. Notably, Apple hasn’t bought into the folding trend yet. But the iPhone maker, a major proponent of AR, is expected to announce its own AR glasses at some point.

Andrew Bosworth, vice president of augmented and virtual reality at Facebook, may have summed the need for the technology best:

“Our digital experiences are still mediated by heads-down, eyes-down handheld devices, and at Facebook Reality Labs we ask ourselves, what if that was no longer the case?” he mused.