As the appetite for luxury resale grows among consumers, competition is getting fierce among sites.

Sarah Davis envisions the day when brands such as Hermès, Chanel and Louis Vuitton partner with luxury resale ecommerce sites such as Fashionphile, the company she founded in 1999, recognizing that circularity matters to consumers, and that the the sale of an unwanted item frees up room in closets for something new, bringing sales back to the brands.

If the idea of closely held French couture and ready-to-wear house Chanel (which is already suing Fashionphile competitor The RealReal and What Goes Around Comes Around), or luxury groups like LVMH Moët Hennessey Louis Vuitton, Compagnie Financière Richemont or Kering hooking up with the 20-year-old Fashionphile sounds a little far-fetched, it would be a mistake to discount Davis.

The fact that most luxury brands don’t sell handbags, fine jewelry and very expensive watches online is by all intents and purposes an engraved invitation to Fashionphile and similar sites to sell “gently used” products to consumers who don’t have access to brands’ boutiques, which are typically in major cities and very selective secondary and resort markets.

“Louis Vuitton was the first to sell online, Chanel, Hermès and Goyard are forcing consumers to resell and losing hundreds of millions of dollars to recommerce,” Davis said. “We want to get into the game. We want to say, ‘We can help you.'”

The speed-talking, raspy-voiced Fashionphile president is, by her own admission, brash and driven. “I was a debate nerd,” said Davis, who went to law school, which has served her well in her current business. “It does a really good job of teaching you how to critical-think, and it gets you to argue both for, and, against [something, on both sides of a argument]. It’s good to see that rational people can agree on things.

“I’ve always been really scrappy,” Davis said. “My mom would call me, ‘industrious.’ In college, I bought a pair of clippers and cut boys’ hair for $5. It was a good way to meet boys. Hey, I was trying to make some money.”

Some retail experts have said luxury brands don’t need sites such as Fashionphile and that they can resell on their own. Davis disagreed, pointing out that authenticating products “takes so much data. We have the infinitely long tail of data, and then at the end of the tail, there’s the one-off unique things.

“We trained an algorithm to recognize when there’s a change in the velocity of sales. We sold the Dior Saddlebag for 10 years, and we didn’t even put it on our main site,” Davis said. “Then, all of a sudden the computer started recognizing the velocity of sales. Our team picked up on that and adjusted the price accordingly.”

Neiman Marcus in April bought a minority stake in the company, which Davis said is on target to hit $200 million in gross merchandise volume this year, representing year-over-year growth of more than 50 percent. “We’ve always been profitable,” Davis said. “When you’re spending your own money, you’re really careful.”

Davis declined to comment about a recent opinion piece in WWD, “Think Tank: What Is Neiman Marcus Doing? Fashionphile Is the Wrong Path to Resale,” other than to say, “The best response is to show people that the partnership works. The Neiman [Marcus Group chief executive officer Geoffroy van Raemdonck] is so insightful and has such deep experience in the luxury industry, he’s trying to right that boat.”

Neiman’s became the first major luxury retailer to invest directly in the rapidly growing resale segment, which by some accounts is expected to reach $23 billion by 2023.

Neiman’s will open Fashionphile salons at some of its stores. Davis explained the seamless experience being created for consumers who will theoretically “drop three bags at the counter at Neiman Marcus, go to lunch with their girlfriend and come back a few hours later and pick up a check for $2,000.

“When the Neiman Marcus deal happens and we develop these synergies, people will see that the Fashionphile customer brought us bags and took their commission and spent it at Neiman Marcus. When you give people an easy way to resell and pay attention to the value of their products, you’re informing them,” Davis said, sounding like Julie Wainwright, ceo of The RealReal, whose initial public offering saw the firm’s share price jump 44.5 percent to $28.90, giving the company a market capitalization of $2.49 billion.

Claiming that she was “the very first in the luxury recommerce space,” Davis said, “Fashionphile’s proven business model continues to lead the category it invented with its original direct-to-consumer model that allows direct access to the world’s most coveted accessories.” 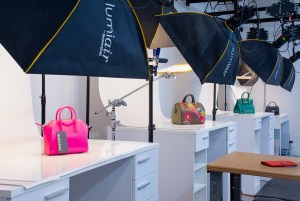 With The RealReal’s success, Davis may be understandably sensitive about her legacy, and gives subtle slights to the larger luxury resale e-commerce site. “Buy less, but buy well. You don’t need to buy more,” she said when asked her opinion of slow shopping. “Honestly, we have such a great platform.”

In response to a question about competition from other resale sites, Davis said, “I’m not concerned about models that have more friction than [we do]. A department store can’t have people dropping off trash bags of things to sell. When we started Fashionphile, it was just us. Competition makes you hungry or you’ll die off. We have such a laser focus on our little niche of ultra luxury.”

Is an IPO on Davis’ radar? “We’re not there yet. I’m old-school. We have more runway ahead, before we need a bunch of money plowed into the business,” Davis said. “I’m totally open to an IPO. Our ceo Ben Hemminger and I were first approached in 2007 by investors, and we said, ‘Why? We’ve got no [chief financial officer], no [chief marketing officer] and no chief operating officer. We should get our act together.’ We reached out to private equity groups and that’s when Neiman Marcus came in. They gave us the money we were looking for and all the synergistic things.

“When we partnered with Neiman Marcus, we never had a marketing department,” Davis said, noting that Fashionphile has added organic growth through its relationships. “If you want to buy a $15,000 Birkin bag from us, we know who you are now and we’re going to be good to you. Maybe you want to sell a 2019 Chanel flap bag. I don’t know why you would want to give it to us to sell it so quickly. But we love you, we’re only going to take 10 percent [commission].”

Fashionphile’s number-one-selling bags are commodities,” Davis said. “Louis Vuitton Speedy handbags fly off the shelves. As far as velocity for an entry-priced accessory, there’s velocity, they’re very popular. Every time there’s a new collaboration between Louis Vuitton and Supreme, or Chanel and Pharrell [Williams], they’re the hottest thing in minutes.”