The Department of Justice, along with 11 states, accuses the search giant of anticompetitive practices. This could be just the beginning.

Alphabet/Google's Sundar Pichai appearing before the House Judiciary Committee in 2018.

The U.S. Department of Justice and multiple states have filed suit against Google parent company Alphabet over antitrust allegations, in what could lead to a moment of reckoning for the tech industry.

The federal court docket, which surfaced Tuesday, didn’t itemize details of the case, but according to earlier media reports that day, Google is accused of engaging in anticompetitive tactics to preserve its search and advertising businesses and block competition.

Marketers know that Google ads, which are largely driven by search, are a massive online marketing pipeline rivaled only by Facebook and Amazon. The coronavirus pandemic has roiled the advertising business this year, but according to 2019 figures from eMarketer, the three collectively nabbed nearly 70 percent of all digital advertising dollars spent.

Out of the three, Amazon naturally took the top spot for e-commerce sales, while Facebook alone stood out as the go-to platform for social media ad spending. But when it came to brands’ digital and mobile ad spend, Google reigned. The numbers break down to Google’s 37.2 percent outpacing Facebook’s 22.1 percent and far exceeding Amazon’s 8.8 percent for digital ad spend. On mobile, Google clocks in with 33 percent, beating out Facebook’s 30.8 percent and dwarfing Amazon’s 5.2 percent.

If the lawsuit’s allegations pan out, then the search dominance that drives Google’s massive ad business is based on anticompetitive practices.

Public comments from DOJ officials center on Google’s large investments to maintain its position as the default search engine on Android devices. Google, which makes the Android platform, has paid billions to smartphone makers, carriers and browser developers, the officials reportedly said, functionally cementing distribution by preinstalling the search engine on handsets and prohibiting its removal.

Responding to a WWD request for comment, Google offered the following statement: “Today’s lawsuit by the Department of Justice is deeply flawed. People use Google because they choose to — not because they’re forced to or because they can’t find alternatives.” The comment echoes an early Tuesday morning one by the company.

Shortly after, a blog post followed, penned by Kent Walker, senior vice president of global affairs for Google. He wrote, “This lawsuit would do nothing to help consumers. To the contrary, it would artificially prop up lower-quality search alternatives, raise phone prices, and make it harder for people to get the search services they want to use.”

Walker characterized the case as a “dubious complaint” targeting Google’s efforts to make its search product widely available to the public. “Yes, like countless other businesses, we pay to promote our services,” he continued, “just like a cereal brand might pay a supermarket to stock its products at the end of a row or on a shelf at eye level.” He cited examples, like Bing and Yahoo paying to be highlighted in Apple’s Safari browser, and also noted that Microsoft’s Edge browser defaults to Bing.

But that argument probably won’t stop the case from going forward. The department is bringing the charges alongside 11 states: Arkansas, Florida, Georgia, Indiana, Kentucky, Louisiana, Mississippi, Missouri, Montana, South Carolina and Texas. Notably, all of the attorneys general for these states are Republican.

New York attorney general Letitia James and a bipartisan cooperative of attorneys general for Colorado, Iowa, Nebraska, North Carolina, Tennessee and Utah piled on, describing adjacent investigations in a separate statement: “Over the last year, both the U.S. DOJ and state attorneys general have conducted separate but parallel investigations into Google’s anticompetitive market behavior. We appreciate the strong bipartisan cooperation among the states and the good working relationship with the DOJ on these serious issues. This is a historic time for federal and state antitrust authorities, as we work to protect competition and innovation in our technology markets. We plan to conclude parts of our investigation of Google in the coming weeks. If we decide to file a complaint, we would file a motion to consolidate our case with the DOJs. We would then litigate the consolidated case cooperatively, much as we did in the Microsoft case.”

The suit amounts to an escalation of a long-understood threat to Silicon Valley’s business practices by governmental agencies, regulators and elected officials in the U.S. and abroad. Google and other tech giants have grabbed the attention of antitrust watchdogs in Europe and, most recently, Japan for various business practices, from its approach to search and advertising to acquisitions, primarily its current $2.1 billion bid to buy wearable-tech company Fitbit.

In the U.S., Google’s home turf, the company has been the subject of probes by the DOJ and Federal Trade Commission over anticompetitive concerns for years. Those worries crystallized last year when the DOJ revealed that federal investigations would zero in on some of the world’s top companies.

Google has continually denied that it operates as an illegal monopoly, citing antitrust probes going back six years when investigations into its display search business ended without charges.

Alphabet chief executive officer Sundar Pichai has testified before Congress multiple times covering everything from alleged anticompetitive practices to newer accusations of political bias in its products and platforms.

In July, he beamed into a Congressional hearing via remote video conference alongside leaders from Amazon, Apple and Facebook to answer inquiries about potential anticompetitive practices, alongside other matters, such as Facebook’s policies on misinformation and moderation, or even censorship. 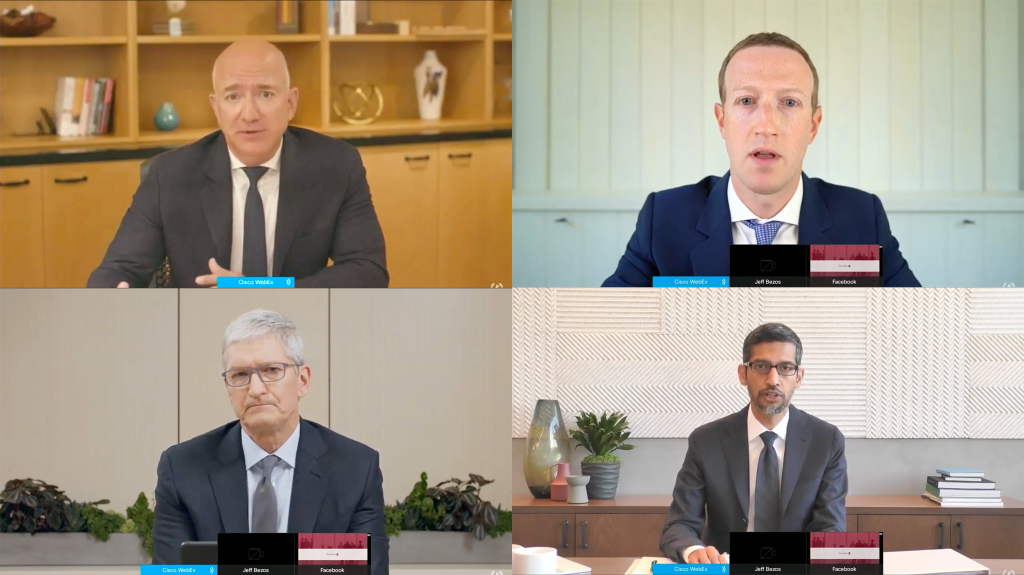 The questioning homed in on some of tech’s most controversial issues, which vary for each company. Members of the House Judiciary Committee grilled Amazon about how it deals with third-party sellers in its marketplace; Facebook for its platform policies on misinformation and moderation, or even censorship, along with whether it acquired Instagram and WhatsApp on an anticompetitive basis, and Apple on whether it unfairly stymies developers whose apps compete with its own. Representatives accused Google of taking content from other sources for its own benefit, among other issues.

The DOJ’s latest lawsuit has narrow scope by design, focusing on the tech company’s dominance in online search and possible harm to competitors, such as Bing. On its face, the case is both predictable and ironic. The last time a major tech company came under any significant fire for anti-monopoly practices, it was Microsoft, when the federal government brought a case against it in 1998. And, as Google pointed out, Microsoft’s Edge browser also defaults to its own search engine.

Still, the attention is not likely to go away or even stay contained to Google’s search business. Federal investigators are continuing to look into the company’s “search advertising,” and New York attorney general James indicated that the bipartisan coalition of attorneys general will continue focusing on Google for its search “and related industries.”

Additionally, James noted that her bipartisan, multi-state probe into Facebook for antitrust issues, announced in September, is ongoing.