After undergoing an overhaul last year, Google Fit is ready for its close-up…on iPhones.

The search giant revealed Wednesday that its health-tracking software has come to Apple’s App Store. But this isn’t a smartphone play; the subtext is all about wearables.

Google Fit may work in limited fashion on Android smartphones, but its fuller potential lies in Wear OS smartwatches — which includes recent releases from Kate Spade, Michael Kors and others — to track workouts, heart-rate and other metrics. The data tracked on the wrist funnels into the connected Android phone. Until recently, users could check out their data on the web, but Google shut down the Google Fit web site in March, urging people to access it on Android mobiles and Wear OS smartwatches.

It’s less straightforward for Wear OS users with iPhones. The data tracked in Apple Health isn’t freely available to outside apps, and partial data forms an incomplete picture of a person’s health or historical patterns.

Google’s workaround: Forget Apple Health, but hook into the third-party health and fitness apps that tie into it. Now those apps can send information to Google Fit, regardless of which watch the user sports.

According to Google’s blog post, “Apps you connect to Apple Health, such as Sleep Cycle, Nike Run Club and Headspace, sync with Google Fit to provide a holistic view of your health and show the Heart Points and Move Minutes you earn through other activities. And whether you own an Apple Watch or Wear OS by Google smartwatch, Google Fit keeps track of your workout sessions.” 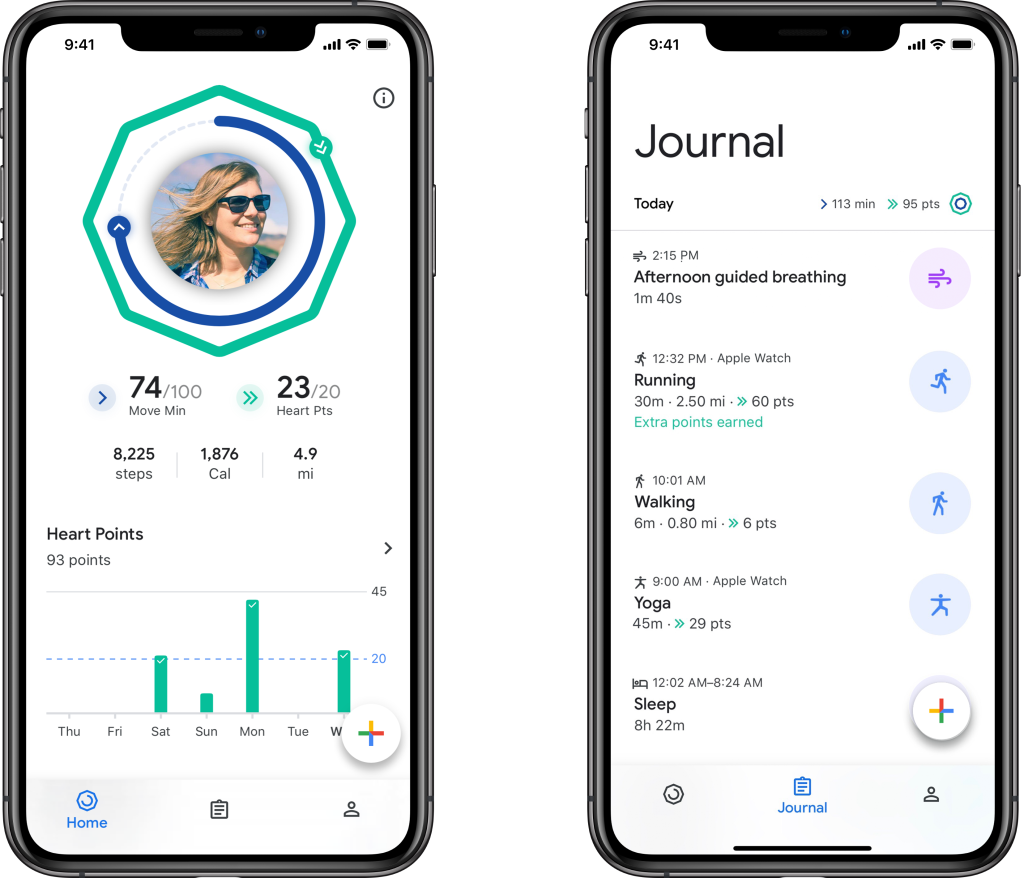 The approach hinges on the idea that giving more people access to Google Fit will grow its audience.

“With Google Fit on iOS, we are bringing the full experience to users with the ability to see all their activities — from workouts to meditation sessions,” Stacey Burr, vice president of product management for Wear OS and Google Fit, told WWD. “Regardless of phone and smartwatch owned, Apple or Android, or the apps used, everyone can track their activity level and get helpful lifestyle insights — and Google Fit on iOS is the necessary next step for us to broaden our reach.”

The move is yet another sign of Google’s increasing priority on health. In August, the company revamped Google Fit, which now features activity rings that showcase goals from the American Heart Association and the World Health Organization.

“Google Fit’s Move Minutes and Heart Points were built as simple and smart fitness goals based on AHA and WHO’s physical activity recommendations,” Burr said. “We’re heavily invested in enabling people to understand the science behind physical activity; both the amount and intensity needed to improve their heart health. We want to support people on their fitness journey to routinely get 150 minutes per week of elevated cardio activity.”

With the redesign, elevation tracking for workouts, as well as sleep-tracking with third-party apps, temporarily went missing. Then a March software update restored them, and now it’s looking to advance the cause of quantified health, by way of Google Fit.

The company’s not alone. Health has become the raison d’être for wrist gizmos at large, from Fitbit to Garmin — so much so that the smartwatch industry is staking its growth on it, according to IDC.

The research firm believes that wearables will increase 15 percent to 198.5 million units in 2019, and that smartwatches will grow its share of the whole market, from 44 percent last year to 47 percent by 2023.

By then, IDC figures that Apple’s WatchOS, the market leader, will run 28 percent of all smartwatches, thanks to the popularity of updates like cellular connectivity and deeper health features. The Cupertino, Calif., technology company added echocardiogram features to its latest smartwatch and boasts partnerships with the likes of the Mayo Clinic, Johnson & Johnson and Aetna.

That Google and Apple would go head to head in yet another rivalry is less surprising than the fact that Apple approved the Google Fit iOS app for its store — at least for now. Apple has a reputation for rejecting apps that compete with its own core offerings. And with health fueling the strategy for its increasingly important wearables category, during a time when its iPhone business is stalling, the stakes may be unquantifiable.