Looks from the Green Carpet are hitting the virtual plane — in more ways than one.

Fashion game app Drest is collaborating with the Green Carpet Fashion Awards on new challenges using looks from its archives.

Sustainability awards celebration Green Carpet Fashion Awards has gone high-tech, and not just with the high-gloss augmented reality, holograms and other special effects that marked Saturday’s program. Eco-Age, the group behind the awards, also partnered with app developer Drest on a collaboration that brought some of its archived looks to the fashion styling game.

Yeomans explained that she and Livia Firth, Eco-Age’s creative director and cofounder, are friends going back to the former’s previous life as a fashion editor, and the new partnership was birthed from conversations between the pair.

“We launched 15 sustainable gowns from the Green Carpet archives, into our gameplay,” she explained, adding that some 10 designers are represented in the group, including Versace, Stella McCartney, Armani, Prada and Vivienne Westwood.

“We found these amazing gowns — some worn by Livia herself, others by Thandie Newton, Amber Valletta, Cindy Crawford — and really interesting pictures of celebrities and supers [or supermodels],” she continued. “Players can come in, and their requirement to enter the challenge is to use a Green Carpet challenge piece. Some of our classic backgrounds in the game, some of our classic locations, we’ve been able to turn the red carpets green, we’ve turned the streets of New York green.” 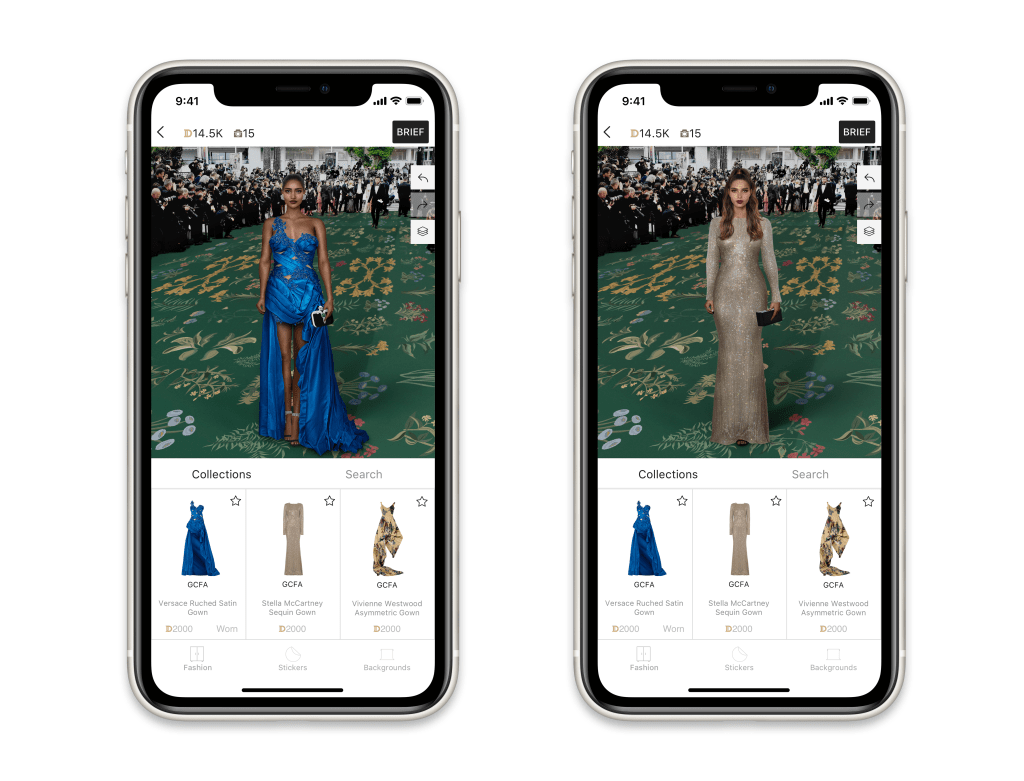 The 24-hour photoshoot challenges started with Thursday’s kick-off, called “Celebrate 10 years of The Green Carpet.” They continued on Friday with “A Decade of the Conscious A List,” and new challenges are being rolled out over the weekend.

The Saturday in-game event ran in conjunction with the actual Green Carpet Awards, now in its fourth year and transformed into a virtual presentation beamed virtually to Milan’s La Scala opera house.

The mission of the challenge, titled “Style The Green Carpet!” was as follows: “Your challenge is to create a green carpet-worthy look that will make a serious impact, virtually and IRL.” Players were instructed to choose from a curated set of Green Carpet gowns from the archive to create a look that showed “design flair with strict sustainable criteria.”

On Sunday, the app will introduce “Your Take On Conscious Glamour,” which challenges fashion fans to “create a look that would work beyond the red carpet,” according to the company. Players will be able to choose from Moschino to the Stella McCartney look worn by Cameron Diaz to the Met Gala, and users are encouraged to get creative and even break fashion rules — such as pairing gowns with sneakers or a jacket.

Naturally, the looks are female-oriented, as 82 percent of Drest’s user base are women. And as extra incentive to play and finish the challenges, they will be awarded a conscious piece of fashion as a gift from one of the labels.

Adding on to the green initiative, Drest also launched a new game mechanic this week called Renew Unworn. The update essentially revamps how the game scores look, which previously benefited outfits with all new or unworn items. Now users have a way to apply previously worn garments in the game without hurting their scores.

“I love that Drest disrupts the traditional fashion business model based on producing, selling and buying clothes. We now have an alternative to buying which is … playing,” said Eco-Age’s Firth. “A huge part of consuming is about playing with clothes once or twice — and then throwing them away — and now we don’t have to buy anymore, but just go on Drest and do games with different looks.”

More people have been doing just that, especially this year. Since COVID-19 grabbed the world’s attention, the game has seen a 50 percent increase month-over-month in organic installs, according to the company. On a global basis, it’s also tracked an increase in users sharing their creations from the app, with twice as many photoshoot challenges being posted across social media.

But, Firth pointed out, the game app may represent something more than just a bit of fun. Drest, which relies mostly but not exclusively on Farfetch for its assets and shopping transactions, also offers a chance for brands to diversify their business models, especially for those that must do it quickly in the current climate.

“Things are changing so fast and Drest is right here at the right moment,” she added.