Ströer SE started with outdoor advertising but has evolved its digital business in recent years.

Beginning next month, a new German company hopes to provide some European competition for U.S. giants like Amazon, Facebook and Google. The merged company — made up of data specialist subsidiaries of Otto Group and advertising company Ströer — will be named Otto Ströer Data Solutions, or OSDS for short, and will offer brands targeted access to a huge portion of the German online market.

This is because, with revenue of around 13.4 billion euros in 2018, Otto Group is one of the largest e-commerce companies in the world. It has a variety of subsidiaries, many of them fashion-related, everything from upmarket retailer Manufactum to inexpensive fashion chain BonPrix.

Meanwhile, Ströer SE started with outdoor advertising, but has significantly expanded its digital offerings over the past few years. In 2018, the stock exchange-listed firm generated 1.6 billion euros in revenue and also runs some of Germany’s biggest web sites, including the German Telekom-related news and entertainment site T-Online with around 29 million unique users a month, several Bauer media properties including Cosmopolitan and Madame, as well as Men’s Health, Disney.de and Germany’s most popular sports news portal, Kicker.de.

All this means that the two companies have a large amount of detailed consumer data at their fingertips. “We simply have the largest pool of data in Germany,” boasted Otto Group Media spokeswoman Swetlana Ernst. And this is how the company plans to take on the likes of Amazon, Google and Facebook — at least, in their home territory.

“We are basing our data pool on more than 30 million pieces of CRM data,” Tobias Emmer, managing director of the new business, formerly with the Ströer side, told WWD. “That is more than Facebook has here. And our predicted reach will be more than 50 million, which means we will cover about 90 percent of Germany. That is what separates us from Facebook and Amazon — they have far lower numbers than us” in Germany.

Emmer and Ernst also claim that the data that comes from actual sales and interactions on the many web sites that OSDS will have access to will be of better quality. When they browse these shopping and information sites, users tend not to invent fake profiles or change their age and address. Nor can a real customer be confused with a click-gathering bot. 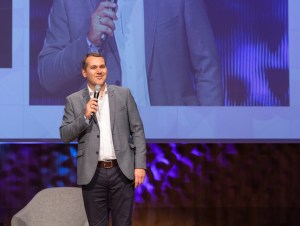 Additionally, 60 percent of shopping searches now happen on platforms like Amazon, rather than on search engines like Google, Ernst noted. This evolution of online behavior is also something that will help OSDS gather more information on consumer behavior, possibly beating the search engines to it.

Emmer explained how the company will sell user data to agency clients. “So if you are Tommy Hilfiger and you’re selling your clothes on the Otto.de web site, for example, then your customers leave a data footprint when they buy there.” This customer data is matched with Hilfiger customers’ other online activities on all of the other web sites and OSDS will be able to build a profile of the Hilfiger customer. For example, they might like fine wines or football or holidays in Spain.

“We’ll then be able to predict which of all of the other users of the Ströer and Otto web sites might also be the next potential Tommy Hilfiger customers, even if some of them have never been near the Otto.de site,” Emmer continued. “And as a brand, you use this information to better target your advertising campaigns.”

This kind of data harvesting, matching and profiling is similar to what Google, Amazon and Facebook already do. Companies like H&M and Zalando are also working in this area. But in this case, once an OSDS client has bought the data, they are free to do what they like with it — within the limits of their contract with OSDS and tight German privacy laws, of course.

They can also use whichever demand-side platform they like or their own agency’s technology, Emmer said, pointing out that this wasn’t possible with Amazon and Google.

All gathered data will also be anonymized, Emmer stressed. He doesn’t think users of the various web sites will mind their anonymous information being sold to third parties. “I think if you are browsing online, you are well aware that your browsing behavior is part of how online advertising is delivered to you,” he argued. “And you always have the choice of opting out.”

Twelve staff members from both companies will start work in an office in Hamburg on July 1, and they’ll have big ambitions. There’s talk of expansion into other German-speaking territories, Switzerland and Austria, and Emmer has high hopes for eight-figure revenue, even during the first year. A previous, smaller test project that saw the two companies cooperate managed to generate seven figures in revenue and got excellent feedback from clients, Emmer added.

Emmer is well aware that these plans sound grand, but that doesn’t lessen his ambitions. “We are very confident,” Emmer told WWD. “We have a comparable product and we’re offering a much wider reach than any other competitor in the German market.”