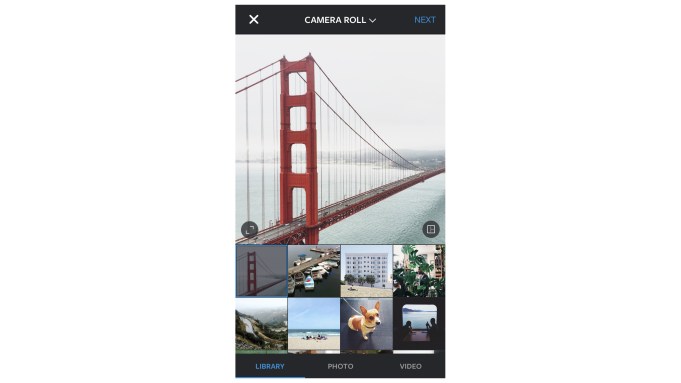 SAN FRANCISCO — In a move that will be a relief to all but the most nostalgic of holdouts, Instagram today reveals that it will now allow users to share portrait- and landscape-shaped images and videos, in addition to its signature square format.

Until now, the five-year-old photo-sharing app, which was bought by Facebook in 2012, has been distinct in that it confines all posts to a square, reminiscent of Polaroid and Instamatic images.

Answering a question on Quora in 2011, cofounder Kevin Systrom said the signature square format was chosen to be different and to stand out. “Square photos displayed really well in a feed format and frankly we just liked the aspect ratio better,” he said. The change will give more freedom to Instagram’s 300 million users, many of whom had been using outside services to post horizontal or landscape images (leaving a white space on the rest of the square). According to Instagram, nearly one in five photos or videos people post aren’t in the square format.

With this change, users can tap the format icon to adjust the orientation to portrait or landscape instead of square when they select a photo or video. Once a photo is shared, the full-sized version will appear to followers in the feed, but to keep the clean feel of each user’s profile grid, posts will appear there as a center-cropped square, in keeping with the original format.

In unveiling the news, Instagram said that the square format has been and always will be part of who they are: “That said, the visual story you’re trying to tell should always come first, and we want to make it simple and fun for you to share moments just the way you want to,” the company said.

This update is especially suited for sharing video on Instagram, in that it allows for a more “cinematic,” widescreen format. With this update, all filters will now also work on all types of posts, and users will be able to adjust the intensity of filters on videos.

Instagram started allowing a few major brands to post ads in November 2013. Three of its initial 10 advertisers were Michael Kors, Burberry and Macy’s. A year ago, Systrom told WWD that fashion and retail brands comprised about a third of Instagram’s advertising revenue.

In June, Instagram said that later this year, it would open up advertising to all brands. In two years, it is estimated that Instagram will take in $2.81 billion from mobile advertising revenues, according to eMarketer. As reported in WWD, Instagram is also expected to make up more than 10 percent of Facebook’s global ad revenues by 2017.

A favorite of the style set and other visual-based industries, Systrom has told WWD that “fashion is probably the most important vertical we get right.”  The brand looks to be continuing to grow its relationship with fashion brands. In July, it welcomed former Lucky magazine editor Eva Chen into its ranks to develop fashion partnerships. The timing of the update also fits in with the upcoming New York Fashion Week.