Of more than 120 trunk shows for that season, Moda reported its findings in its runway report across product categories and through website search data.

Today Moda is unlocking consumer trend data from its designer trunk shows in the release of its “Moda Runway Report.”

The multibrand luxury retailer began first as an e-commerce platform with the mission of granting luxury shoppers first access to designer collections straight from the runway, but since opened boutique locations to service its luxury clients. The runway report will glean data from Moda’s luxury fashion consumer, aiming to forecast “next season’s fashion trends, shopping behaviors, and geo patterns,” as Ganesh Srivats, chief executive officer of Moda Operandi, said in a statement.

At Moda Operandi, inventory buying is segmented into two core areas: “boutique” orders (traditional assortments which may be replenished based off of trunk show success) and “trunk show” orders (whereby purchase orders are written after the close of a given trunk show, stocking inventory according to consumer demand, or “pre-orders”).

Of the more than 120 trunk shows for that season, Moda reported its findings in its first runway report across product categories and through web site search data. Macro trend searches included those terms on the rise: “tie dye,” “headbands,” “trench,” “feathers” and “pearl”; and those on the decline: “velvet,” “sequins,” “leopard” and “corsets.” 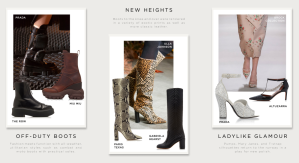 Inventory is guided by consumer wants shopped from designer runways, nodding toward reduced risk and increasingly sustainable decision-making. For the fall 2019 season, “We found styles that sold meaningfully in trunk show sold 10-times more quantity in our boutique months later than those that didn’t,” Srivats said.

By the categories, dress predictions follow “Long & Lean” minimal styles, in likeness of The Row and Proenza Schouler, as well as “Animal Instinct,” echoing insights from a previous trend report from Edited, as previously reported in WWD, which highlight both zebra and leopard print, despite declining search data. The report also noted an interest in a shifting preference for “glamour” in accessories, citing adornment in handbags appearing in chainmail, faux fur and embellishments for both footwear and headwear.

London represented the most runway savvy global shopper at Moda, while New York City is the top spending city in the U.S. Style preferences varied by state, and even neighborhoods of Manhattan shifted taste.

Peak shopping time, according to the report is Monday afternoons and Sunday mornings. As for influencing celebrities, a crowning moment included Meghan Markle in Victoria Beckham, driving 13,000 percent spike in click-through rate after 48 hours, revealing interest and possible sales.

The trunk show data may signal a “high degree of predictive power” revealing what new trends may unfold. One example from many season’s past is the Cult Gaia ark handbag, which appeared in Moda Operandi’s 2017 trunk show called “Everything but the Suit.” The trunk show featured an edit of the latest resort accessories, launching on site in 2016. Today, the bamboo ark bag, and imitations, continue sweeping the summery assortments of competitors. 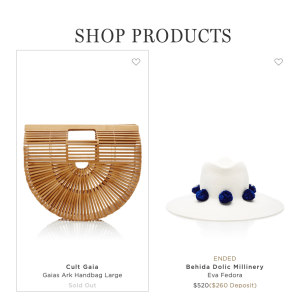 As for how Moda Operandi will continue leveraging its predictive data, Srivats told WWD: “We’re continuously working to develop more layers of sophisticated data systems to help us improve even further to better match inventory to demand.” Less is more with inventory, as long as the customer chooses it.