The new clamshell device debuts with a fashion short film starring Julia Garner from "Ozark." WWD speaks with the actress, stylist and tech-maker.

Motorola wants to make flip phones the big “It” thing again, and with its latest attempt, the tech company is turning to fashion to do it.

On Wednesday the company introduced its latest Razr 5G, the follow-up to its rebooted smart flip phone, alongside a new fashion short film. The video was directed by Luke Gilford — whose credits include photo campaigns for Valentino, Apple and Mercedes-Benz and music videos for Kesha, Christina Aguilera and Troye Sivan — and features “Ozark” actress Julia Garner and model Aweng Ade-Chuol. The video follows Garner and her crew, who take a joy ride in racy cars and racier outfits, accentuated by Moto’s new Razr.

“There’s something so cool about an iconic Razr phone, how thin it is and how small it is and how you can just flip it,” Garner told WWD. “It’s just so fun to talk on the phone and flip, and it just adds that dramatic effect.”

That may be one reason why she took on her first tech-focused fashion project, even during a pandemic.

Shooting in the coronavirus era is no easy feat, but the production took all necessary health safety precautions. But that’s not what Garner remembers best. It was the eye-catching red coat that she donned for the scene in the desert, her favorite look from the film. 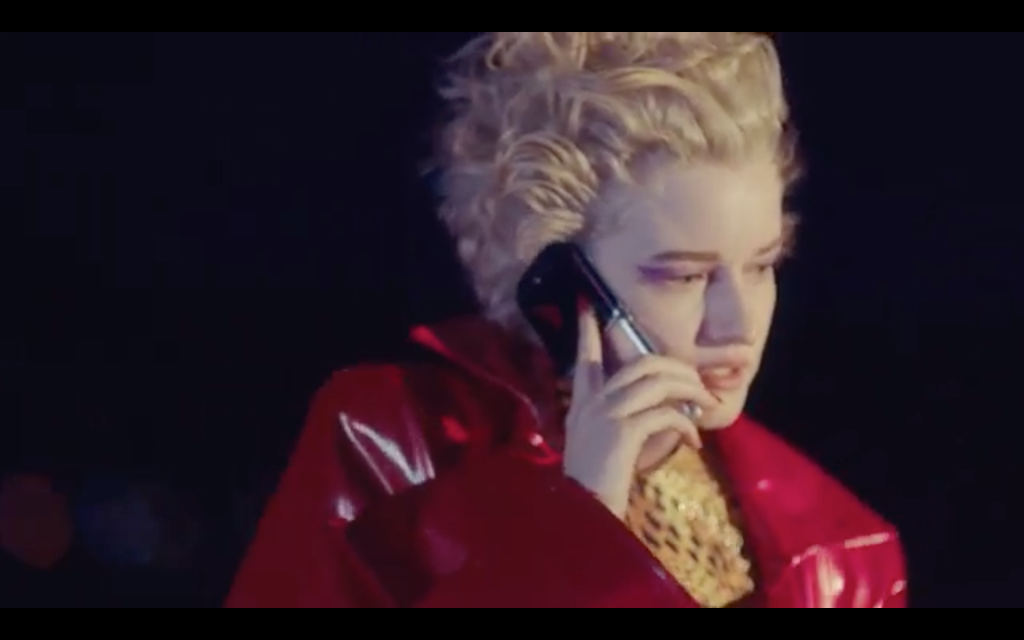 According to stylist Kyle Luu, that was a red patent leather trench by Gareth Pugh. “I thought it looked fabulous,” she explained to WWD. “It’s sleek and it’s shiny and it has this really interesting texture to it that I thought complemented the Razr phone, which is this sleek, sharp and very like precise [aesthetic]. Like the lines on the phone and the lines on the jacket for me felt right.” For Ade-Chuol, Luu leaned on designer Christopher Kane.

The stylist was going for a retro feel, inspired partly by the phone, the director and his own experiences. “The Razr phone is such a fashion phone, I mean it came out in 2004. And as much as it was a mobile device, it was also such an accessory, too,” she explained. “And I wanted to make sure that we were able to make that magic happen again this time around with the phone. Because it’s such an amazing device.

“[Overall,] the looks were slightly inspired by some of Luke’s work, more the ones that are loosely Eighties-inspired and very glam,” Luu continued. “And we do a party in New York City called Club Glam, a space called China Chalet. So a lot of the looks were inspired by the people who show up to our parties in our spaces. So it was a combination of both.” 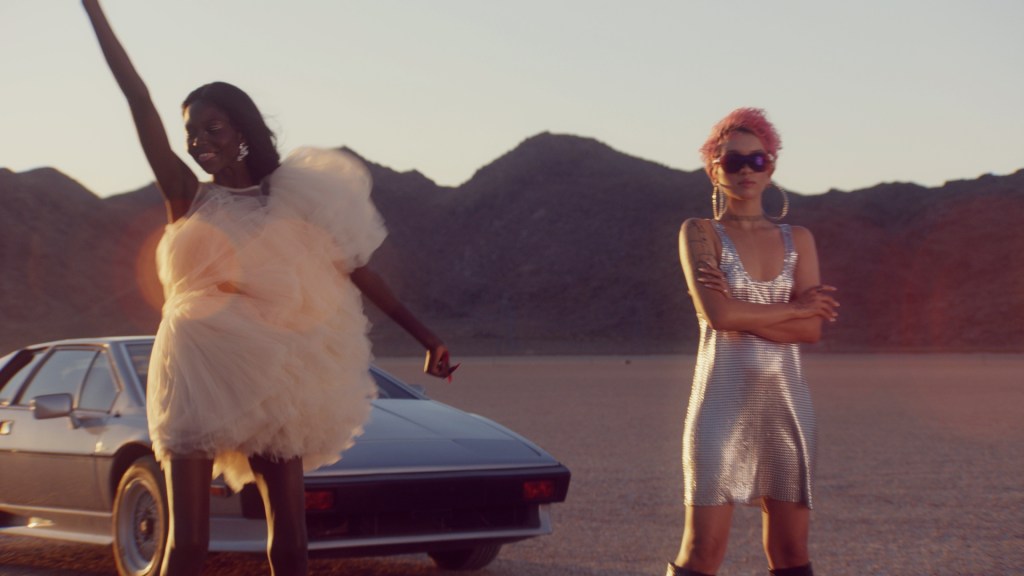 The style of the film leaned into retro aesthetic, thanks to stylist Kyle Luu.  Courtesy image

This vision meshes with the Razr’s vibe, as a device that’s at once a throwback to the original flip phone and a design-forward move that aims to revamp the big smartphone experience in a smaller package.

“[The first] Razr has been really attached to culture and the fashion world,” said Maria Jose Martin, Motorola’s North America marketing lead, of the earlier clamshell feature phone. The original device enjoyed a pre-iPhone wave of popularity due to its super sleek design, not to mention that satisfying “thwack” when snapping the phone closed.

“It was a big differentiator, moving the status quo in the technology industry with design first,” she said. “With this new Razr, this is what we have been trying to convey again, bringing a fashion statement and really building the Razr on its DNA of being more than just a phone, but a fashion accessory.”

Many tech companies merely rely on hardware specifications and commercials, hoping those are enough to entice the masses. Moto went a storytelling route to humanize the product experience. The goal was to “capture the emotions and drama that fashion can make you feel and also really making [the device] part of a person’s life,” Martin explained.

The Motorola executive pointed out the “pocketability” of the phone, that it can fit anywhere, even in a tall boot, as seen on Garner in the film. 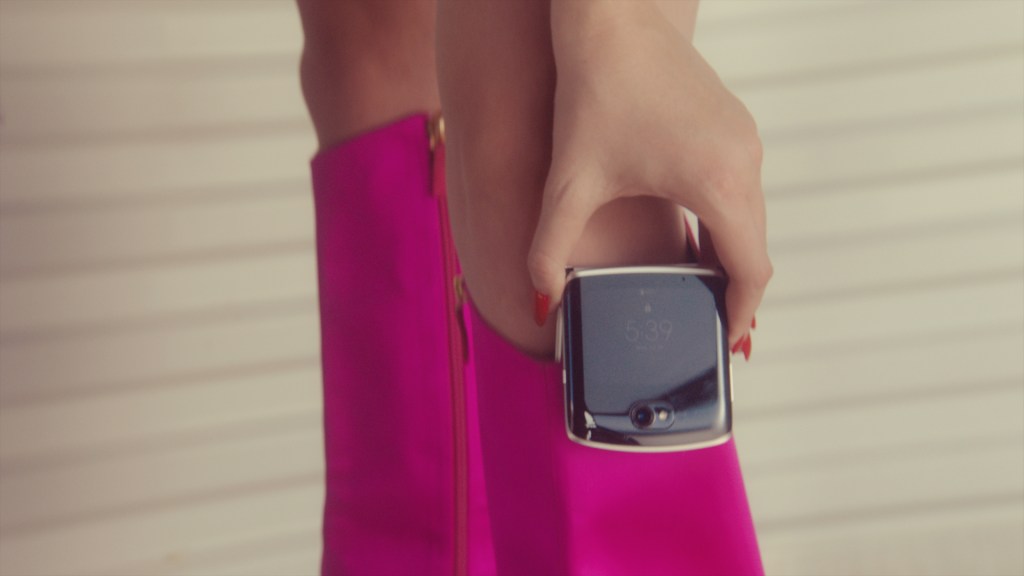 The boot scene was intended to showcase the tiny footprint of the device.  Courtesy image

The design of this model’s predecessor, which launched last February, gained a lot of attention and traction, according to Martin — enough to prompt the company to expand its reach, adding 10 markets to its original spate of 26.

“Around 50 percent of the Razr buyers are from the competition, and they were really wanting to look for this and really wanting something different,” she said. “We’re seeing a great trend, and that’s why we brought the second generation.”

The company also listened to critiques of the previous version, which noted a stiff hinge that made creaking sounds, mediocre battery life and a fat lower chin. There was also demand for a better camera out of the box. Moto somehow eliminated the noise, enlarged the battery capacity a bit — going from 2510 mAh to 2800 mAh — trimmed down the chin and made improvements to the unit’s picture-taking capabilities.

Notably, the new Razr retained the previous model’s beauty filter, which smooths out skin and automatically retouches pics — a feature that’s proven popular in Asia — and an optical image stabilizer and better quality when shooting in low light. It also boasts “pro” features that let users control ISO, white balance and other details.

While it still has no telephoto or wide-angle modes, as reviewers pointed out with the first version, so far, this model seems better suited to selfie — and social media-crazed users than the earlier Razr. 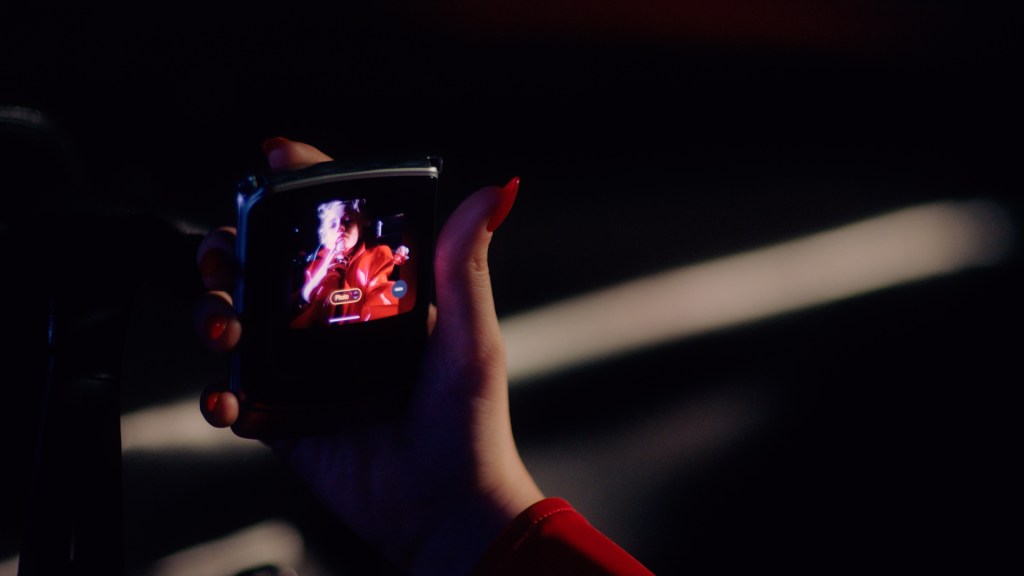 The phone’s shape and design allow the best camera to be the selfie camera.  Courtesy image

But the marquee feature in this model is the addition of next-generation 5G connectivity, as well as updated processors, more storage up to 256GB and more memory. In other words, it works faster now.

Another focus area is the exterior display, which comes in use when the clamshell is closed. Unlike most smartphones now, it can already let users take selfies with the best camera on the device.

Now the company is expanding what people can do from the outside screen, even allowing any app to run on that 2.7-inch display — though not all are suitable for such a tiny space. If that improves over time, users would be able to do much more without opening the phone, which could get old for power users.

In WWD’s usage, there was a beneficial side effect of this scenario: The mediocre battery life managed to stretch for more than a day, as it takes less energy to power a small screen than a large, 6.2-inch display, especially when it’s pressed into service constantly. 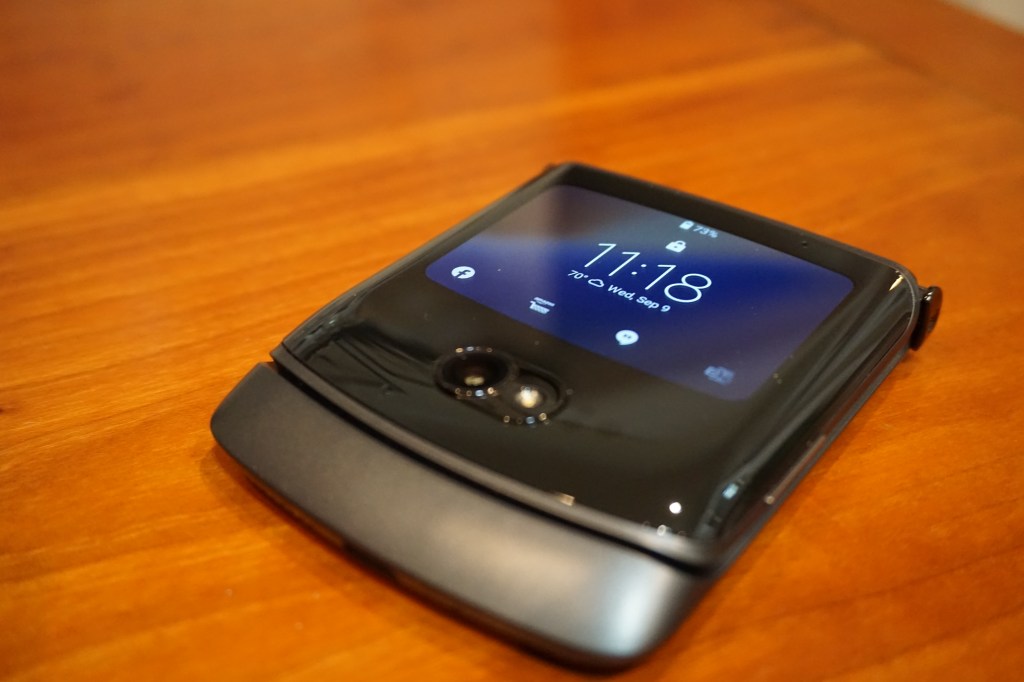 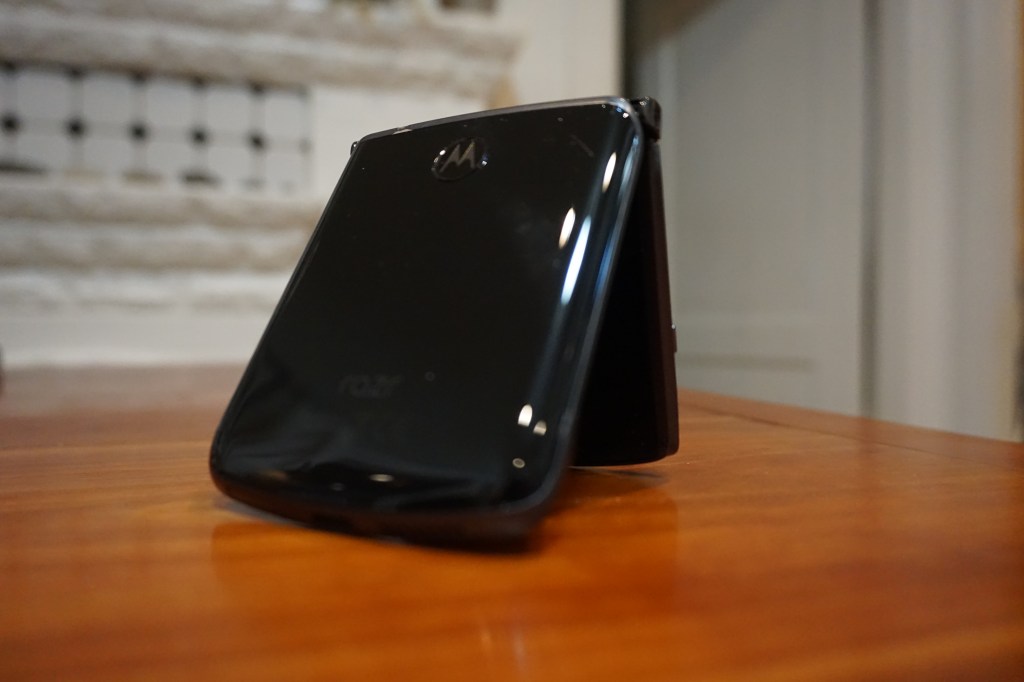 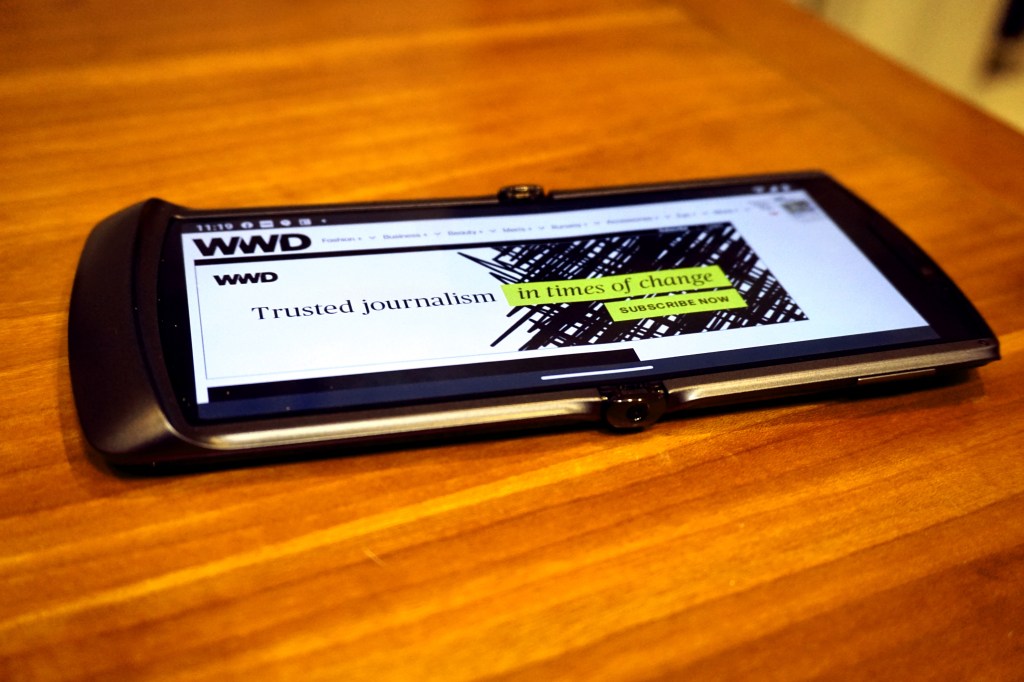 The device opens into 6.2 inches of screen real estate, courtesy of a plastic screen and hinge mechanism.  Adriana Lee

This Razr is a little lighter, going from 205 grams down to 192 grams, though it’s now a bit shorter, a hair wider and a little thicker in depth than the predecessor. But it’s still very pocketable and fits well inside a small bag or jeans.

And for that, the new Razr and its fashion chops have won over another fan in Garner.

“Everything in terms of technology is so big right now. And I feel like, with fashion, everything’s turning small — like small, very tiny, tiny purses, from like the late Nineties to early 2000s, those are really coming back,” said Garner. “And you can’t fit a huge phone.”

That’s music to Martin’s ears. “The vision for this company is really what we call ‘minimal makes maximal,’ and it’s how simple things — how sometimes less is more — is so relevant here,” she said.

Now the company braces to see if consumers will flock to this $1,400 phone. The cost is a little less than the $1,500 price tag of the previous Razr, but version 2 is debuting during one of the worst economic downturns in recent memory, thanks to COVID-19. And while the specs may not be the point of this phone, it’s still a luxury item that doesn’t come with the most sophisticated, top-of-the-line tech.

It’s not clear if that matters to the crowd Moto is going after. But time, and consumer tastes, will tell.