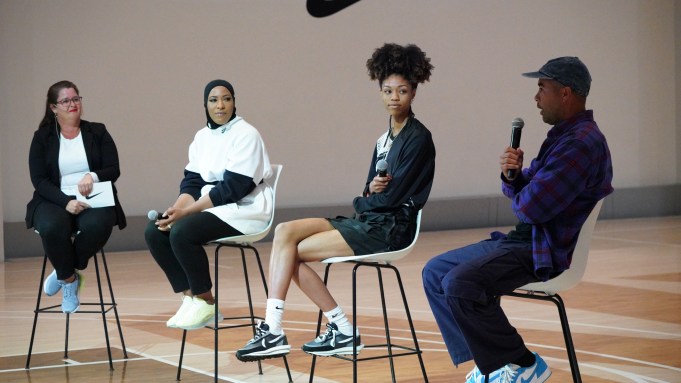 Sport doesn’t have to be extreme to experience the far-reaching effects of a climate crisis.

That’s the message at Nike NYHQ — where everyone is an athlete — and everyone is a stakeholder in the climate conversation. Nike invited three of its professional athletes and its chief sustainability officer, Noel Kinder, to discuss the brand’s move toward zero carbon emissions and zero waste across its global supply chains.

The panel included decorated 21-year-old track and field athlete, Vashti Cunningham; pro skateboarder Eric Koston, and elite fencer, author and the first Muslim-American woman to wear a hijab while competing for the U.S. in the Olympics, Ibtihaj Muhammad.

Before the panel, guests viewed Nike’s “Move to Zero” activations illustrated with data from The Climate Lab, showing how sport and athlete performance is hindered by climate change — think slower racing times, flooded playing fields, melting of both water bottles and snow-capped mountains.

“It’s gotten so much worse since I’ve grown up,” Cunningham said during the panel. Too, Muhammad is focused on being an “agent of change,” authoring a children’s book to promote greater representation and founding a modest fashion line.

Although right now is a likely time for brands to push out messaging on sustainability (as UN climate week kicks off), Nike demonstrated it has been doing it for quite a while.

Programs such as Reuse-a-Shoe and Nike Grind have been proponents of diverting and converting waste for 25 years in the case of the former, which is the oldest takeback program in the industry.

“It’s frankly how we founded the company,”= Kinder said in an interview with WWD. “It’s important to be committed to this in a way that is measurable, quantitative and actually drives impact, and hold ourselves accountable through our public targets,” he reiterated.

Kinder shared how 75 percent of Nike products have some recycled content in them, but “we’re just now starting to talk about that. It’s time.”

In its “Move to Zero,” Nike aims to reduce its carbon emissions across its global supply chain by 30 percent by 2030.

Throughout its logistics network, Nike has a team dedicated to exploring greener fuel methods and partners with groups such as the Clean Cargo Working Group to reduce the carbon footprint in its shipping and transportation. Nike also recently opened a 1.5 million-square-foot distribution center in Belgium that is completely fossil-fuel free.

On the pacts and pledges proliferating the industry; “It’s less about the commitment per se, I mean those are really important, but it’s the fact that you got a group of industry peers, who are equally committed, to go on that journey together and solve these problems together,” Kinder said.

“It demonstrates how if you’re dedicated to it and you integrate it in the way you produce product, you can reach scale — and scale has an impact,” he said.