On Staff: Ahrendts Was Never an Apple Lifer

And that’s not a bad thing.

The details of Angela Ahrendts’ upcoming departure from Apple are shrouded in mystery. But there’s one thing that’s certain: The soon-to-be former senior vice president of retail has kicked off a real-life version of “Where’s Waldo?”

Analysts, journalists and other Apple watchers are surveying the business landscape, looking for clues of where she’ll turn up next. But instead of asking where she’s going, the better question may be what she’ll leave behind come later this month, when she officially bows out.

The short answer: A reputation for being a tough, decisive executive. Also, a track record that is, frankly, polarizing.

After rejuvenating Burberry’s business as its chief executive officer — although many of her initiatives, particularly in the digital realm, were subsequently unwound by her successors when the brand begin to stumble again — Ahrendts stepped away from fashion and into consumer technology as Apple’s head of retail five years ago.

Since then, she’s established a reputation for being a no-nonsense leader — tricky territory for a female executive in a male-dominated industry like tech. But at Apple, Ahrendts’ confidence was an asset.

“Everybody else in management at Apple is kind of an ‘Apple lifer.’ Angela is her own person and she’s very resolved — fine with who she is and very comfortable with that,” said a source familiar with “Apple Retail” and its working relationships. “I don’t think she really, totally bought into the cult. She’s already had so much success at another company. A lot of [the executives] have amazing credentials, too, but a lot of them made themselves at Apple.”

That confidence also casts her as a decisive executive, one with a vision and the chops to execute on it, say insiders.

They described her team as a close-knit group of top performers that operated with high creativity and efficiency. In an environment like that, burnout might have been expected. But instead, there was little, if any, turnover — a detail that one could view as a testament to Ahrendts’ leadership.

Not that she’s the type of boss who remembers everyone’s names or asks how the family dog is doing. The Apple executive hierarchy doesn’t allow for an open door policy either. But she had her own way of keeping people motivated.

That was no small task. Apart from her team at Apple’s corporate offices, she was also responsible for 70,000 retail staff across 506 stores worldwide. To keep them in the loop on key information, Ahrendts ensured that they were equipped with internal apps that briefed them on important updates or connected them in a corporate social network, so they could learn from each other.

The associates and “geniuses” showed an impressive amount of loyalty in return: In a recent interview, Ahrendts pegged Apple store retention rates at nearly 90 percent, making the operation retail’s version of a unicorn employer.

It all sounds idyllic, at least internally. But the view from the outside looks a little different.

Part of the reason is timing. The company’s sudden announcement of Ahrendts’ departure came shortly after it disclosed a surprising downturn in iPhone sales in the holiday quarter. Pundits immediately jumped to conclusions, speculating about whether Apple unceremoniously dumped its retail executives because she couldn’t sell enough iPhones.

Other critics pointed out that Ahrendts received $170 million in compensation during her tenure, and wondered what, if anything, she accomplished for the money.

According Apple analyst Neil Cybart, it was quite a lot actually. The former fashion executive united Apple’s online and physical stores, expanded its retail footprint by nearly 100 physical locations worldwide and redesigned the brick-and-mortar layouts to accommodate more traffic.

Most importantly, she also revamped the overarching premise of Apple stores.

“Apple’s trying to move the store from being a service center — because there were so many people with Apple products — to something else, something beyond just a service location or a pit stop,” explained Cybart. “This brings us to things like ‘Today at Apple’ sessions. Really, it’s trying to make the store a way of experiencing the Apple brand, and that’s been Apple’s goal with retail for the past few years.”

Of course, that doesn’t mean that everyone was sold on this concept. Or even gets it.

The confusion is understandable. Previous in-store sessions offered nuts-and-bolts lessons on how to use Apple hardware and software. And the Today at Apple initiative still offers classes, as well as workshops and live music events. The idea now is to create a gathering place for inspiration or community.

Whether that qualifies as a nuanced difference or just a rebranding of some old curricula is in the eye of the beholder. Either way, it reveals how the company and its retail chief wanted people to think about Apple stores — as a unique experience that enriches their lives.

The concept is rather Jobsian, a reference to Apple cofounder Steve Jobs. He never pushed iPhones. He pushed inspiration, creativity, elegance and design. He promoted a lifestyle. He used words like “magical” and spoke in terms of experience.

Eventually, Jobs applied the same approach to the first Apple store 18 years ago. He wanted something more than just shelves full of devices. That was partially due to necessity: Back then, before the iPod launched, Apple didn’t have enough product to fully stock a store. So he and then-retail chief Ron Johnson decided to fill it with customer experience instead.

In a sense, Today at Apple is spiritual kin to those early inclinations.

The sum total of Ahrendts’ work can be described in retail terms. She brought multichannel retail to Apple and furthered its experiential retail efforts.

But those successes make her departure all the more mysterious.

One moment, she’s a well-regarded leader, even a potential successor to Apple ceo Tim Cook. The next, she is headed out the door. And Apple, which is known for its secrecy, has stayed true to form by not offering any further details.

The dearth of information has the rumor mill rushing to fill the void. Ahrendts popped up at a Ralph Lauren fashion show in February, and rumors emerged that she may be returning to fashion. One musing has her hitting up Ralph Lauren for a job — despite the fact that she already holds a seat on the brand’s board. (The design house also debunked the notion.) Another rumor has her trying to boomerang back to Burberry. Although, in both cases and many more, there is almost no fashion company that could come close to Ahrendts’ level of compensation at Apple.

Besides, the truth is far less dramatic. Ahrendts told WWD that she intends to take the summer off to focus on travel and family. Job hunting’s apparently not even on her radar yet.

As for whether she was blamed for the 15 percent drop in iPhone sales, the scenario would overlook the other numerous factors that went into Apple’s mobile device strategy — including wallet-busting price points and lackluster updates that, some consumers feel, aren’t worth the cost.

People who know and have worked alongside Ahrendts have a different theory.

One source summed it up this way: “When you’ve got over 500 stores and you have all these new programs that she created, at some point, it becomes more about retail operations, merchandising…really just selling units of iPhones, especially in other markets, like Asia.

“That may be less interesting for someone like Angela,” the person added. “Think about how creative she is. Is that the job you’d want?”

It’s as good a theory as any other. And it actually lines up with Apple’s upcoming priorities.

In a recent note to investors, Wedbush Securities managing director Daniel Ives said that, while he hasn’t been impressed with Apple Retail, he does believe it’s about to become crucial. The company will soon need to drive retail demand in places like China.

“In a nutshell, while the timing of this departure is a head-scratcher,” he wrote, “change could be a good thing for Apple as the last year has been nothing to write home about.”

The change will come in the form of Ahrendts’ successor, Deirdre O’Brien. 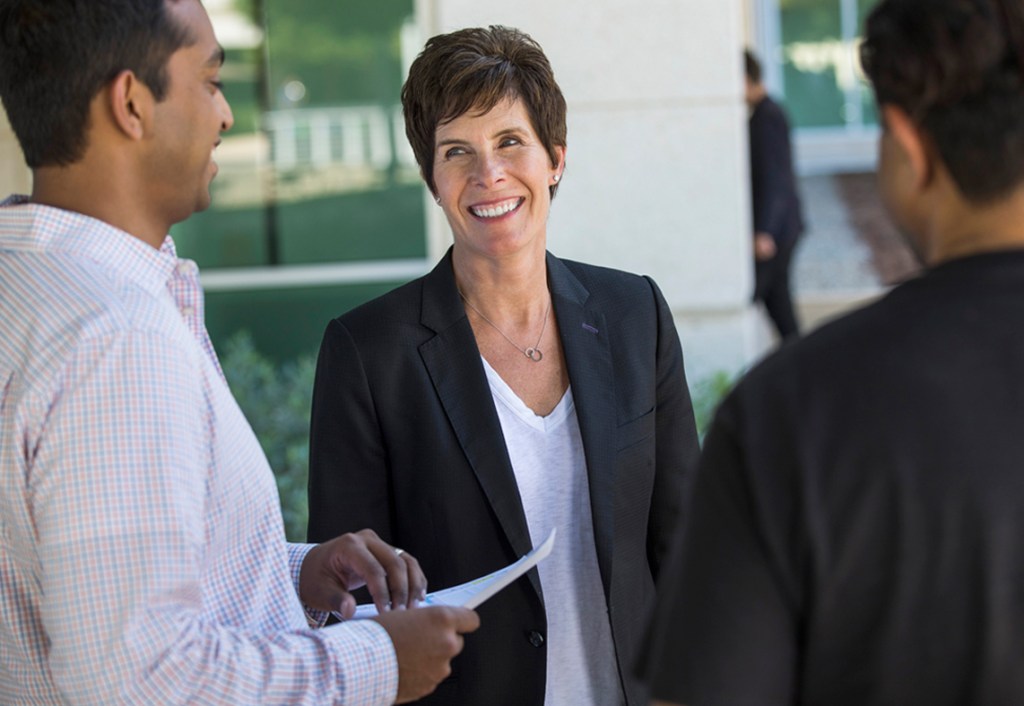 According to Apple.com, the human resources executive in charge of “people” has already added “retail” to her title.

O’Brien may seem like an odd choice, but it makes perfect sense to Cybart.

“I think that’s a very key element of this whole thing. She has very deep experience with product,” Cybart said. “She wasn’t just an HR executive now in charge of retail. She had prior experience working with the retail apparatus, helping to launch products, helping to figure out demand for products.”

O’Brien’s background includes a degree in Operations Management, and before becoming Apple’s “people” person, she held an executive-level operations role at the company.

In fact, out of the three decades she’s worked there, “Deirdre has played a key role in every Apple hardware product launch over the past 20 years,” according to a 2017 Apple press release.

The icing on the cake? She also worked with Ron Johnson on the very first Apple stores.

In other words, O’Brien is one of those “Apple lifers” who has the right mix of skills at the right time for Apple Retail.

She’ll have to smooth out some remaining rough edges at Apple, though.

Aside from her predecessor’s successes, there’s still room for improvement. Many Apple stores still experience intense customer traffic and pre-booking Genius appointments can be an exercise in patience. Attending to such details will be important. So will finding ways to support Apple’s bustling side businesses and services. And keeping Apple employees and other “lifers” happy.

O’Brien will be busy indeed.

“You’re probably going to have some larger launches coming in the future over the next couple of years,” Cybart added. “She’s seen it from different angles. I think having her in that position could be interesting.

“Because,” he said, “in a way, she would have a little bit better experience at that than even Angela did.”