The fear of the unknown is a basic human feeling, shared by most people. The fear mechanism is one of the most developed devices throughout our evolution. It’s there to protect us from evildoers, from predators, from everything that strays from the ordinary, the routine, the repetitive.

When asked about artificial intelligence’s place in our lives, it usually activates the same sensors in people, eliciting the same response. It’s fear. It’s the robots we read about in books, that we see in films. They start out helpful and obliging, but eventually turn against mankind — or, to be less dramatic; they will take our jobs and lead to a large-scale unemployment crisis. We think about AI as “The Terminator” — that 1984 science fiction film starring Arnold Schwarzenegger. Robots in the future are self-aware, they discard human authority and, furthermore, decide that the human race must be destroyed. This popular movie turned the prevalent visual representation of AI risk into the terminator robot.

I look at AI somewhat differently. It’s important to remember with AI that dramatic changes aren’t around the corner. It’s a matter of decades. Despite the notion that AI is on the fast track to rapid progression, this is not true. The pace of development is much slower and more premeditated.

And if we are talking about the labor market — the “robots stealing our jobs” narrative — then I want to remind you that these job-stealing-robots are already here. And they allow us to evolve. We no longer need chimney sweeps or milkmen; AI and its derivatives have and will open more job opportunities, while other professions will vanish altogether, and that will make us all more professional. But we’re not talking about a large-scale unemployment crisis. And furthermore, when I talk and imagine AI, it doesn’t come with the face and torso of Arnold Schwarzenegger, more of Robert Downey Jr. 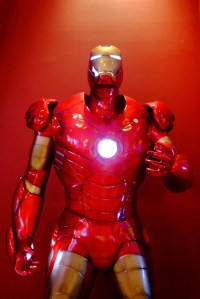 In the iconic 2008 film “Iron Man,” Downey Jr. plays Tony Stark, an industrialist and master engineer who builds a powered exoskeleton after a life-threatening incident and becomes a technologically advanced superhero. This is exactly why AI intrigues me — it’s a massive tool to help us reach and refine our super strength. It can help a super surgeon, a super scientist or even a super marketer do their job better than they ever imagined. The machine is great, its capabilities are awesome, but it has to build on the shoulders of humans and together they’ll prevail.

In one of his famous interviews, Steve Jobs described research by Scientific American that measured the efficiency of locomotion for various species on the planet. The animal that was ranked first? The condor. It used the least amount of energy when moving a kilometer. Humans? They came in an unimpressive third of the way down the list. That didn’t look so good. But then someone at Scientific American had the insight to test the efficiency of locomotion for a man on a bicycle. And a man on the bicycle blew the condor away. That was the origin for the famous Jobs quote: “The computer is the most remarkable tool that we’ve ever come up with. It’s the equivalent of a bicycle for our minds.”

This is exactly how I think AI will come to serve mankind. The “Iron Man” way, not “The Terminator” way. We will have the responsibility to harness its strengths, put them to good use, and yes, control it, and those who will try to take advantage of AI’s many shortcomings to their benefit. But the unique powers we have as human beings — our imagination and intuition — won’t be at any risk. Together, with the armor AI provides, we will only be better.