Pinterest wants people to find inspiration for the skin they’re in, and it’s released updates to make searching for it easier.

On Tuesday, the social platform unveiled better detection for a greater range of skin tones in beauty and fashion pins, plus a redesign putting the skin-tone filter front and center.

”For years now we’ve been committed to making Pinterest a more inclusive place, where every Pinner can find ideas that best match their skin tone, style and preferences,” Pinterest’s Annie Ta, product manager, told WWD. Investments in new technologies, such as machine learning capable of pinpointing different skin tones, is all part of the company’s trajectory, she said, adding, “Today’s updates are just one step toward building a more diverse product.”

Like many Bay Area tech companies, Pinterest has had to grapple with issues of equality and representation in recent months. But while it internally reflects, outwardly the platform’s focus on inclusivity arrives in the form of new updates for its skin-tone detection technology.

The company said that, with the latest update, the technology can detect three times more skin-tone ranges on pins in the beauty and fashion category, which should help more people find visual content that’s relevant to them. And thanks to a redesign, a skin-tone filter pops up near the top when users search for certain beauty or fashion terms — such as “summer makeup looks.”

U.S. users were the first to check out skin-tone searches in 2018 but now they’re coming to five more English-speaking markets — the U.K., Canada, Ireland, Australia and New Zealand.

The feature is also heading to other parts of the platform, namely augmented reality lipstick try-ons. Users can try on a shade and see how it looks on people with a similar complexion. It’s only available in the U.S. for now, but plans are in the works to launch in the U.K. sometime “in the coming months.” 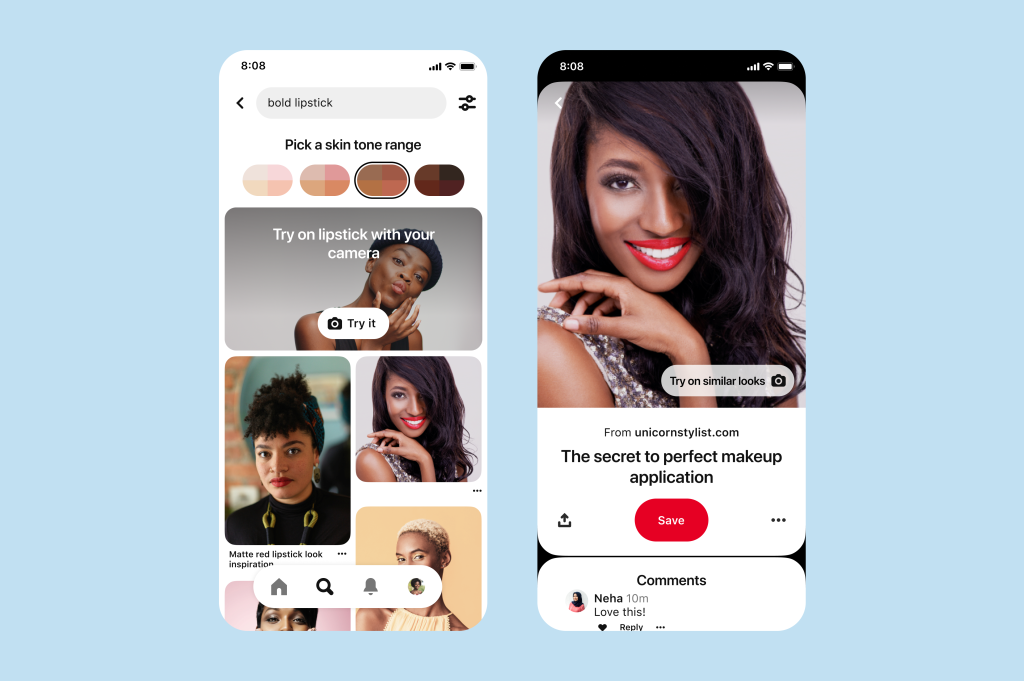 The AR makeup tool has only been available since January, but it’s grown quickly: The technology now covers 10,000 shoppable lip colors across 48 million beauty pins, including those by newly added brands such as NARS, Thrive Causemetics and Clé de Peau Beauté. Users try on an average of six shades, the company said, and they’re five times more likely to show intent to purchase with try on-enabled pins than regular pins.

As updates go, the core changes speak to an evolving maturity of the company’s machine learning technology. But that may matter less than the fact that Pinterest — as an emerging and increasingly influential social commerce platform — is doubling down on its inclusivity efforts during a period of heightened awareness and racial reckoning, even from within the company itself.

In recent months, Pinterest has been on the receiving end of criticisms by former employees about the lack of diversity and equal representation within the organization — a matter chief executive officer Ben Silbermann addressed in a memo to employees outlining steps the company planned to make.

One of its key commitments is to build more inclusive products, Ta said. “We know that getting this right is more important than ever, which is why in June we shared we’re investing more resources in growing the diversity of content on our platform by working with a diverse set of creators and ensuring this work is a company priority.”

Having a platform intensely focused on the interests and passions of an active user base allows Pinterest to keep a finger on the pulse of consumer sentiment. And what it’s been noticing recently is a focus on all things “au naturale,” and that seems to be breaking across racial and gender lines.

“In June, global searches for beauty results based on skin tone including ‘gray hair on dark skin women,’ ‘blonde hair color ideas for fair skin,’ ‘soft natural makeup for Black women,’ ‘brown hair colors for fair skin’ and ‘nude lipstick for dark skin’ were among some of the top trending beauty searches,” it wrote in a company blog post. Meanwhile, searches for “natural makeup videos” were also up 62 percent.

Another notable trend was the rise of male users and beauty searches conducted by them.

In its second-quarter earnings call, Pinterest revealed that more men have flocked to the platform, soaring nearly 50 percent compared to the same quarter last year. Widespread stay-at-home orders due to the coronavirus pandemic could have something to do with it, amid standstills in pro and college sports.

Men also seem to be seeking “creative makeup looks” — at nearly seven times more than this time last year. The reason isn’t clear, but one may wonder if it’s perhaps because Zoom conference calls have become a way of life now.

That may also factor into why male Pinterest users are paying more attention to grooming, with upticks in searches for skin care and beard styles. But that can’t hold a candle to a seemingly deep interest in “long hairstyles for men,“ which has shot up 25-fold.

For a company once famous for attracting white suburban female users, the proof of its pledge for more representation and inclusivity seems to be in the pinning.