The athletic brand's holographic game hits the streets during the 2020 NBA All-Star Weekend to tout its new Sky Dreamer shoes.

Puma's holographic campaign brings a virtual, floating shoe to the streets of Chicago for the 2020 NBA All-Star Weekend.

During the 2020 NBA All-Star Weekend, Chicago got a reality-bending introduction to Puma’s new Sky Dreamer sneakers, thanks to hardware-packing cars equipped with holograms, Puma and Havas Media Group said Thursday.

The 3-D images of the shoe and a basketball floated atop a set of cars as they drove around Chicago, like a piece of the future pulsing through today’s streets. Two cars drove the holograms around town, hitting up roughly 15 locations through Chicago landmarks such as Navy Pier, Chicago Theatre and United Center, as well as hotels, restaurants, shopping districts, basketball courts and city skyline viewing locations.

“We wanted to reach fans in a unique way that was personalized and relevant,” said Ann Unger, head of marketing communications at Puma.

Three-D holograms have circled the entertainment sphere for years — see Princess Leia messaging Obi-Wan Kenobi in “Star Wars,” the “Jaws” shark chomping down on Marty McFly in “Back to the Future” or the 2012 Tupac Shakur concert moment at Coachella, when an image of the departed rapper took the stage with Snoop Dogg.

The tricky thing about hologram projections — or, for that matter, projections of any kind, like films — has always been that they need to be projected onto something, usually a screen, or even gases and aerosolized substances. In the Tupac scenario, the visuals were projected onto Plexiglas.

In recent years, companies have been hot to pursue a business application of the tech. At CES, there tends to be at least a few exhibitors touting holographic billboards and signage. And they’ve worked out a new approach that requires no physical canvas. One benefit is that it allows more flexibility in where to place the images. 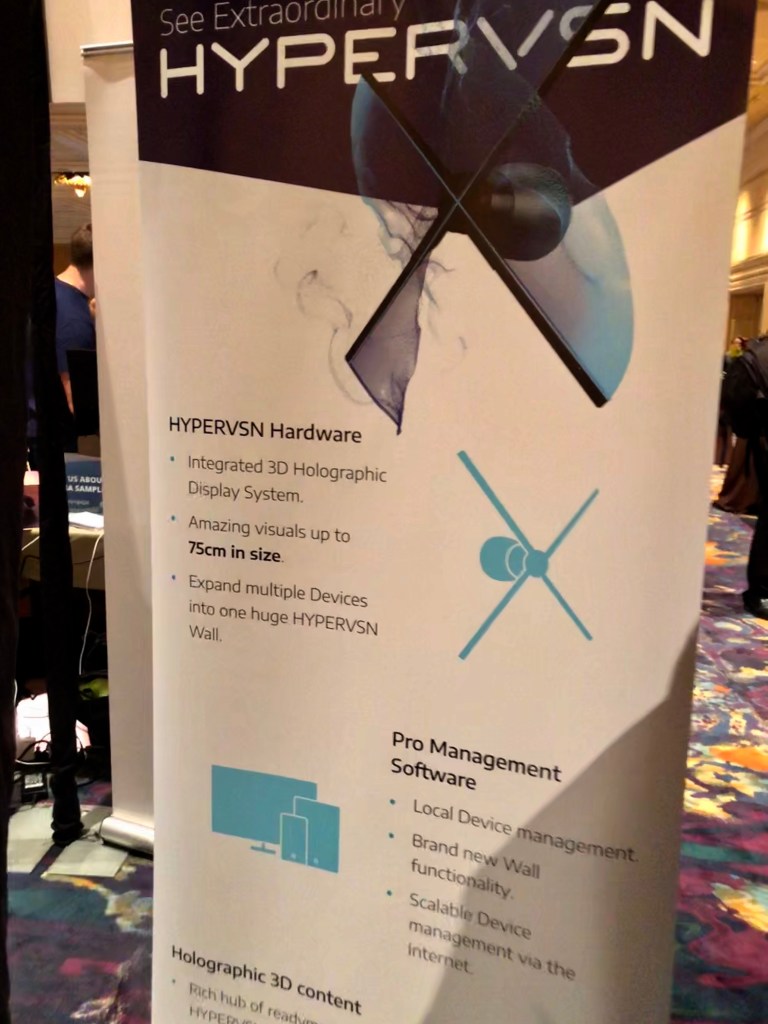 Indeed, Hyprvsn, whose tech was behind the Puma holograms, doesn’t involve a screen. It uses a four-blade, LED-studded device called a Holoprojector that spins at 30 frames a second to create the holograms — in this case, the Sky Dreamer shoes and a basketball.

“We have to move beyond media planning and into building great media experiences for consumers and audiences,” said Havas Media Group’s global chief strategy officer Greg James. “We’ve reimagined how to connect with consumers using location-based digital thanks to a great brand in Puma and a great partner in Firefly.” Havas worked with Whisk, Firefly and Hypervsn to conceptualize and execute the campaign.

Think of it as a continuation of Puma’s fascination with reality-bending tech. Last year, the athletic brand launched the LQD Cell Origin AR, an augmented reality project linking the LQD Cell Origin shoe with an AR app offering extra features, visuals and content.

Augmented and virtual reality usually means people escape the real world and immerse themselves in an alternate digital environment, whether with face goggles or some type of screen. But increasingly, it seems bits of these mixed realities are starting to leap out of the digital realm and pop into real reality.