A look at Samsung's latest Experience Store, which will open this week in Palo Alto, Calif.

Samsung Experience Store, ahead of its opening at the Stanford Shopping Center in Palo Alto, Calif.

Make no mistake, Samsung told WWD: The new Samsung Experience Store — opening Thursday at the Stanford Shopping Center in Palo Alto, Calif. — is not an Apple or Microsoft store, nor is it Amazon.

“This is our version of Samsung retail. The strategy is solely focused on what we have learned about the customer and what experience they’re looking for,” Allister Jones, a senior vice president and head of retail operations at Samsung Electronics America, told WWD Tuesday at a press preview for the store. “This is our interpretation, it’s got nothing to do with competitors.”

For product makers like Samsung and others, retail is a critical matter. It’s the make-or-break destination that delivers a final judgment on whether all the work — from creation, development and iteration to marketing — is successful.

And that’s a major reason why tech giants, from Apple and Microsoft to Amazon, want to own the experience.

The comparisons to competitors are not only natural, but in some aspects, warranted. Like Apple, Samsung will offer its own version of “geniuses” to help people with their devices and hold classes in the venue. And the push to nix checkout lines, a mantle taken up by Apple as well as Amazon, means Samsung employees can check out customers on the sales floor, thanks to the Galaxy device in each of their pockets.

But Samsung’s retail approach differs in some important ways, starting with the space. The roughly 5,000-square-foot physical layout includes six or so modular, break-away areas that can switch around, based on how customers interact and move through the store. The changes can happen on the fly — even overnight, if need be. And some of the segments, like the dedicated Galaxy Fold section or the Smart Things smart home department, require human assistance for personal demos. 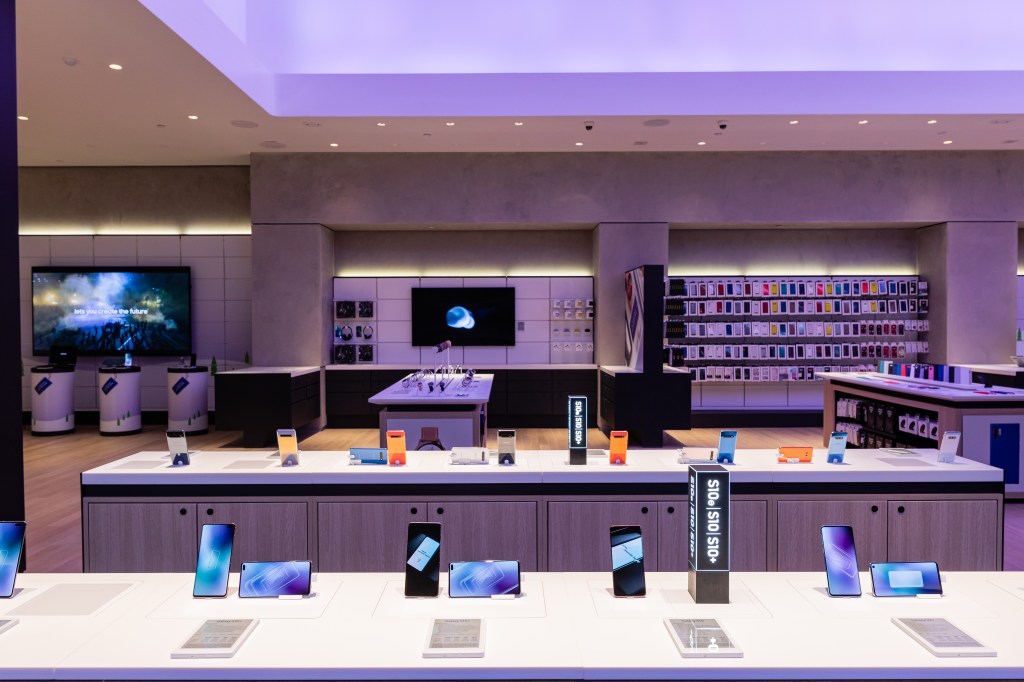 Another view of the Samsung store, with three of the movable modules in view.  Courtesy photo

Neither is the store studded with sensors and cameras, so people can’t just grab items and walk out, company executives said, and there is no automatic monitoring and analysis of how shoppers interact with the products. For insights into that, the information must come from employees.

In other words, Samsung’s major retail innovation is the human touch.

Store staffers are charged with providing input, and the feedback will inform store operations, as well as filter back to Samsung’s nearby corporate and R&D teams.

“It’s really about focusing on the consumers’ ability to interact with our product in a natural and logical way,” Alan Robles, vice president of retail design and development at Samsung Electronics America, told WWD. That intention is apparent in the store’s aesthetic.

“We wanted to focus on creating that neutral palette behind the product, because it’s just like when you shop for anything else — you want to get hands on with it, whether it’s trying on clothes or shoes,” he continued. “Technology is something that you don’t truly understand, until you’re able to handle it, interact with it.

“So this was all about simplifying the interaction with the product and making it about the product… [and] our staff building and communicating that relationship,” Robles said.

It sounds good, but of course it doesn’t mean that Samsung has figured out retail. The company, an electronics conglomerate that makes everything from TVs and kitchen appliances to medical equipment, may have stores in Asia and around the world. But even with years of running brick-and-mortar locations, it still has plenty to learn, particularly in the U.S. The company itself will even admit to that.

“This is about learning and figuring out the operating model, to allow us to build that localization or build the adjustable merchandising strategy to make sure that we actually have the most relevant products inside,” Jones added.

Samsung’s previous U.S. retail efforts focused on educating the public about its offerings, not pushing product. Think showroom, not sales. 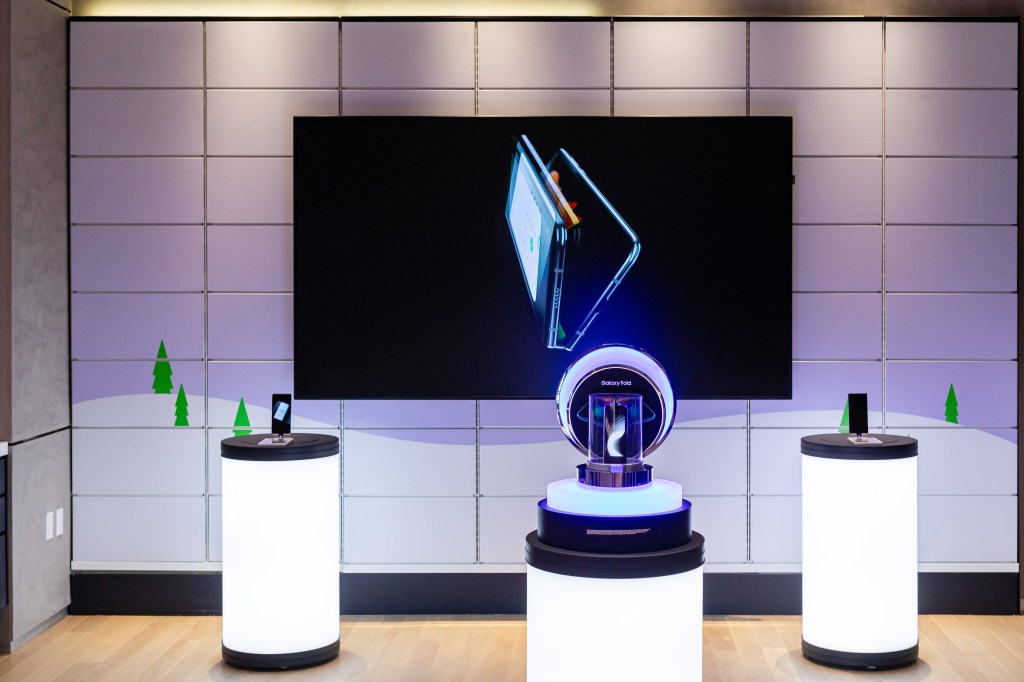 One of its most visible outposts once took up 10,000 square feet in The Shops at Columbus Circle in New York City, before closing in 2011. Since then, the company has opened a new combination office-experiential center in the city and moved into mobile pop-up shops.

On Thursday, Palo Alto will become the fourth in the U.S.

“This store is an evolution from the consumer engagement model of what we did in the first three stores,” said Jones. “It’s allowed us to learn from what we’ve experienced with the customer, and then convert those learnings into applications of how we engage the customer. And really, this is our first move into establishing our new retail presence.”

That may mean doubling down on some of Samsung’s priorities. For instance, from the large front windows, the first thing passersby will notice is “5G” set in large letters. 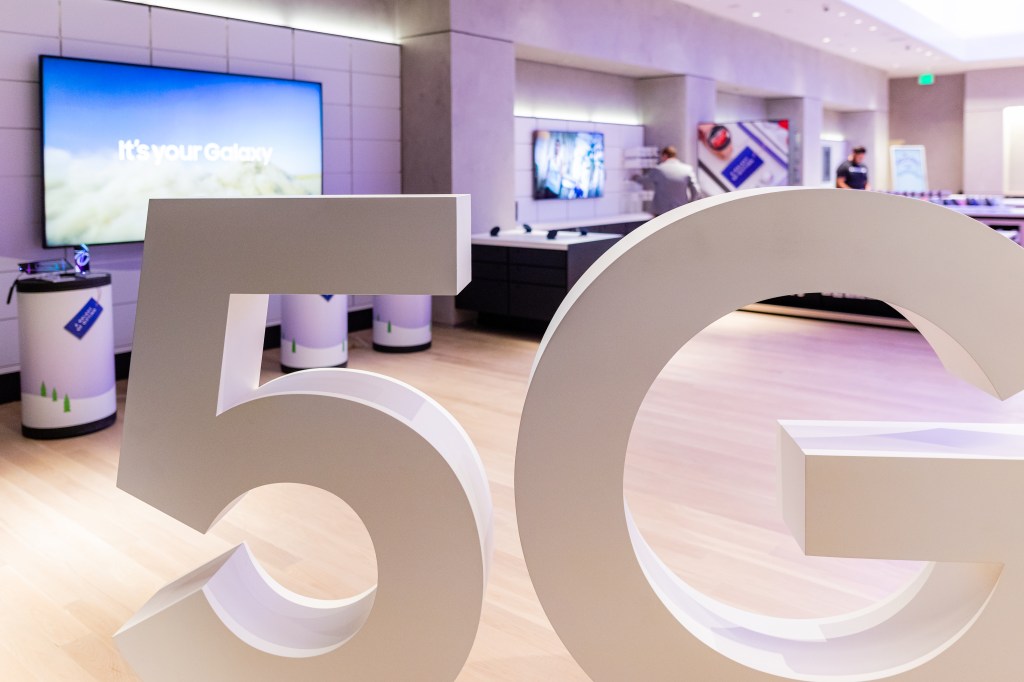 5G refers to super-fast, next-generation cellular connectivity. Here, it amounts to Samsung’s window display and a major marketing hook. The S10+ 5G and the Note 10+ 5G are available in places that have 5G coverage, according to Jones.

Further into the store, the rest of the phones and phone-related merchandise are centrally located. The lineup offers a rare look at the entire Galaxy brand phone selection. The company doesn’t send its whole collection to third-party retail stores, sites or carrier partnerships.

Of course, where there are smartphones, there are cases, and the company has a bit of added delight up its sleeve on that score: Some of the cases include some outside brands like Otterbox, as well as special Marvel versions that automatically put exclusive content on Galaxy phones when the case is applied. Pop the phone in, and a new wallpaper and other features show up.

The other sections are segmented into areas, such as those for the Galaxy Fold, Samsung’s tablets, small business or “b-to-b” offerings and wearables, such as the very popular Galaxy Buds and the Galaxy Watch Active2 smartwatch, as well as myriad straps. 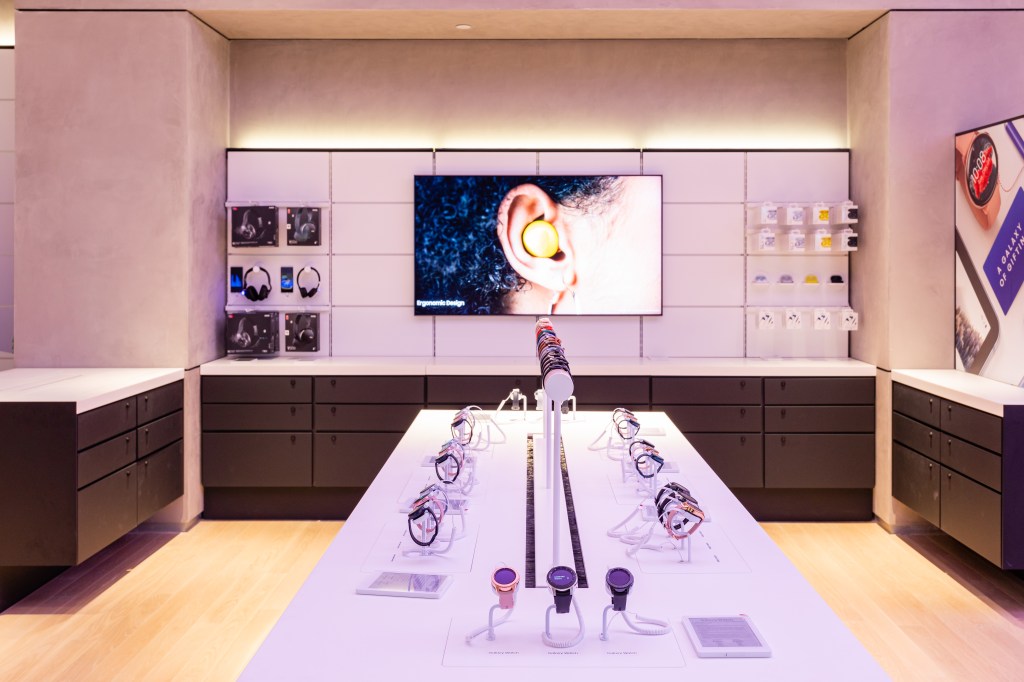 “We make sure that we’ve got a full assortment of accessories via color trends, and we’re trying to make this a little bit more of a fashion-friendly item, rather than just a piece of tech. We can do that with, accessories, with colors,” Jones said.

Of course, like the Galaxy Fold, the new flagship will be an important destination for new products. So if rumors pan out — like a new version of the Galaxy Buds or supposed February release of a new Galaxy S11 or clamshell foldable phone — Samsung will have a front-row view of how consumers engage with the company’s hottest tech.