Samsung just launched an all-out Bixby offensive with a smorgasbord of new device announcements that all boast its smart voice assistant.

In Brooklyn, N.Y. on Thursday, the South Korean tech giant took the wraps off of its latest line of consumer gadgets, including its latest 6.4-inch Note 9 smartphone, Galaxy Home Speaker and Galaxy Watch. The headlining “phablet” phone comes with a boatload of features, not least of which is a more elegant Bixby voice assistant experience that understands natural language and remembers the user’s tastes.

“From the very beginning, Bixby was designed with a simple purpose — to help you get things done,” said Ji Soo Yi, vice president of Samsung Electronics. “We are continuously refining Bixby, so now, on Note 9, it’s more conversational, personal and useful.”

Bixby can remember the user’s tastes and understands natural language. In making a restaurant reservation, for instance, the tech may remember that the owner prefers, say, French food and can adapt search results to focus on this cuisine, before offering to make the reservation. The assistant also integrates with some Google services, pulling a few of Google Assistant’s powers into the mix. In a sense, it’s almost like packing two voice assistants into one.

“We’re working with many partners to build this seamless integration into Bixby. This means that users can access many of their favorite services in a snap,” Yi said. “For our partners, they can reach many more potential users.”

Some of those use cases may veer into shopping, at least eventually. The company already signaled its intentions earlier with its S9 and S9+ smartphones. The cosmetics industry may remember them as Bixby gadgets that integrated Modiface augmented reality makeup try-ons and purchases as out-of-the-box camera features.

Speaking of cameras, the Note 9 pushes further into artificial intelligence, with a more refined dual-aperture shooter the company calls an “intelligent camera.”

Drew Blackard, senior director of product marketing, described the array — with an 8 megapixel front camera and dual 12 megapixel rear cameras — in gaffe-proof terms: “Some things are always going to be out of our control,” he said. “Maybe your friend blinked, maybe you didn’t see the smudge on the lens until it was too late. Seriously, there’s nothing worse than asking someone to take a photo of you and your friends, only to get your phone back and realize that the photo looks terrible.

“Well now, whenever Note 9’s camera detects a flaw, like closed eyes or image blur, it will automatically notify you, so you can take another shot before the moment’s gone,” he added. Like many rival devices, the unit can auto-adapt to the user’s environment, letting in more light for night shots or contracting the aperture for bright, sunny days.

The AI also offers scene recognition, which can identify subjects like flowers, food and landscapes. “And based on the scene, it optimizes the color tone,” Blackard added, “so that every shot you take is Instagram-ready.”

The “more is better” theme extends to other features. The Note 9’s beautiful Quad HD+ screen and new, upgraded S-Pen, which can act like a magic wand or remote control, may pale in comparison to the phone’s beastly storage option: Customers can choose up to 512 GB of onboard storage and then double it with a memory card, which would effectively make the Note 9 the first mobile device with a full terabyte of space.

That’s not just good news for users, but for app developers constrained by the hardware’s space limitations.

Had that been all, Samsung’s announcement would have been head-turning. But then, the company unveiled its latest foray into smartwatches with the new stand-alone Galaxy Watch. The move looks like the tech company took a few cues from design-friendly Fossil and Apple‘s cellular-enabled wearable. 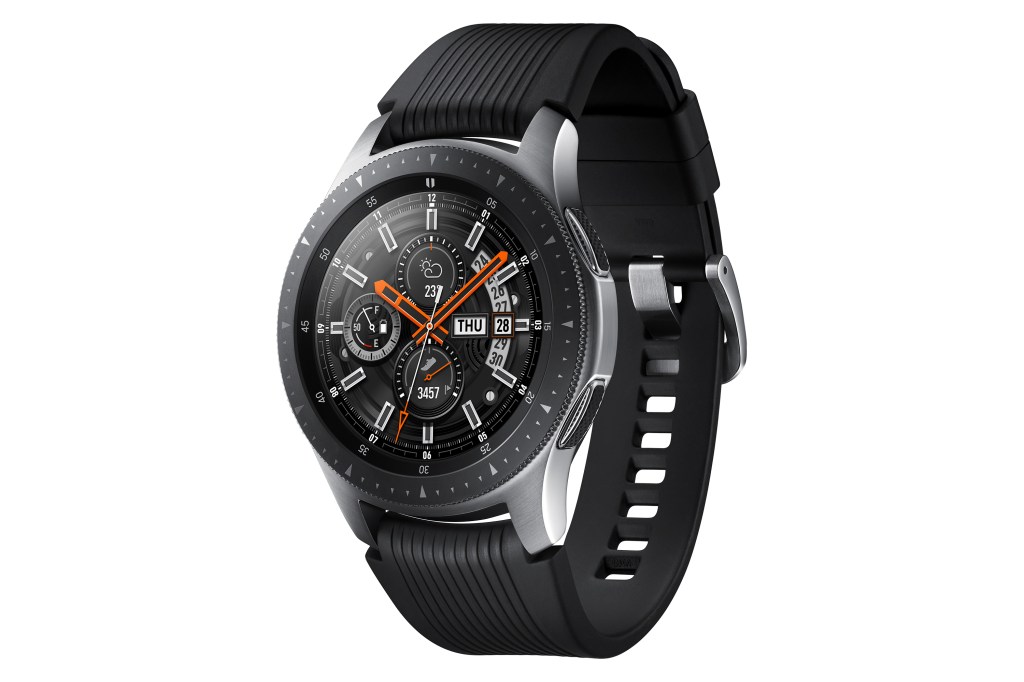 “People love that the Galaxy Watch looks like a real watch,” said Elina Vives, senior director of marketing. “With our signature circular bezel and rotating design, it’s more than an aesthetic. It’s an intuitive way to control your watch.”

In the past, the company’s Gear watches have sometimes veered clumsily into “geek” territory. While it did better with its Gear fitness wearables, some of its early attempts made users look like they had wee smartphones strapped to their arms.

The circular watch offers more traditional appeal, alongside features consumers would expect of a modern smartwatch. Available in two sizes, 42-mm. and 46-mm., the device offers fitness tracking, water resistance (to five atmospheres) and support for LTE cellular connectivity. It also pays attention to things that matter to mainstream consumers, such as longer battery life — of “several days,” as Vives vaguely put it — and more than 60,000 watch faces to choose from. And if tapping away at a little screen is not attractive, users can talk to their wrists, courtesy of Bixby.

The Galaxy Watches may not be the most gorgeous wearables available today, but they look like promising style improvements. As for whether they’re worth the $330 to $350 retail price, consumers will be able to decide for themselves on Aug. 24.

Samsung then went from the arm to the home. Making its long-awaited entry into the voice speaker space officially, the company showcased its brand-new Galaxy Home Speaker.

Details on the Alexa competitor were scant. But at first blush, the bottom-heavy shell propped on three legs gives it a “campfire pot” aesthetic on the outside, while inside, the appliance packs eight microphones for far-field voice recognition, so it can hear and recognize commands even from a distance. The company didn’t offer a release date or price.

The Galaxy speaker will have quite a schlep in front of it, to catch up with the likes of Amazon, Google and even Apple. But there’s reason to watch this newcomer. 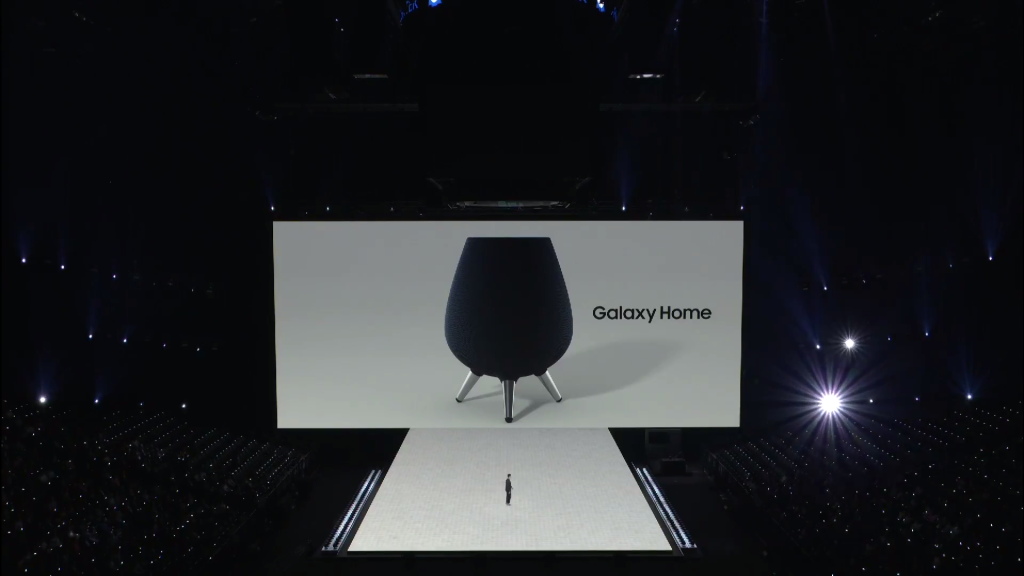 Consider the playing field: Each company has its own unique attributes. Amazon has market dominance, built off the back of its hugely robust e-commerce market. The smarts in Google’s ubiquitous assistant pulls in from its large breadth of services and is easily and readily available in a large range of mobiles and other devices, including smart home gadgets. While Apple’s Homepod still lags, the unit pairs high-quality audio with its own HomeKit smart home features, and it definitely has room to tie more into its significant iOS and Mac user base.

Samsung comes bearing many of those key attributes in one product. Not only does the company make the world’s top-selling smartphones, but for years, it has been dabbling with bringing home-goods shopping to the conglomerate’s array of kitchen appliances — like refrigerators, ovens and laundry machines. It’s also worth noting that Samsung is a display maker that puts out one of the world’s most popular brands of televisions, a fact that could give it a leg up on the display-plus-voice approach that Amazon and now Google are pursuing.

In other words, Samsung may be late to the smart speaker market, but it could gain ground quickly, if it plays its cards right. At that point, the Galaxy Home could push further into the beauty and fashion sectors, building off the Bixby groundwork that it’s already laid down. It has the ecosystem, the user base and much of the expertise it needs. Should its partnerships ramp up from here, that would speak volumes.