Shopify Merchants Can Now Use 3-D Modeling and Video

Rebecca Minkoff has been testing Shopify's new support for 3-D models for 40 of its bags.

Supporting product pages allow web site visitors to do more than just view an item; they can spin them around to see the back, bottom or sides. And because of Shopify’s work in augmented reality, they can even use their phones to place the virtual object in the real world.

The move comes during a rarified moment in retail, as consumers en masse stay home due to the coronavirus. Naturally, the crisis has put most of the focus on essential goods, like groceries and drugs. But in some corners of the retail world, these challenging times are forcing executives to re-examine how they can best serve shoppers online, whether now or in the post-pandemic future.

It’s worth noting that Shopify’s efforts were in the works well before COVID-19 scuttled so much of brick-and-mortar shopping across the country. It might even help brands, at least those that can weather the turbulence.

Daniel Beauchamp, Shopify’s head of AR and VR, offered WWD a demo of the new tools using a Rebecca Minkoff web page  as an example: “If I tap on this ‘View in Your Space’ button, it’s going to open up my camera, and I can place that bag right in front of me, where in usual AR fashion, I can walk around it, see it from any angle, get up close to look at details,” he explained. “I can see how realistic materials, like this buckle, get the reflections, and I can get ultimately get a good sense of the scale of this bag and compare this to handbags that I might already own.”

According to the company’s numbers, 3-D models used in augmented reality increased conversion rates by up to 250 percent on pages that feature the option.

The new Shopify tools work on merchants’ web pages — which means shoppers don’t have to download a separate app, and retailers don’t have to fiddle with developing and continuously updating a mobile app to make it work.

Shopify itself doesn’t create the actual visual assets. For that, merchants work with an outside vendor to create the models.

“They have networks of 3-D artists, who will create a 3-D model based off of the photos, just as reference imagery,” Beauchamp said. “That’s going to ensure that the product is modeled as accurately as possible.”

Rebecca Minkoff, which has been testing 3-D modeling and video within Shopify, relied on CGTrader, an online 3-D modeling marketplace for designers, to create the necessary visuals for a small selection of merchandise.

“We selected 40 handbags, as kind of our test pilot,” said Uri Minkoff, brother of Rebecca and the brand’s chief executive officer and cofounder. “That’s kind of our main dominant category. We started the pilot in the fall, and so we wanted to get a good mix and then also compare the behavior to other like product and see what sort of results we get.”

Here’s how he explained the process: “We would just send our standard photography — kind of front, back and inside — over to [CGTrader], and they would render it. So basically what that created, when the customer swipes through the views of the product, depending on what sort of device they were on, they can get a nice 3-D rendering view. And we had a call to action, we put an icon on so that the customer would know to click on it and could then rotate that on 360 [degrees].” 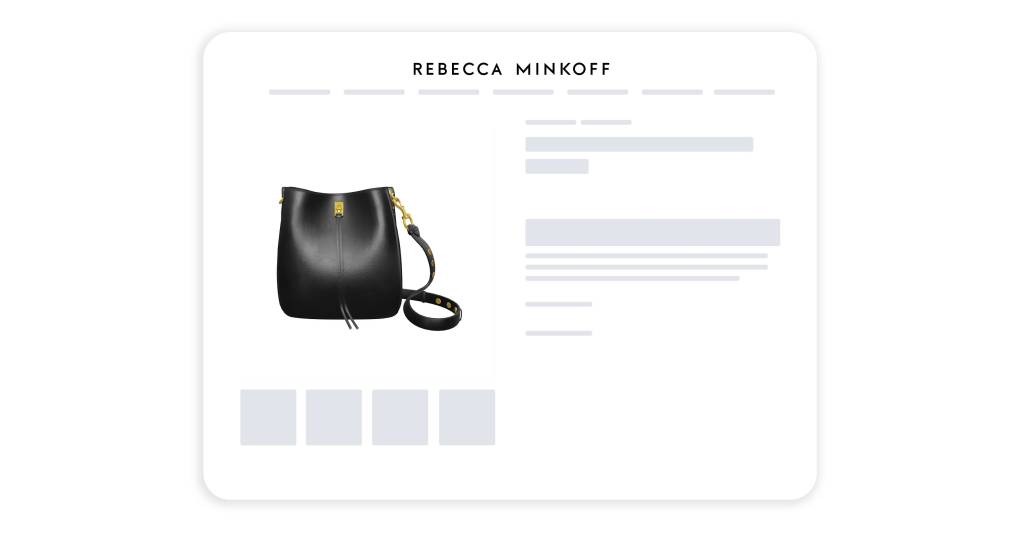 Visitors to select product pages on Rebecca Minkoff’s web site are able to turn the bags and see different views, as well as use augmented reality (on mobile).  Courtesy image

On mobile, users can activate the AR feature, which places the virtual item in the room, as seen through the smartphone camera.

After going live in November, the brand charted tens of thousands of interactions with the 3-D models. As many as 22 percent of shoppers who visited a product page with a 3-D model on it interacted with it. One style did even better, at 31 percent.

“And we saw significant lift in adding to cart and conversion, for those that played with the 3-D models, compared to the products that  didn’t have that,” he continued. “For those that actually then went on to play with the models, we had over 30 percent lift in add to carts, and close to double that in a lift incursion, compared to other similar products that didn’t have these features.”

He called the results “stunning and significant,” and said “we were pretty blown away by it.”

As for what’s next, the brand is keeping an eye on AR for fashion apparel, noting that more vendors and platforms are emerging that are trying to solve the challenges — like believable virtual try-on and offering better fidelity. In the meantime, the company plans to invest more in video, which should be music to Shopify’s ears, as the latter just rolled out new support for direct uploads.

The changes mean that merchants won’t have to embed videos from other platforms onto their pages.

Three-D models, AR and video have been huge in social media, and they aren’t new to shopping either. But across retail, they still haven’t been as ubiquitous. Now everyone, from small to large businesses, will have access. Shopify, the U.S.’ second biggest e-commerce platform, has a reach that extends to more than a million merchants throughout 175 countries. And by last count, Shopify rakes in more than $1.5 billion in annual revenue.

If someday the company supports apparel AR too, the market might then know that the tech has really arrived.

Hopefully by then, the public will be able to put these difficult times behind them and be able to embrace the good things in life again.