Shopify introduced a new AI-powered fulfillment network, plus a bevy of partner and developer tools to "help level the playing field."

In June, Shopify announced a new fulfillment network, to help smaller merchants ship faster and compete with the Amazons of the world.

The Shopify e-commerce platform for direct-to-consumer brands unleashed a bevy of updates on Wednesday, with new partner and developer tools, as well as an artificial intelligence-based fulfillment system.

The company took the wraps off an all-new Shopify Plus, new Shopify Point of Sale (POS) software and an intelligence-powered Shopify Fulfillment Network, alongside expanded capabilities for languages, payments, brick-and-mortar service, interactive media and more. The company made the announcements at its Shopify Unite conference in Toronto.

“This year’s announcement brings brands the ability to manage a business, not just a store,” Loren Padelford, general manager of Shopify Plus, told WWD.

Of the lineup, its approach to fulfillment may be the most intriguing development. Typically, only large operators deal with advanced fulfillment systems, but Shopify wants to loop in more small and medium-size merchants, with 10 to 10,000 shipments daily. Eventually, it plans to expand the scope to support three to 30,000 packages daily.

The system, with its two-day shipping promise and immediate early-access availability, appears to take direct aim at Amazon — even as the e-commerce juggernaut is looking to speed things up with one-day shipping.

When asked about comparisons to Amazon, Padelford said, “We know that fulfillment is one of the top pain points our merchants face, and that fast shipping helps convert sales. We’ve built our Shopify Fulfillment Network to help merchants constantly meet the demands of their buyers, who have been largely conditioned by fulfillment titans and big-box retailers.

“With our initial U.S. locations, our merchants will be able to fulfill the majority of their orders in 48 hours — leveling the playing field so independent business owners can compete with anyone,” he added.

Certainly, both Shopify and Amazon have data and artificial intelligence-driven processes in common, and perhaps even more so now.

Merchants will also be able to set different rules for shipping and pricing across various products, and more visibility into their fulfillment processes, including into third-party apps and services.

Updates for the higher-tier Shopify Plus, largely aimed at bigger sellers or complex operations, also offer more visibility into the whole of merchants’ operations. The tools were designed to deliver a “consistent experience” over various stores, as well as a simpler, more automated process to launch new shops in a few clicks. The new Shopify Plus will come “later this year.” 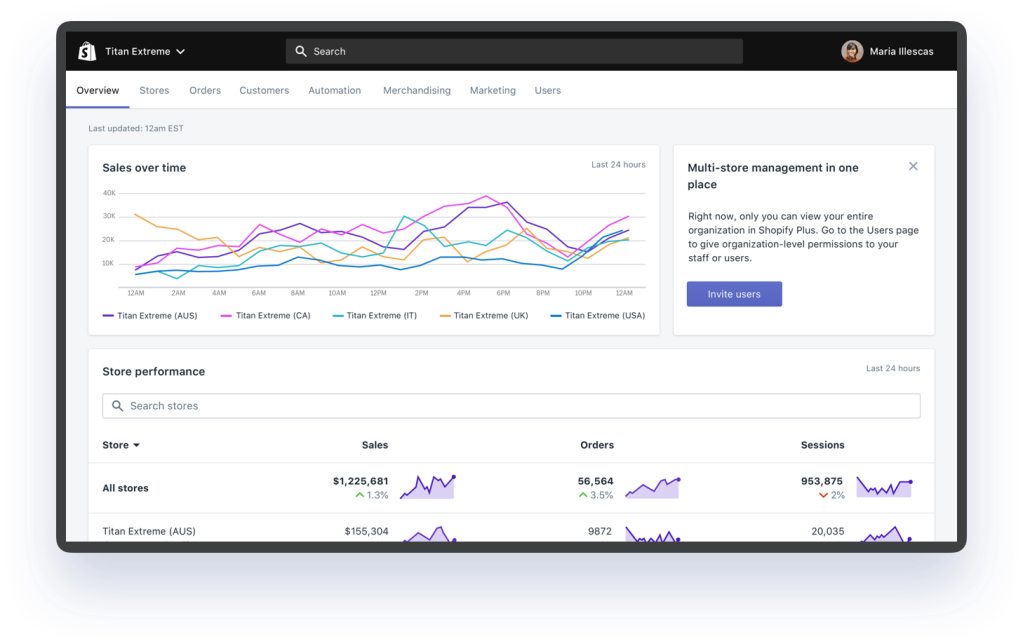 A look at Shopify Plus’ multistore experience dashboard.  Courtesy image

This “white-glove,” enterprise tier may represent only 5,300 merchants out of the platform’s total 820,000 or so, but it draws 26 percent of the company’s total revenue. Naturally, the SAAS platform wants to optimize this end of the business and help those merchants reach their peak retail potential. Toward that end, the company is also offering tools like Shopify Flow, which automates workflows for repetitive tasks and allows clients to test new ideas more easily.

“Now with the all-new Shopify Plus, our biggest brands can centrally manage and view all of their stores, all the of users that they have, and have the capability to go to one place and understand the entirety of their operations,“ Padelford explained. “This gives our merchants the functionality to experiment more than ever before, by lowering the barriers to build or open a new store, whether online or offline.”

Speaking of offline retail, the company also beefed up its point-of-sale tech. The solution, which is already in use by more than 100,000 merchants, now features new software and hardware that are “faster, more intuitive and more scalable,” according to the company.

Shopify is also offering a Tap & Chip Case to untether store associates from cash registers. With the handheld unit, they will be able to check out and take payments as they roam the store. Store managers can set more granular permissions and access for each staff member, and the apps can call up loyalty and promotion rewards right at checkout.

In addition, the company beefed up international support with the addition of 11 more languages, for a total of 17. Now Traditional Chinese, Simplified Chinese, Danish, Dutch, Finnish, Hindi, Malay, Norwegian, Swedish, Korean and Thai join the fray. Thanks to another new tool, merchants will be able to store translated public-facing content, such as product info, collections and blog posts.