Q&A: Up Close With Snapchat

Snap’s Carolina Arguelles and Vanessa Guthrie on the latest announcements, that Louis Vuitton partnership, content and how the platform’s building for the future.

Snap just unloaded a smorgasbord of updates on Thursday, giving developers and brands new tools to make the most out of its constantly evolving platform — along with some nifty examples of what partners can do with them.

Hot off of the Snapchat announcements, WWD spoke with Snap’s Carolina Arguelles, head of product marketing for Snap’s camera, and Vanessa Guthrie, director of content, to get more insight into these intriguing efforts, the company’s plans for the new tools and where it goes next.

WWD: The company brought up some interesting projects, like the Louis Vuitton partnership on its latest AR project. Can you shed more light on that?

Carolina Arguelles: AR is becoming such a critical way for businesses to not only reach their customers, but to connect with them in entirely new ways. And while they, on Snap, started mainly as a form of entertainment and expression, it’s really become an incredible tool for utility in commerce. And these new features especially are ones that brands are really leaning into, because they see the opportunity for how it can redefine the customer relationship that they’re building, and start to bridge their identity on digital versus their identity in the real world.

About Louis Vuitton, in particular, we worked really closely with them. Think about all the variations of things that are so classic, from those LV prints that everyone knows to, of course, their logo, and every way that Louis Vuitton is shown in the physical world. 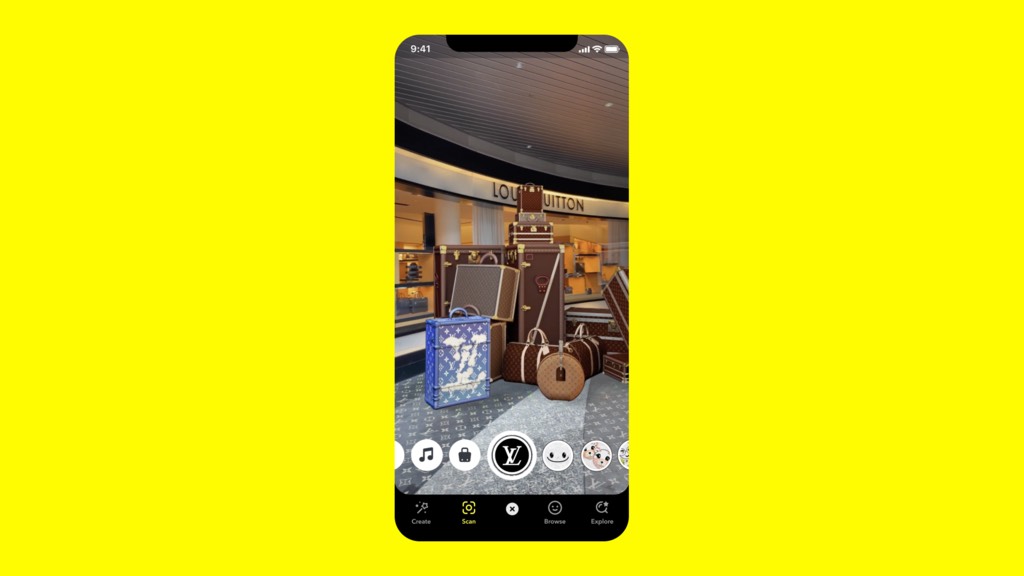 Louis Vuitton is working on an upcoming feature that lets fans scan the LV logo and see products.  Courtesy image

We worked really closely with them to train a very custom model with thousands of images of their logo out in the world, so that when people scan that logo with Snapchat — which they already have; our camera opens so much of the time, because the camera is so core to our experience — they’re able to connect with Louis Vuitton in a deeper sense, able to see some of the products they’re featuring and interact with them in a much deeper sense.

So that’s kind of what we’re doing with Louis Vuitton. It’s this idea of owning the digital layer around your physical goods, and starting to bridge that gap between the physical world and the digital one. It was a similar approach to what we did with Too Faced Cosmetics [virtual try-on and tutorial lenses].

What was most exciting about that Too Faced Cosmetics example is that it doesn’t take a really complex model to build. That’s something that actually any brand can build themselves using Lens Studio. And so it’s pretty exciting to see how these brands are starting to use our camera to help enhance that customer experience.

WWD: Your Camera Kit announcement seems like a pretty big step forward, since it allows your AR to go into other apps. Can you talk about that?

We know that the camera will continue to actually grow in its importance on other platforms, not just our own. If there’s a brand that’s already building all of these AR experiences on Snapchat, with Camera Kit, those AR experiences they’re already building aren’t just isolated to our own app. They can now also live in their app with Camera Kit, because they can access our camera right in their app as well.

WWD: It looks like Nike is an early partner on the new kit. What are they doing with it?

WWD: Let’s talk content. How does the camera factor in?

Vanessa Guthrie: There are so many things that are really exciting for us on the content side. This is the first time from a Snap Originals stance that we are integrating the camera, and they are experienced in a much more purposeful way. That also just goes beyond novelty in the experience.

When you think about a show, like Face Forward, we are renewing it, but bringing this amazing AR element into it. Anyone who’s watching can experience the makeover themselves and experience the beauty products in a way that’s never been done before, from a Snap Originals stance. So we’re really excited about what the opportunities are for beauty and fashion, when it comes to Snap Originals and bringing the camera over into the content side.

WWD: It looks like Snap has been on a tear, building out various parts and tools, and now it seems like these things are starting to tie together.

V.G.: I think what we do very well is build things brick by brick, even though internally we’re thinking way ahead into the future. And being at a company that is all about innovation, it makes so much sense for us on the content side to continue to innovate in the shows that we have. And so using the camera and taking these AR experiences into these new shows is just a first step toward many other things we have planned for the future.

C.A.: In general, the insight that you just pulled out around, how now it all looks like it’s coming together, but it wasn’t an accident, is completely true.

At Snapchat in general, when we think about building our products, we’re really thinking about a vision for the future that is going to enrich people’s lives, that’s going to make people’s lives easier, more fun and more connected.

Right now, sometimes we’re so isolated, where our digital screens and our phones divide us from the real world happening in front of us. And so when we think back to everything we’re doing, it’s all been foundational stepping stones to get us to this vision of the future. We’ve oftentimes talked about it as computing overlaid on the world — one where the camera can really start to integrate the digital world and our physical one.

WWD: That camera is so core to what you do, isn’t it? How does it inform everything?

C.A.: Even from the very beginning. We open up straight to the camera, and it’s intentional. We did that because it encouraged people to use the camera every single day, to become comfortable in the camera, to start to think about the camera as more than a tool to just take a photo.

So we started there. Then we introduced AR, so that we can get people familiar with AR. AR and other platforms sometimes still feels too techie in a way, and so you don’t see mass adoption, where people are a little bit intimidated by it, or it seems confusing.

But on Snapchat, we started with vomiting rainbows and hotdogs. And we did that because it got people comfortable and really excited. That silly application made people really familiar with the format overall.

At the same time, and separately, we started investing in the incredible premium content on the platform, getting people really a new type of way to consume content on their mobile phone. And then the next phase that we’ve kind of gone through is OK, the silly mist, lowers your inhibitions and got you to use AR every single day. Even if you think of it as a funny filter, you don’t realize the technology behind it.

Now — and over the past year especially — we have the behavior, which is really hard for other platforms to get. We are now introducing these new types of utilitarian experiences. These commerce experiences. Because the most difficult thing is getting people in the camera and using it every day, and we’ve kind of built [that] as a foundation. And we’ll continue to see how now all of these things can come together. And eventually, even our separate investments in Spectacles will continue to build toward this future of computing overlaid on the world.

WWD: The system has been advancing its tools, which have been years in the making, and now, as we see them click together, we have to wonder where the platform goes from here?

V.G.: From a content perspective and from Discover, and certainly Snap Originals, we will still continue to invest in great storytelling, and you don’t need any other bells and whistles. But everything just needs to be so made with the intention that it’s made for mobile, and every single thing we do, it wants to be on mobile. You can’t imagine it any other place. So that will without a doubt continue for the next several years, if not hopefully for quite a long time after that.

C.A.: You know, with a lot of other platforms, when you open the home of that platform, it goes straight to a feed, where you’re watching other people’s lives or the world’s updates.

On Snapchat, when you open up the application, it opens to the camera. It opens to you. And so when you think about where we’re going, what’s so center to everything we’re doing is that we’re building the most personal app that we possibly can. An app that truly is you and feels like you — it’s your real friends, and it’s honest, and it’s something you can trust.

WWD: Are there plans to extend these updates to your native shopping on Snapchat?

C.A.: Commerce is a huge investment area for us. We recently continued to innovate in our product feature set on the advertising side around commerce. So you know, having dynamic product ads, and ability for any brand to upload their product catalogue, to be able to create really dynamic experiences that live more natively in Snapchat, is something that is definitely a focus area.

We’ve had native commerce in Snapchat for quite some time before some of the other big platforms invested as well. Mostly those native commerce experiences on Snap are being powered today by Shopify, so our Shopify merchants can pop up their own native commerce stores right within Snapchat.

We are continuing to think through how we expand that native experience to not just Shopify merchants, but to all types of brands who might not be on Shopify. So it’s definitely a continued investment area for us. We really always aim to create the most frictionless experience.