“So I click the button, and I get a 10-second clip, captured by…the right or the left camera?” this WWD reporter asked a representative at Snap Inc.’s San Francisco office. Turns out, both of the new Spectacle’s HD cameras were on duty with a single tap, setting the sunglasses to “video capture mode.”

Trying out a new, category-defying gadget inside a highly controlled environment is one thing. Taking it for a whirl in the real world is another.

People on the street, upon seeing the Spectacles 3 — which goes on preorder today — tend to stare for a variety of reasons. Techno-savvy folks realize they’re looking at camera-equipped face gear, and wonder first if it’s recording and second, if it’s worth the high $380 price tag.

The first is easier to address: There are lights — a circular, moving pattern on the outside, and an inward-facing indicator — to tip off the subject and the wearer that the cameras are on and recording.

With that, there’s no repeat of the “glasshole” controversy that plagued Spectacles predecessor Google Glass more than five years ago. The futuristic monocle that enchanted the likes of Diane von Furstenberg was not embraced by the public, which found the face-mounted camera creepy.

It also didn’t help matters that no one else but von Furstenberg could even pull off the now-defunct wearable without looking like a cyborg.

Fast-forward, and Snap is readying to launch the third version of its own camera glasses.

Snap Labs, Snap Inc.’s skunkworks team that created Spectacles, sat down with WWD and explained the design and development rationale.

“With Spectacles’ first generation, we wanted to see if people liked capturing first-person perspective using a personal accessory,” said Lauryn Morris, Snap Labs’ product strategy manager for Spectacles. “It was really simple to use, fun and approachable. We heard loud and clear that people loved being able to stay in the moment while capturing the world around them.

“We also knew that we could do a lot more in terms of style and functionality,” she added.

Indeed. Looks matter for a connected accessory, especially one worn on the face.

Snap’s first connected glasses was a rather plasticky contraption that intrigued, but ultimately baffled the consumer market in 2016.

Version 2 in 2018 came in two forms, as a Wayfarer-like style and another that aimed to conjure some retro, Jackie O flair. But they still had a plastic feel and an even chunkier body.

Snap wound up taking a $40 million write-off on Version 2.

The company seemed to learn a thing or two from the past. Now tech fans aren’t the only ones doing double takes at the sight of the slimmer, metallic and highly designed Spectacles 3.

From a fashion perspective, the latest model stands apart from the cheaper-feeling, almost cartoonish aesthetics of the previous versions. The frame, with replaceable lenses for prescriptions via Lensabl, is hewn from steel, and the housing for the electronic components, while still plastic, is more matte and blends in discreetly at the interior of the glasses.

The bar across the front is more than an accent — it steadies and stabilizes the whole rig, so that the cameras can work together properly and capture depth.

The effect is something “more fashion than nerd,” as one WWD editor put it. 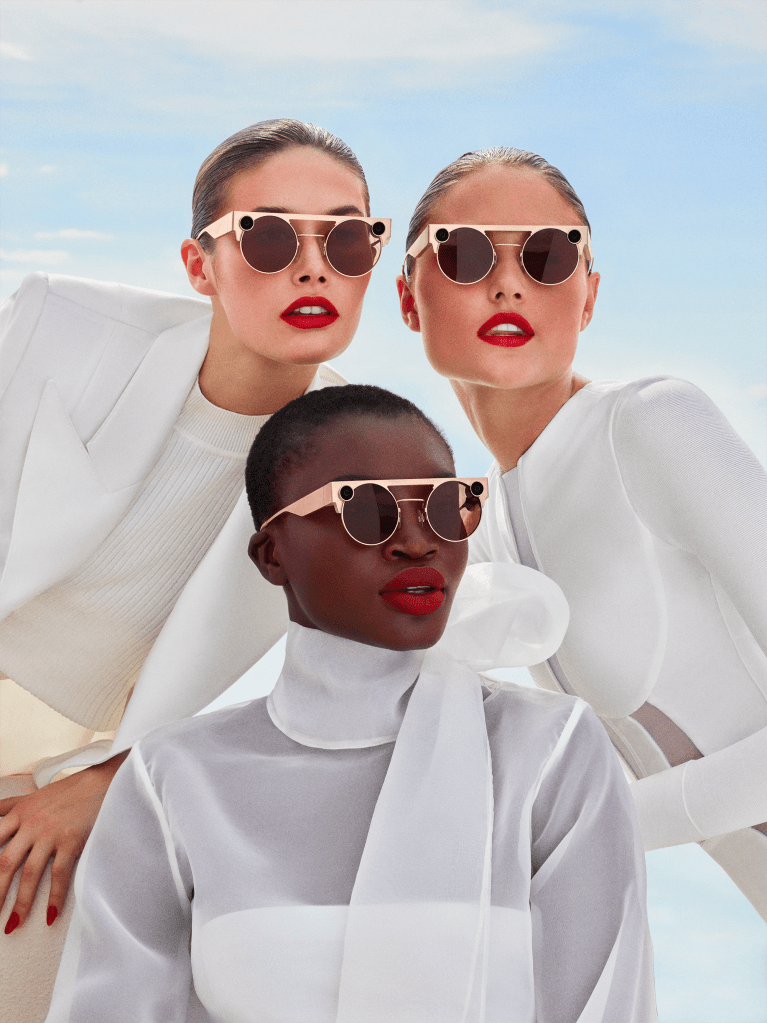 Morris summed it up with a fashion truism: “Form is just as important as function,” she explained. “You know very well that people buy clothes and accessories because they want to express their style and their values. And it’s really important that we apply that principle to wearable tech.”

Given Snapchat’s fascination with fashion, the glasses could show up on the runway or behind the scenes at some point — á la Google Glass. After all, Snap, by admission, is targeting creatives with this product. Aesthetically, Snap Labs crafted the device to appeal to these design-forward users, and it also gave them plenty to play with on the inside.

According to Matt Hanover, from Snap Labs’ product team, the major new feature is depth, thanks to the two HD cameras at the corners of the glasses. The new hardware and software lets users add 3-D effects — like hearts, a moving bird, morphing globs of color, streaks and other elements — in front of and behind subjects, as well as perspective that sends visuals careening toward or away from the viewer. Photos shot by Spectacles two cameras can even be viewed as 3-D images.

Spectacles 3 connects to the Snapchat app, allowing users to wirelessly download images and short video clips to the app, and then save, edit and share on the network, YouTube or via e-mail and texts. An enterprising user can also capture a string of as many six 10-second video clips.

The cameras capture photos at 1728 by 1728 pixels and videos at 1216 by 1216 pixels at 60 frames per second. The unit is also equipped with four microphones, 4 GB of storage, GPS, 802.11 ac Wi-Fi, Bluetooth 5.0 and enough battery to capture and sync up to 70 videos per full charge. The sunglasses feature tinted lenses with ultraviolet-light protection.

The company can’t wait to see what bona fide content creators and agencies will do with this tech. Hanover called it “an important building block for the future.” Unlike companies such as Apple, which is rumored to be working on its own AR headset, Snap’s future looks more like a cooperative affair.

“We think it is important to ship products and get feedback from real customers and from the world around us, rather than locking the doors and going into strict R&D mode, and coming out several years later with a product,” he said. “We think it’s more important to have these iterative products somewhere along the way.” 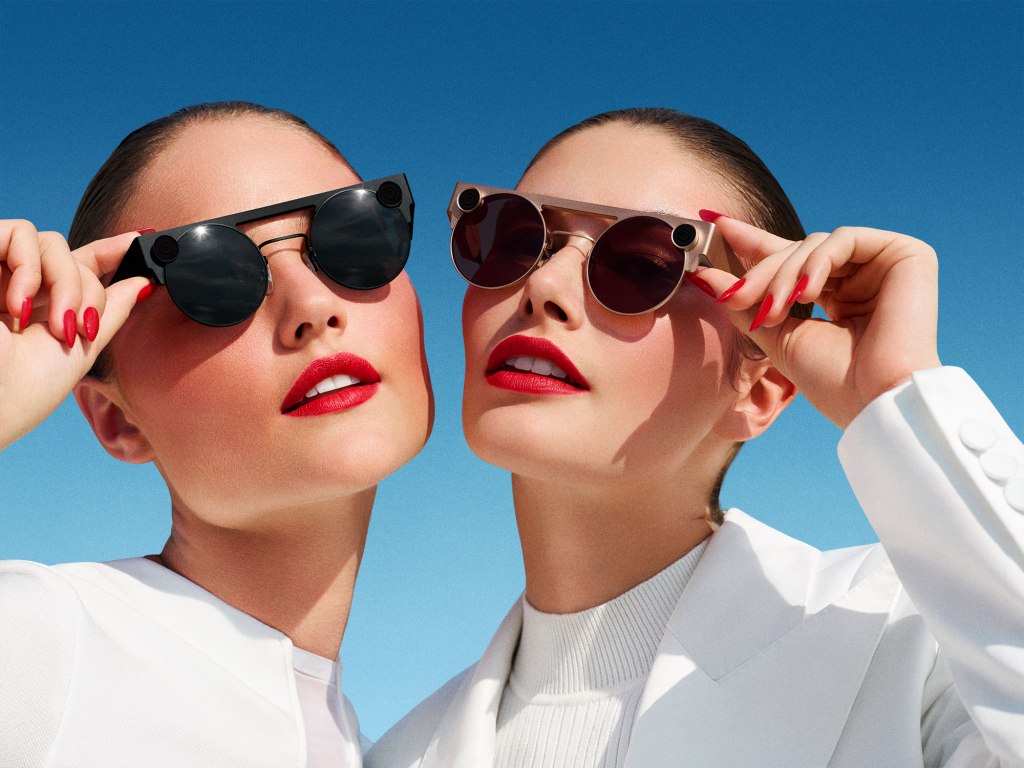 As for whether Spectacles 3 is worth the high price — it depends. Again, it’s not intended for mass consumer audiences. (Hence the decidedly undemocratic price tag.) It’s for creative people who are excited, not just by AR, but Snap’s version of it, and the growing tools available for it.

Where it goes from here is anyone’s guess. When asked, the company didn’t dismiss the notion of face wear that can shoot and also display photos and videos one day. Today, that viewing function is served by the mobile app and a 3-D viewer, which is basically an included Google Cardboard. Popping the phone in brings the images “to life.”

What matters most about Spectacles 3 is not the design or the new features. It’s that the device is just one step in the company’s campaign to augment people’s reality.

“Spectacles is just one of a number of different investments that Snap is making in AR. We’re learning alongside people,” Morris said. “As they become more familiar with the technology, we continue to iterate on it.”

The company’s first investment was the Snap camera, the popular shooter inside the Snapchat app, she explained. The second was the company’s Lens Studio, a set of tools that allow anyone to create AR lenses. “The stat that I just heard is that the lens creator community has made over 600,000 lenses to date,” she added, “and Snapchatters have played with those lenses over 15 billion times.”

Spectacles is the third investment, and perhaps the Labs team’s most critical to date. Because the group sees it as part of a larger and loftier plan.

“That’s thinking beyond the smartphone, so that we don’t have to live life confined to a small screen in the future,” she said. “That’s the long-term R&D work of Snap Labs.”

Now that Spectacles is coming out of the lab, it’s already finding its home in retail. Ron Robinson’s Melrose location in Los Angeles is the first — and apparently the only U.S. retailer — to host Spectacles 3 “Launch + Learn” experience, coming Nov. 16.