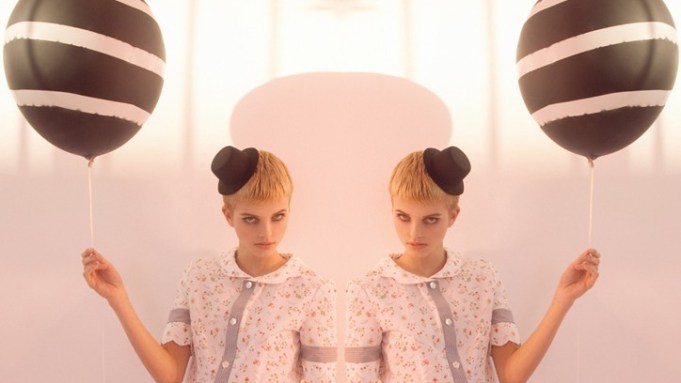 Two just-launched start-ups are trying their hand at opening up clothing design to the masses, even those who’ve never been to design school or worked in the industry.

One, Garmz, is crowdsourcing clothing design, which might sound easy but is not. Only one company, Jeffsilverman.com, has tried something similarly ambitious, and that is for shoes.

The other, Fabricly, is creating a sort of fast-fashion incubator or collaboration company, but is not crowdsourcing, except for the occasional contest. Anyone can submit a design; the company chooses which to produce and sell, at its expense. Designers are paid 5 to 15 percent on every piece sold.

Fabricly is going after the kind of high-fashion look at a low price that will appeal to readers of fashion blogs. Garmz is throwing open the gates to whatever gets the most votes; so far, many of the styles have a streetwear or clubwear look.

Both companies have received funding from angel investors in the low six figures.

“We have seen the Internet disruptively changing music and media, and we think there is huge potential in how the Internet can change how we distribute, create and think about fashion,” said Garmz co-founder Andreas Klinger.

Fabricly, for its part, offers emerging designers and nondesigners the opportunity to create edgy collections more easily and at a lower cost than they might be able to pull off on their own, much as the Target collaborations work for young yet established designers.

Other companies are successfully crowdsourcing graphic design, fabric prints, funding and retail buying. Derek Lam is the first designer who has revealed plans to crowdsource; viewers will vote on which designs of Lam’s exclusive spring/summer 2011 collection for eBay will be produced.

The way Garmz works is samples must receive about 70 preorders out of a planned run of 200 to be produced. Anyone can submit or vote on a design. Designs with the most votes are made into samples.

So far, Garmz has received about 1,000 sketches. Next year, it plans to do full collections.

The company tested the concept with a pair of draped viscose chiffon shorts in October, and last week put up its first group of four samples (three coats and a dress) for preordering. Prices range from 80 to 280 euros, or $106.64 to $373.24 at current exchange.

The company started in Vienna but will move to London by the new year. The sample room is located in Bulgaria, and fabrics come from Turkey and Italy.

Some of the many challenges of crowdsourcing clothing design include finding appropriate fabrics in small quantities, designs that can’t be produced at the quality or price intended, wide variances between sketches and samples, and the potential disconnect between those who vote for a design and those who order it — not to mention the usual challenges of fit and returns faced by any online store.

Jeffsilverman.com will also make up virtually any design using components readily available in China, but only if the designer orders it for herself. The thought is that if one person wants it, others will too, and production will be cheaper. The company has crafted its marketing around fashion bloggers, on the theory that they are a natural market for original, custom designs.

“What we are doing next year is being more transparent to designers about what our capabilities actually are so we can have more satisfied designers and people who can better leverage our support,” said Klinger. “What we are currently doing is a big experiment. We cannot perform magic but we are trying a lot. Hopefully we can keep our really ambitious plan to have a completely open crowdsourcing model but still provide lots of possibilities to designers.”

Last month, Fabricly put up its first collection, nine exclusive pieces from London label Ostwald Helgason, whose more expensive main line is currently for sale at Opening Ceremony. One of the designers is the brother of 24-year-old Fabricly co-founder Ari Helgason.

The company has received sketches from about 40 people, and plans to use designs from at least one, Helgason said. The next collection, eight styles from designer Molly Girard Coonan, the Los Angeles-based designer of Barlow, will make its debut in January. Fabricly also plans to hold a contest the same month in which anyone can submit or vote on a print pattern to be used on two T-shirts and two dresses designed by Fabricly.

The three-person company is based in New York and the clothes are made in Los Angeles. It has $400,000 to date in funding. Previously Helgason and co-founder Tom Riley created World on a Hanger, a low-cost Web-based application for invoicing and inventory for small and medium-sized apparel companies.

Fabricly is looking for an aesthetic and stories that will appeal to women in their 20s and 30s who read fashion blogs and “are quite fashion forward but don’t necessarily want to pay high-fashion prices,” said Helgason. “I’m excited about lowering the barriers to people, so they literally send us the sketches and we go through the technical process of sampling and producing it.”