Finery notified users via e-mail on Friday that Stitch Fix has bought the wardrobe platform.

Looks like Stitch Fix has been looking to expand its tech chops, and the shopping trip led it right to Finery’s closet.

According to an e-mail distributed to Finery users on Friday, the two-year-old digital wardrobe start-up founded by actress and model Brooklyn Decker and former journalist Whitney Casey just sold its platform to the San Francisco-based online styling service.

“While we stand behind the motivation for the platform and innovation in the patented technology we developed, we’ve decided it is time to close Finery’s wardrobe doors,” read the e-mail, which was signed by Decker and Casey. “Today, we’re happy to share that Stitch Fix is acquiring Finery’s technology and IP.”

The terms of the acquisition weren’t disclosed, only that Finery users have until Sept. 6, or one week, to download their saved wardrobes before the operation sunsets. What happens next isn’t clear; Stitch Fix has yet to reveal what it plans to do with its new tech purchase.

Neither Stitch Fix nor Finery immediately responded to requests for comment. 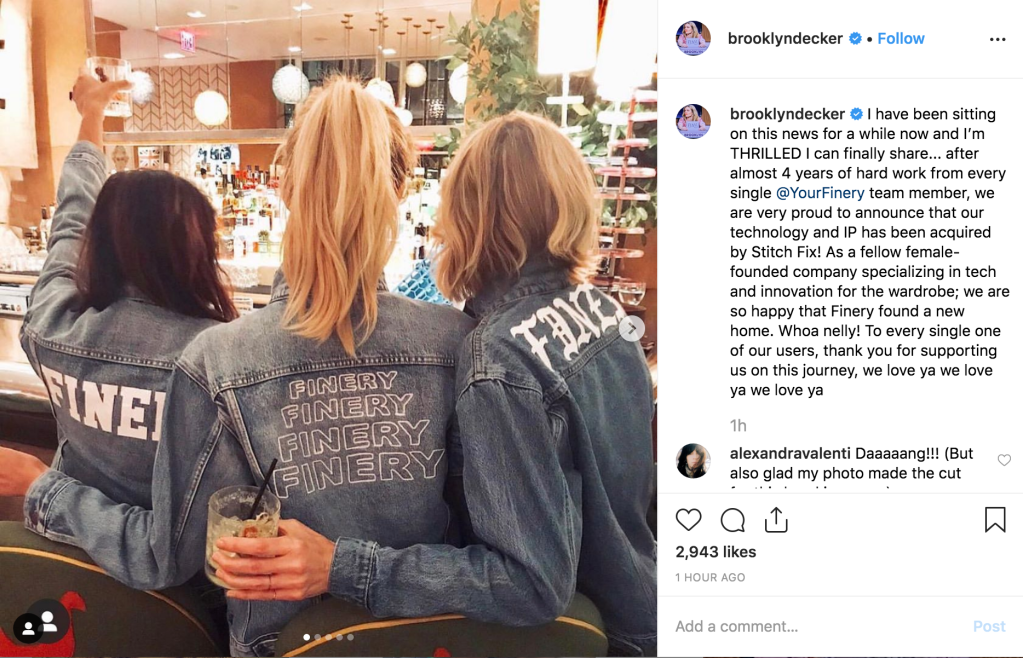 Finery’s tech let consumers create and populate their own digital wardrobes by scanning e-mailed receipts. The novel approach had a few things going for it, primarily convenience. Finery users could skip the chore of photographing every individual garment, just to get a handle on what they own. The collections amounted to a personal inventory of style, allowing people to put together outfits or even identify holes in their wardrobes.

The platform could continue under the branding of Stitch Fix and its styling service, or morph into a similar add-on feature for its existing users. It’s also easy to see how Finery’s data — as well as any analytics on what fashion consumers own, how they create outfits or other nuances — could benefit Stitch Fix. As a data-driven company, it would be able to strengthen its personalization engine and algorithms with an influx of the right kind of data.

What the deal does not include, however, is private contact info. The cofounders wrote that specific e-mail addresses or other personally identifiable information won’t be given to the new owner — a proactive move perhaps to curtail any potential privacy concerns.

Still, if any Finery fans are sad or disappointed, there’s a little perk to soften the blow: Stitch Fix will be waiving its $20 styling fee for Finery users who’d like to try the service, at least until the end of September.

A Stitch Fix spokeswoman responded to WWD’s request, stating, “We help millions of people solve the challenge of finding clothes they love, that fit and inspire them to feel like their best selves. This approach closely aligns with the mission of Finery’s digital wardrobe platform, which saved users time getting dressed and was a source of style inspiration.”

The representative noted that the company constantly seeks to learn more about customers’ “style needs,” and pointed out that some of its most successful product initiatives came from experiments with data science. And to be clear, she said, the deal covers Finery’s tech and intellectual property — not the startup itself.

“We’re excited about the potential of what we can learn through the technology that Brooklyn, Whitney and the Finery team have built,” she said.