While 2020 has lit a fire under some retailers to set up basics like online storefronts, others already invested in innovation see a widening spate of emerging technologies. Some of the latest take aim at an area of deep interest, particularly now.

Even before the pandemic kept shoppers away from physical stores and fitting rooms, the e-commerce business demanded technologies that shed better light on things like size and fit. Now, as the coronavirus rages, the need is reaching a fever pitch — and tech developers are responding.

3DLook, a company that uses computer vision to capture body measurements from selfies, is rolling out a new feature that delivers body-shape analytics. The tool aims to go beyond mere sizes or overly generalized insights, focusing instead on the proportions and figures of a brand’s real-world customers.

“The core vision of what we do is understanding what the actual customers of a brand look like, so you can help them better distribute, when they’re building pattern blocks. And this goes down to design levels,” Whitney Cathcart, 3DLook cofounder and chief strategy officer, told WWD.

“There may be certain designs that set a specific body shape better than others. But if you don’t understand what your shape distribution looks like within your own customer base, you’re never going to truly align the fit of your brand with a wider variety of customers,” she said.

The company sees body-shape analytics as a game-changer that can help apparel companies serve a more diverse customer base. It’s another take on democratizing fashion, but set in technical terms and swathed in plenty of data intelligence.

“Internally, we’ve been building out an analytics platform that looks at body shape distribution, across geography, across gender, and so on,” she continued. Now it’s ready to roll out for enterprise clients for the first time. “It’s really getting in and looking at body-shape distribution among their own customers that can then be segmented.” 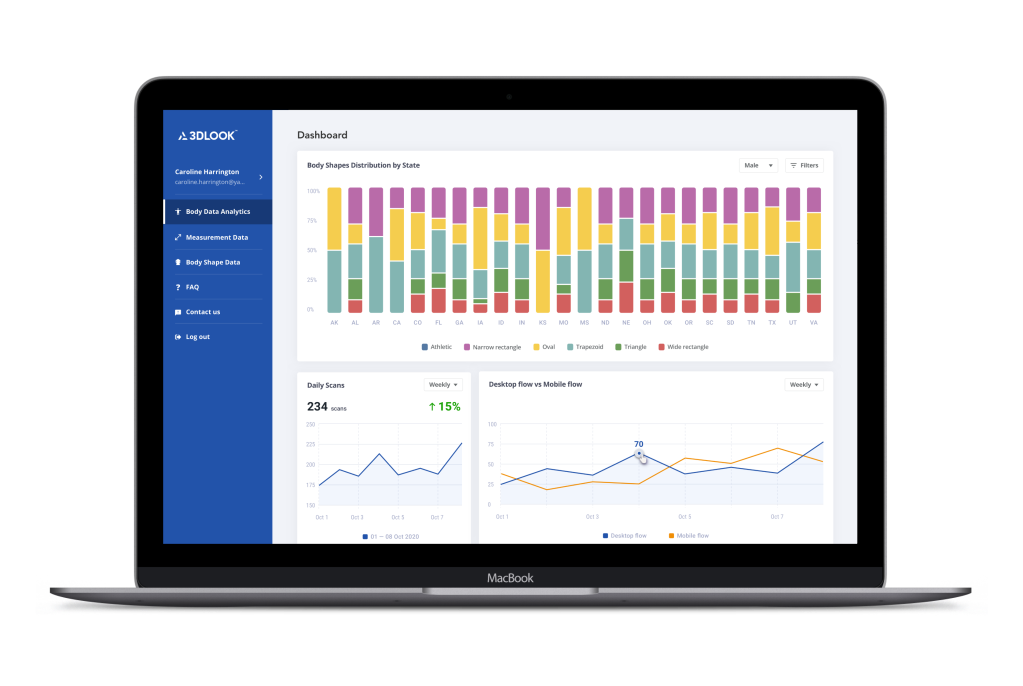 3DLook is rolling out a new analytics feature that goes beyond flat sizes to body shapes.  Courtesy image

Cathcart offered an example of how the analytics tool can drill into key details: “Let’s say you’re looking at women in New York, who range in height from 5 feet, 5 inches tall to 6 feet, and then segment further by weight distribution,” she said. “We’re now able to then go in and really analyze what body shape distribution looks like within a certain segment.“

Because no two size sixs are the same, it’s crucial to understand if pear-shaped figures dominate in one area of the country, while another city is better represented by, say, an hourglass body type among younger or older consumers.

Those sorts of nuances can completely change what and how fashion businesses design and market themselves, Cathcart said. They can create better-fitting products, target designs, shift distribution strategies based on groups or regions and optimize inventory.

As new techs better inform retailers behind the scenes, others look to boost virtual capabilities in more directly visual ways.

For its VStitcher 3-D design software, Browzwear is offering a new, customizable avatar called “Olivia.” The company describes the virtual model as “hyper-realistic” and ”parametric,” which means measurement adjustments work proportionally. So no 7-foot-tall models with 14-inch waists here.

With Olivia, realism is the whole point. When it comes to showcasing product, realistic imagery is more compelling than cartoonish representations. And although plenty of retailers deploy avatars these days, the range in quality yields mixed results that can leave the viewer wondering if they can trust what they’re seeing.

But when the visuals are believable, they can be useful across the operation — for everything from prototyping, internal review and approvals to production and merchandising.

“When I started in the industry, it wasn’t uncommon for it to take 50 weeks for a garment to go from idea to store floor,” Avihay Feld, Browzwear cofounder and chief executive officer, said. “The world is going through major changes, and technology companies now know more about shoppers and their buying habits. In order to sell more efficiently, a 50-week cycle will not do.”

With a decent avatar wearing a digital prototype, iterative physical samples are no longer needed, and that can shorten development and production. It also offers a new way for retail buyers and consumers to experience the product and get a better sense of fit.

Consider one recent retail trend, in which customers choose to see garments on one of a range of avatars. It’s another approach to virtual fit, in that shoppers can see how a jacket or dress would look on body types similar to their own.

Fashion’s interest in such tools has grown, particularly since the onset of the coronavirus pandemic.

“[With the challenges of] the lockdown and the lack of available physical samples, the only way to make decisions and complete workflow is by using 3-D digital alternatives,” Feld said. Companies not only see the tech as a valid alternative, more look at it as a business advantage that can create efficiencies and help sell more of what they make, he added.

Think of it as part of retail’s broader technology push, at least in some corners of the industry. Where the innovation game is strong, results follow. In fact, according to data insights firm Incisiv and its 2020 Apparel Digital Maturity Benchmark report, retail’s digital leaders are blowing away less tech-savvy companies in financial performance.

Last year, the top 25 percent of digitally mature retailers saw 22 percent growth in digital sales, the firm said. This year, it projects growth of at least 10 times or more.

“The apparel segment was one of the early adopters of digital technologies and has continued to be a leader in setting expectations for what digital experience should be for customers,” said Amar Mokha, chief operating officer at Incisiv.

Its report revealed that the top 25 percent of these retailers were more responsive to pandemic-fueled challenges, mitigating at least some of the potential harm to their businesses. Macy’s led the top 10 of the most digitally mature retailers, followed by Kohl’s, Neiman Marcus, Target and Nordstrom. Walmart was ninth on the list.

Clearly a few of those retailers have struggled, and rather publicly. But the damage could have been worse had they not adequately invested in online services, app development or data intelligence efforts.

And in a year that has shuttered doors, turned malls into ghost towns and slashed revenues, it’s notable that they still consider the investment a priority.

Nordstrom, for instance, loaded its anniversary sale in August with digital features, and the learnings from it will inform how the department store approaches the holidays and beyond.

The event rolled out the sale in stages, giving loyalty members early access with a more curated experience and brand new inventory. The goal, as always, is to please loyal patrons. But it also allows the company to more closely see activity and monitor trends that will shape its 2021 buying.

The store turned its sales preview — which was typically done in catalogue form — into a digital experience, complete with wish list capabilities and recommendations. Customers created as many as 20 million wish lists, qualifying it as a hit that also shed early light on demand. A new feature that suggested substitutions for items that sold out and alerts when products became available again were also valuable, given Nordstrom’s shallow fashion inventory and limited exclusives.

A Nordstrom-style board, as created by its virtual stylist.  Courtesy image

“We’ve had really outstanding customer satisfaction scores,” Brian Gill, Nordstrom’s chief product officer, told WWD. And this was despite hiccups, like issues with supply chain and inventory — the same sort of challenges that have disrupted the fashion and consumer technology sectors as a whole this year. But the company was pleased with the results.

“It wasn’t flawless,” Gill noted, “but a lot of the qualitative feedback has been really good.”

The department store wouldn’t share hard numbers from the anniversary sale, but chief financial officer Anne Bramman told the Goldman Sachs Annual Global Retailing Conference in September that the business “had the highest sell-through of anniversary merchandise ever.”

It’s a bright spot for the company after a troubling year, marked by a severe downturn in business and store closures. Now it’s looking to build on its services ahead of the holiday period, expanding pick-up options for stores and online ordering for Nordstrom Rack.

“Connection is clearly what we think service needs for the customer today. Connection, historically, especially in our stores, has meant a one-on-one personal connection with customers,” he said. “That’s still important, but increasingly, it also means knowing the customer, being relevant and being able to personalize the experiences through digital means.”