People often ask Meghan Trainor if she triggers the alarm system whenever she goes into Barnes & Noble. That's because she has a radio frequency identification tag embedded in her arm. It's part of an interactive sculpture series she created out... 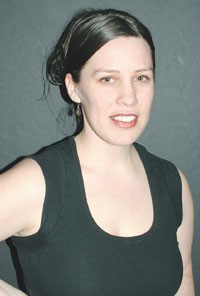 People often ask Meghan Trainor if she triggers the alarm system whenever she goes into Barnes & Noble. That’s because she has a radio frequency identification tag embedded in her arm. It’s part of an interactive sculpture series she created out of rubber, plaster and wireless tags. The piece, called “With Hidden Numbers,” consists of a dozen or so small objects in a box that are meant to be picked up and played with. The objects have a ghostly, familiar, time-worn quality, like something dug up from the recent past that you recognize but can’t quite place. There is a transparent, amber-colored rubber bar that looks like Neutrogena soap. And some dagger-shape and rounded objects that turn out to be modeled on plumb bobs and porcelain elevator insulators. There are also squares with markings that resemble mah-jongg tiles. All have embedded RFID tags.

When Trainor holds one of the objects near a scanner, it triggers a recording of an authoritative male voice reading numbers. When she waves the scanner over her arm, it plays “Hey Mami, you sexy, you beautiful,” a sample from the rap song “Hey Mami” by Fannypack. Soon she’s holding two objects at once and waving them back and forth, dancing and interweaving samples of sound like a DJ scratching on vinyl.

“I’m interested in the way we think about technology and our emotional response to it,” said Trainor. The public hysteria over RFID tags in clothing, and the mistaken notion that they would allow the government to spy on citizens and track their movements, grabbed her attention.

“If something has been around for a long time, we have a different response to it,” she said. “I found that to take new technology and juxtapose it with folk-style objects is a way to get around people’s initial response to it. It was an idea about old and new technologies and how we feel about them.”

The RFID tags embedded in the objects contain numbers that can be read by a scanner via radio signal. Trainor’s laptop plays any sound she has associated with one of the numbers in a database. Trainor used to be a database administrator and created a faux data syntax for her project. An example: Tile = value of RFID tag.

Before becoming a student at New York University’s Interactive Telecommunications Program, where she worked on “With Hidden Numbers” for her thesis, Trainor made paintings that depicted robots and other technology. This spring, she was part a group that created and exhibited a massive sculpture called “Wave Machine” at the Chelsea Art Museum. Its grid of lights mimicked an executive toy with blue waves inside a cube that was popular in the dot-com era. The unusual fabrication of the sculpture combined the artistic and the technical: The group silk-screened computer instructions onto copper on the system’s motherboard. Trainor was graduated from ITP in May and plans to continue exhibiting her work while she works at an interactive media company as a content manager.

And, no, the RFID chip in her arm doesn’t set off the alarm at Barnes & Noble. That’s because it uses a different frequency. Trainor injected herself with one of the RFID capsules that are used to track lost pets because she was smitten with the idea of becoming a cyborg, she said.