A report finds the gap between the top two brands, Gucci and Louis Vuitton, and number three, Chanel, widening.

There's a polarization of fashion, according to The RealReal's luxury resale report.

The luxury resale e-commerce site The RealReal today published a report that provides a window into the consumer’s tastes and mind-set. Based on sales and demand data from millions of shoppers and millions of items sold in the past year, the company believes the report provides a definitive look at the shopping shifts and rising trends in luxury resale.

Besides e-commerce, The RealReal operates physical stores and authentication and valuation centers for high-end brands. Having sold 9.4 million items since its launch qualifies The RealReal as something of a proxy for the secondhand luxury market. Its June initial public offering saw shares jump nearly 50 percent to $29.90 in the first minutes of trading, giving The RealReal a $2.5 billion market capitalization.

“Gucci and Louis Vuitton are pulling away from Chanel,” said Sasha Skoda, The RealReal’s women’s merchandise director, adding that the reason for Louis Vuitton’s ascendance is because “it’s having a lot more fun and reimagining its prints.”

While Gucci occupies the top slot in nearly every category and has strengthened its lead over all other brands, there may be chinks in its double-G brass armor. “There’s news of Gucci’s growth slowing down in the primary market,”  said Skoda, adding that this hasn’t been seen in the secondary market yet.

“Gucci and Louis Vuitton have successfully adapted to the shifting demographics of luxury shoppers with relevant collections with fresh points of view,” said Rati Levesque, chief operating officer of The RealReal. “From Gucci’s bold maximalism to Louis Vuitton’s streetwear-influenced designs, both brands feel unique in a crowded field of luxury labels vying to win with Millennials.”

The polarization of fashion isn’t only evident in ready-to-wear. “Mini handbags are a big trend now, but big tote bags are also popular,” said Skoda. “With resale, consumers can shop many trends from different decades. Because we don’t purchase any products [The RealReal operates on a consignment model,] we don’t need to push certain trends forward. We try to curate high and low, which gives a sense of discovery. People don’t dress head-to-toe in one designer, anyway.”

According to the report, style’s new rule – that anything goes – is apparent in macro trends uncovered by the site. For example, year-over-year searches for hair clips such as those with rhinestones from Gucci, are up 378 percent; tie-dye apparel, 364 percent; neon, 358 percent; blazers, 161 percent; cardigans, 112 percent; sheer items, 111 percent, and PVC, 107 percent.

The importance of sneakers can’t be overstated. “Balenciaga broke into the top 10 list due to its Triple S sneaker,” said Skoda. According to the report, the brand was up by 102 percent, one of a troika of labels with the highest growth rates among the top 10. Dior saw a 99 percent increase, and Fendi, 89 percent, with the three brands’ greatest demand coming from Millennials.

Celine, a notable omission from the top 10, dropped off the list this year. “After the Phoebe Philo fallout, and Hedi Slimane, people are waiting to see what happens to the new Celine,” Skoda said, referring to the British designer, who left the house in 2018, and initial scathing reactions to her successor’s first collection.

“Consumers are looking for the next big brand. It could be Bottega Veneta or one of the most-searched emerging brands.” They include Staud, up 850 percent; Khaite, 717 percent; Totme, 509 percent; Rejina Pyi, 465 percent, and Sandy Liang, 355 percent. 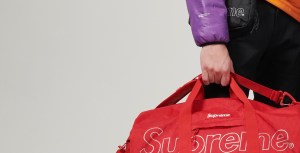 Streetwear still reigns supreme, according to The RealReal.

As a category, investment handbags with the highest average resale value over time is led by classics such as the Hermes Kelly, which has a steady resale average value of 93 percent. “It” bags, on the other hand, start at 80 percent and plummet below 60 percent in the fifth year, so buyers need to act quickly to maximize their return on investment.

“The price of a luxury handbag makes it a true investment, but whether a style has staying power or fizzles out can dramatically impact its worth on the resale market,” Skoda said, adding that shoppers are becoming more savvy in choosing handbags with an eye toward eventual resale.

Streetwear is unstoppable, to hear The RealReal tell it. The category saw year-over-year search demand growth of 281 percent, with the sector’s approach of limiting supply in the primary market, creating surges at resale. “We’ve seen a big uptick over the past year,” said Sean Conway, sneaker and streetwear expert, attributing the growth to gender-neutrality and statement pieces. Millennials are responding, and there’s demand growth from Gen X and women. In fact, women buying men’s streetwear is up 95 percent year-over-year,

When streetwear buyers make the leap to luxury brands, they’re most likely to buy Gucci, followed by Prada and Louis Vuitton.

“Louis Vuitton is going to become a close second because of Virgil Abloh, artistic director of men’s wear, and the quick drops,” said Dominik Halas, men’s wear and archival expert at The RealReal. “Yeezy still reigns supreme. It’s a very entry-level gateway sneaker for people who’re buying them to wear because it’s a very recognizable shoe.”

The RealReal said fashion’s impact on the environment and sustainability are strong considerations for its customers, with 82 percent citing the latter as an important reason for shopping The RealReal. While 93 percent of consumers reported shopping at department stores such as Saks Fifth Avenue, Nordstrom, Neiman Marcus and Bloomingdale’s, 32 percent said they’ve replaced fast-fashion retailers with The RealReal.

Luxury Brands are Running Fast With the Sneaker Trend

Is Africa the Luxury Industry’s Next Golden Continent?