Entrepreneurs tend to describe their visions of designing and making products in clear-cut terms — as though there’s a simple, natural path from concept to manufacturing. But nothing could be further from the truth. Production pipelines are a complex matrix that can go horribly awry, especially across borders.

Enter The/Studio, a five-year-old company on a mission to ease the manufacturing challenge — particularly for small-batch projects — with a platform that includes factories in China, Pakistan and India, as well as some in domestic areas such as Los Angeles. The company just scored $11 million in Series A funding, led by Ignition Partners.

According to Joseph Heller, chief executive officer and founder, the business serves as more than just a classifieds section for manufacturers and clients. That already exists, he said.

Sensing a gap in the market, The/Studio focuses on smaller quantities than the typical high-volume minimums that factories often charge. The scenario makes it attractive, not just to budding mom-and-pop operations, but also for larger brands with special projects.

“You can think about The/Studio for the quick-turn scenario, where people need merchandise that’s relevant to what’s happening in the world today,” said Heller, a veteran in the manufacturing business with expertise dealing with the Chinese industry. “There really is no platform to support that.…One of the big reasons that no one’s tried to do this is that it’s really hard to do a 500-piece order at scale and still make money. It’s a lot easier to do that with a 100,000-piece order. So we had to build our own technology to enable that communication between the customer and the factory, and our software helps them manage that.”

In essence, the company wants to take away the headaches in the client/vendor relationship, especially when it comes to smaller orders. The/Studio vets its vendors — numbering more than 400 factories to date — and offers its own custom communication tools and client dashboard. And it can intervene when issues crop up, advocating for resolution on behalf of its partners. 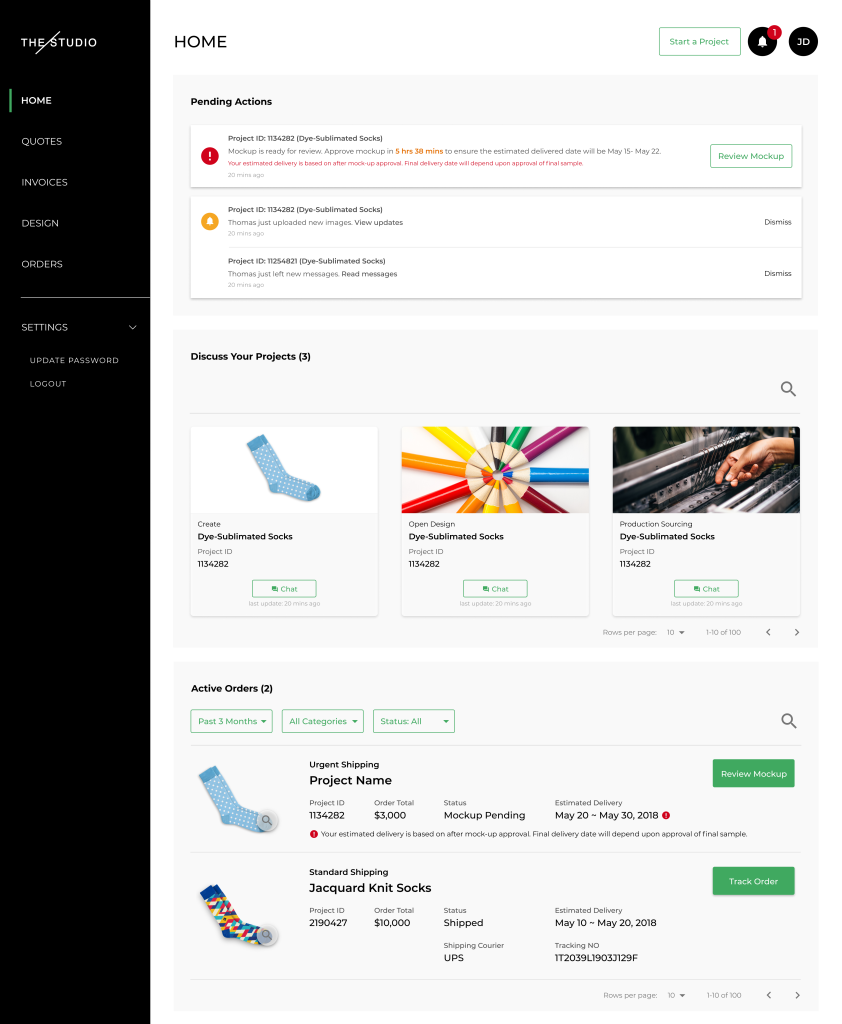 The/Studio counts 100,000-plus customers and more than 32 million products since its inception — including well-known brands such as Nike, Tommy Hilfiger, Urban Outfitters and more. Indeed, the company has catered to larger operators for finite quantities of special-edition goods for pop-ups and other events.

The fate of manufacturing seems to hang in the balance right now, as the Trump administration’s sorts out its policy on China. Apart from trade war concerns, especially in light of tariff pressure, the White House is focused on keeping jobs in the U.S.

But Heller’s not concerned about that. After five years running the operation, he said he has built out the foundation for his platform and is more focused on the future.

The company just scooped up Michael Lee, head of marketing for Alibaba.com for North America, to help spread the word about the business. And it will soon launch tests for design services. A prime example would be an apparel company looking to develop a line of accessories.

The/Studio works with a variety of vertical markets, but its primary focus is on apparel and accessories. “Fashion manufacturing is like a trillion-dollar global industry,” the ceo said. “It’s a massive space.”