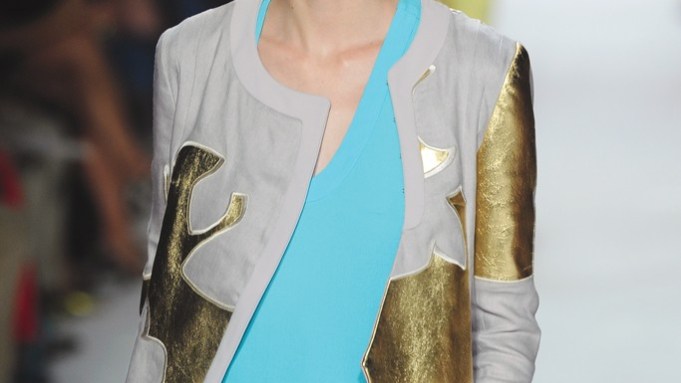 Since the inception of her company, Diane von Furstenberg has been an expert on communicating the message of her brand. And with the advent of social media and exponential growth of digital technology, the company has maintained its position as one of the more tech-savvy brands in the fashion space.

Most notably, the designer’s spring 2013 runway was the launching pad for Google Glass, in September 2012. Last June, the brand partnered with Net-a-porter on a collection of optical and sunglass frames, DVF Made for Glass. The e-tailer was the first Web site (besides Google) to sell Glass, in the form of a $1,700 prepackaged bundle — comprising Glass, a DVF optical frame and a sunglass style in varying colorways.
Last year, DVF became the first in a series of designers to work with the Council of Fashion Designers of America and Google on a shoppable experience that allowed users to purchase from a Google+ Hangouts on Air app.

“Everything in the company has her [Diane’s] involvement, and she’s no less engaged in social [media],” Eran Cohen, DVF chief marketing and direct-to-consumer officer, said. “You see her posting  selfies before she’s going to the Met Ball or getting her nails done. They are real photos. They aren’t retouched and developed — these are genuine.”

It’s even taken a localized approach on Twitter — at the store and market level (handles exist such as DVFNewYork, DVFSouthCoast and DVFIndonesia) — and posts on Facebook are geo-targeted in countries including Belgium, Indonesia, Korea and Thailand.

According to Cohen, two social media teams — one that works on execution and one that concentrates more on strategy — manage the brand’s digital presence. There is also a dedicated team for World of DVF, a blog that von Furstenberg will again begin to contribute to biweekly (she has penned content for the blog in the past).

The brand started rolling out its digital-centric 40th anniversary in February with “Journey of a Dress,” a series documented via social media of different influencers around the world wearing von Furstenberg’s New Jeanne Two wrap dress in a black-and-white chain-link print. Coco Rocha kicked off the program, and Emma Roberts, Jourdan Dunn and 10 bloggers worldwide — from Chiara Ferragni of The Blonde Salad to Jessica Stein of Tuula Vintage — also documented their “wrap story” on their social media channels, dvf.com and YouTube. “Journey of a Dress” will run through November, and to date, the associated hashtag has seen more than 25,000 shares.

Von Furstenberg wanted fans to get involved, too. Hundreds of customers worldwide submitted personal wrap dress stories via “Tell Us Your Wrap Story” at dvfwrapstory.com.

“Like everybody, we have core platforms and then ones that we are present on but are not as prolific as others,” Cohen said, noting that overall, Instagram probably sees the most engagement. “The world is enamored with Instagram, people engage visually.”

In an interview with WWD last spring, von Furstenberg said, “It has to be organic; you can’t strategize Instagram months in advance. It’s called Instagram — it has the word ‘insta’ in it.”

But social media is more than just a brand awareness tool, Cohen explained, emphasizing the “extra impact” an image can have if it goes viral in the social space. For example, when Kate Middleton was shot wearing an ikat print dress while in Australia in April, in the course of hours, it became one of the most searched items on dvf.com as well as on partner sites.

“It sold out in an instant,” Cohen said of the dress, adding that the brand itself didn’t post the image on social media. “It had an enormous impact on sales of that dress, as well as other items in that same print.”