The American fashion designer brings his signature flair to some of Samsung's newest gadgets.

Thom Browne’s latest just popped up, and it’s not a suit or a preppy dress. The American fashion designer partnered with Samsung once again on a special edition Galaxy Z Fold2 folding phone, along with the new Galaxy Buds Live and Galaxy Watch 3, making for a themed fashion bundle.

Unveiled Wednesday at the South Korean tech giant’s first virtual press conference, the limited-edition devices are twists on some of the company’s new lineup, which also includes the Galaxy Note20 Ultra and Galaxy Tab S7.

Earlier this year, Browne designed the previous models of these devices in similar fashion, drawing on his signature Americana striping against a gray background. The main difference is that Samsung updated the form factors of its devices.

“Partnering with Samsung to create Galaxy Z Flip Thom Browne Edition was an incredible opportunity to reimagine how consumers express themselves through their smartphone,” Browne said during his first collaboration. “We designed Galaxy Z Flip Thom Browne Edition just like I do my collections — with proportion, individuality and aesthetic in mind — to create the perfect blend of art and technology.”

It makes sense to give Browne the set of wearables, as devices that are body-worn need to factor in style just as much features. The watch and smart earbuds carry the same aesthetic as the phone. 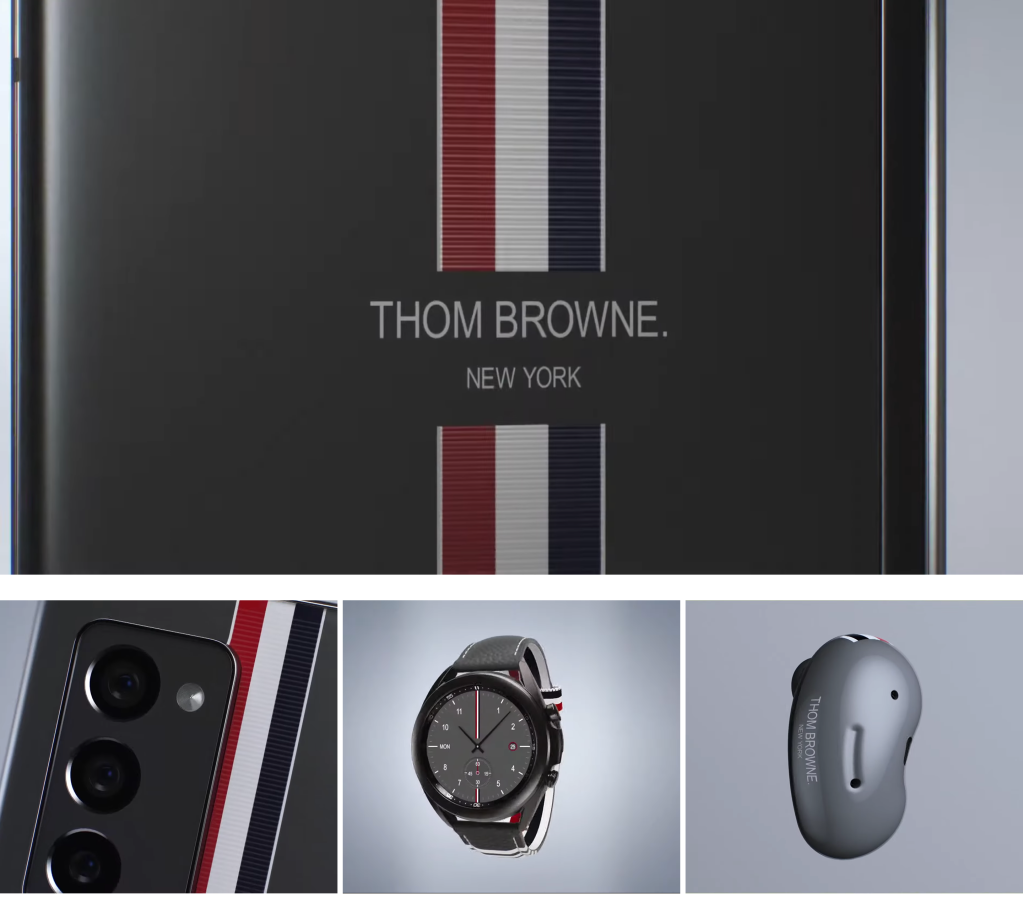 The trio of gadgets are expected to cost a bit more than the standard versions, though Samsung hasn’t revealed pricing yet for the phone or the bundle.

The standard and limited-edition Galaxy Watch 3 smartwatch focuses more on health features this time, with upgrades to fitness tracking and a fall detector that automatically notifies emergency contacts. The version coming to South Korea offers more advanced features, including echocardiogram and blood pressure monitoring. Availability begins Thursday with four versions, and prices start at $399.99 for the base model.

Samsung’s Galaxy Z Fold2 proves that its attention to folding smartphones is no flash in the pan. The company is one of just a few companies that makes foldables — just as it was one of the first to popularize the “phablet” trend years ago, which can be blamed for blowing up smartphone screen sizes into tablet-like proportions.

The Z Fold2 is similar, in that its folded phone opens into a tablet-size screen. The latest version enlarged the display real estate a bit, reaching 7.6 inches when opened and 6.2 inches when closed.  Samsung will said it will come later this year, which is a bit vague. But it plans to reveal more launch details in September. 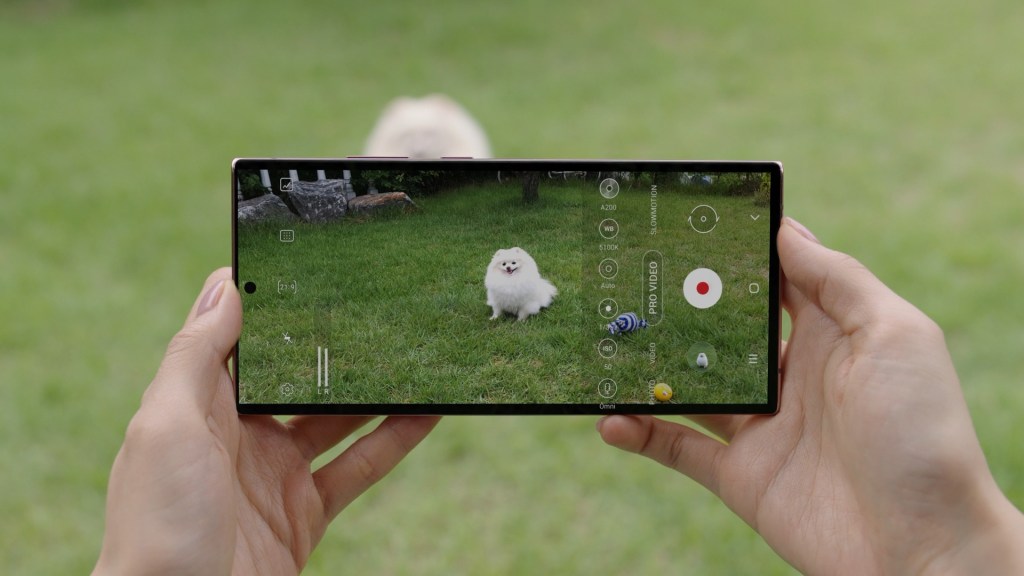 The Note 20 features a 6.7-inch screen, powered by the company’s fastest mobile processor, the company said. Samsung described the 5G phone as having its “best screen yet.”

It also added more gesture controls and note-taking accuracy to the model’s bluetooth stylus, the S-Pen, and integrated Nearby Share, so users can transmit files wirelessly by pointing their phones at one another. Of course, since Samsung is also a top TV maker, it included a feature called DeX, which lets the phone connect with smart TVs.

The device comes in two models, the standard version and the premium Note 20 Ultra, the latter of which boasts better technical specs, like a larger 6.9-inch screen with a higher refresh rate, microSD storage expansion, periscope zoom lens and larger storage option. It also comes with premium pricing: Galaxy Note 20 starts at $999.99, and the Note 20 Ultra starts at $1,299.99. 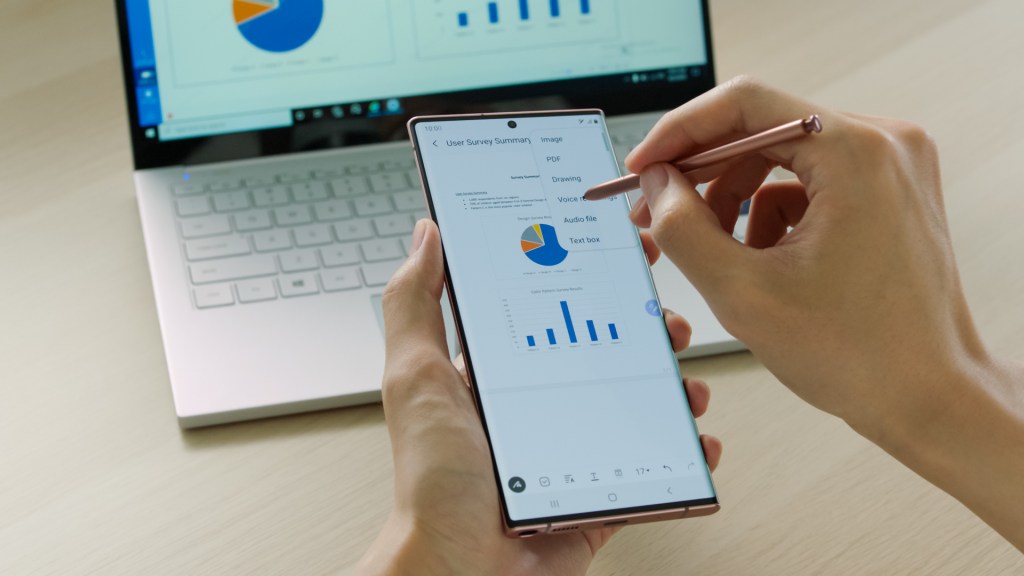 The company promoted its tablets, the 11-inch Galaxy Tab S7 and 12.4-inch S7+, as the first to support 5G available in the U.S. They cost $649.99 and $849.99, respectively, offer similar features to the Note 20, including productivity and gaming features, but on a bigger screen. Users can even use it with an S Pen, as well as a keyboard and a wireless mouse, if they’re willing to spring for the add-ons.

Samsung introduced all of these units during a virtual press event, which is becoming a hallmark of the coronavirus era for the tech sector. 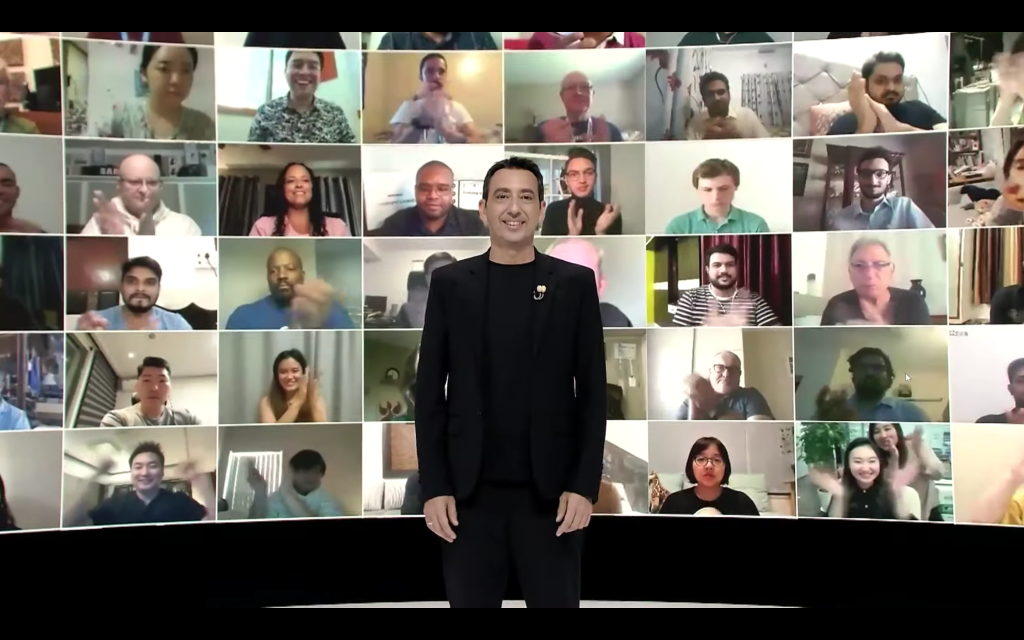 Samsung piped in fans part to create the feel of a live audience.

But the company’s take was a little different: Instead of a standard Zoom video conference call, which can feel rather lackluster for companies used to spending tens of thousands or more to hype their products, Samsung beamed in a wall of fans to create the feel of a live audience.