The New Davids are learning faster than ever — and the old crew of Goliaths is picking up a thing or two as well.

Fashion is being overrun by born-online brands that are more often than not grabbing market share by being incredibly focused and quick to pivot.

Think Warby Parker, Bonobos, Rent the Runway and their many followers. The Traub consultancy revealed its latest “New Davids” report exclusively to WWD, identifying the brands that are putting a new, younger spin on everything from activewear and eyewear to hair care and men’s grooming.

This is the third year Traub has defined the ever-expanding universe of New Davids. There are more than 350 companies featured in this year, including 150 new entrants. About a dozen companies went out of business and fell off the list from last year. (Last year’s group of 200 companies was estimated to have revenues of about $2 billion — a figure that would definitely have increased for this year’s group.) 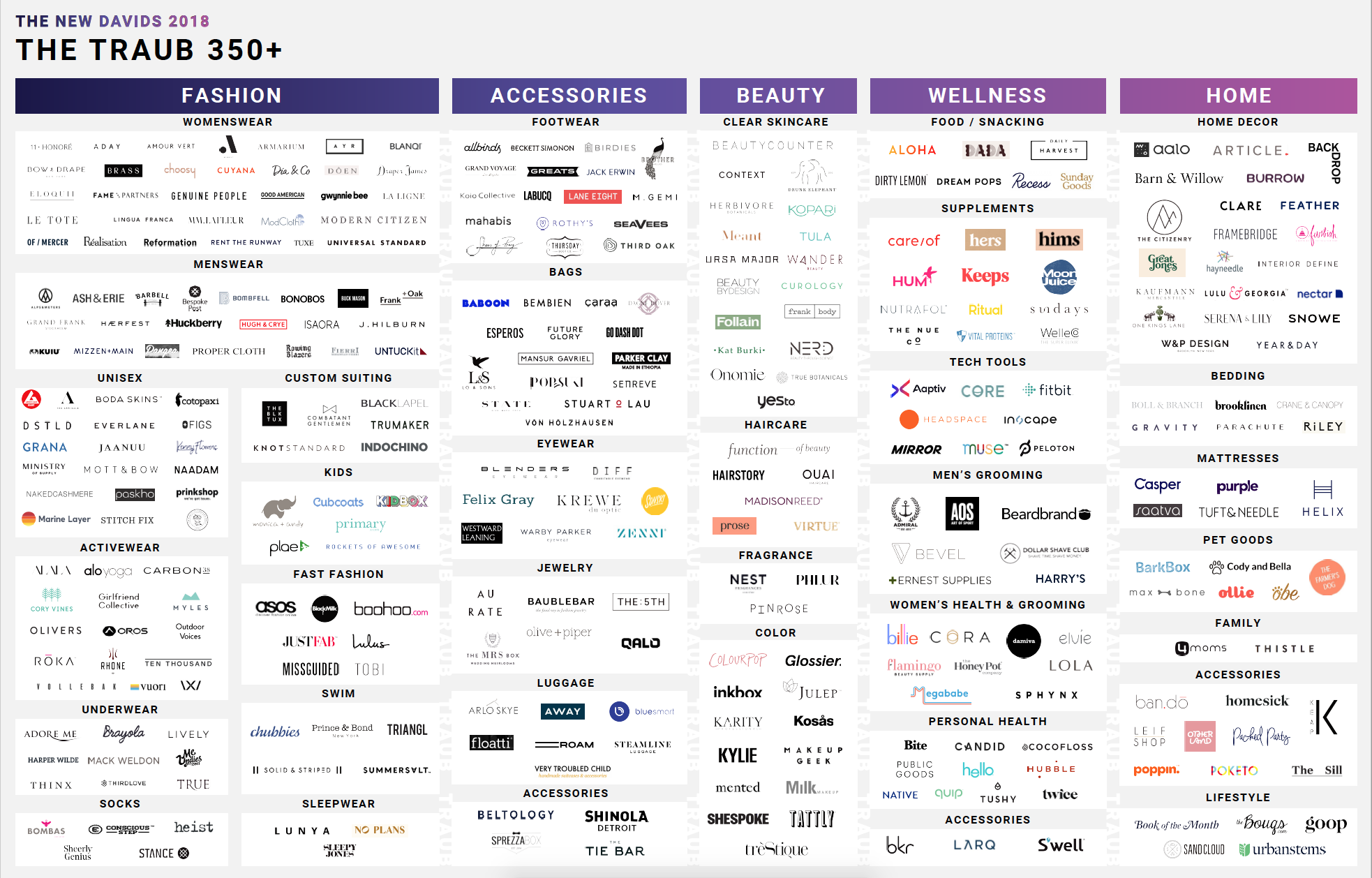 The dynamic has also changed. Instead of just upending the establishment, the younger brands looking for a foothold are adopting and adapting the methods of the old guard, for instance more of them are opening physical stores to pick up new customers.

“It is no longer about old versus young, big versus small, online versus off-line across the board; it’s the brands that are seen as authentic, as embracing and embodying a set of values and communicating directly with global consumers that are succeeding today,” the report said.

“While the David and Goliath titles imply that there can only be one winner, we believe the future will be determined by the best of both.”

And as the younger brands are following the least-expensive path and starting online before growing into bricks-and-mortar, established companies are buying into the game. Macy’s Inc., for instance invested in retail space rental concept B8ta, and Walmart Inc. most recently acquired Eloquii and Bare Necessities.

* The Stars — Pioneers like Warby Parker and Dollar Shave Club that have $100 million-plus in funding or have been sold to major players.

* The Stratosphere — Brands like Glossier or Everlane that have more than one store and have garnered attention in both urban and suburban markets.

* The Clouds — Companies such as Hims and Thinx that have moved beyond their start-up phase and have enough money to support some physical presence.

* The Launchpad — The new comers that have launched in the last year, including Lane Eight and Prose.

The competition is fierce and the customer acquisition costs are high.

Kelsey Groome, Traub managing director, said it was those costs that were driving newer brands to open stores to boost their exposure in a world away from the crowd in cyberspace.

“It’s harder to find the needle in the haystack,” said Groome, who edited the New Davids, which was written by senior associate Daniella Fischel and associate Michal Edelman Tepper.

The report pointed to a survey from the International Council of Shopping Centers that found emerging brands see an 45 percent boost in web traffic following a store opening.

That doesn’t mean the new brands — built around a business model that cuts out the middleman of the wholesale supplier — are turning into old-style retailers.

“These brands are speaking with their customers in a tone of voice that is approachable, conversational and the key thing here is that they are learning from their customers and incorporating that into their dialogue,” Groome said. “It’s this notion of pulling from the consumers versus pushing a vision onto people. ThirdLove is a very good example of one that is effectively crowdsourcing some of their product line.

“It is a new path and a new business model to really build a consumer brand,” she said. “It is really tapping into a consumer mind-set shift as you get into the Millennials and younger. The approach that all of these companies have taken is resonating. They are by their very nature very nimble and quick to change.”

And they’re changing the rest of the industry while they’re at it.