President Trump’s post-April Fool’s tweet storm Monday morning was no joke: Once again, Amazon landed in his crosshairs, as the commander-in-chief unleashed new verbal assaults about a range of issues that have been sticking in his craw.

“Only fools, or worse, are saying that our money-losing Post Office makes money with Amazon. THEY LOSE A FORTUNE, and this will be changed. Also, our fully tax paying retailers are closing stores all over the country…not a level playing field!” 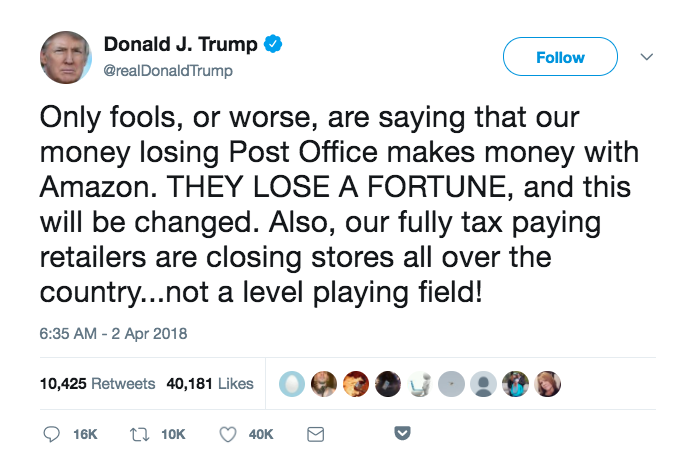 Trump’s attention has been fixed on Amazon over the past few days, heaping criticism on the e-commerce giant for its tax treatment and impact on retailers and the U.S. Postal Service. The President claimed that the USPS “will lose $1.50 on average for each package it delivers for Amazon” and called for an end to the “post office scam.” Neither he nor the White House cited the source for the number.

The Postal Service’s financial woes in the digital era are no secret. But according to the Inspector General’s blog, the Postal Service’s growth opportunity is package delivery. “For the Postal Service, growth in packages is most welcome, especially as it continues to lose letter mail volumes,” the site states. As an independent operator, it often strikes deals with large retailers, and according to the e-tailer and tech company, Amazon’s massive business and logistics approach pumps much-needed cash into the mail carrier, which acts as a critical partner for completing last-mile package deliveries.

All USPS package contracts are reviewed annually by a specialized oversight agency, the Postal Regulatory Commission, which reviews and approves USPS costs and pricing practices. By law, any agreements to deliver Postal Service packages must be profitable enough to at least cover incurred costs. Packages, competitive products, must contribute at least 5.5 percent of total USPS institutional costs. As of last year, these packages accounted for more than quadruple that level. In 2017, the Postal Service generated $20.7 billion in revenue and $7 billion in profit, with package profit growing, even as mail volume fell.

The finer points of USPS’ specific arrangement with Amazon aren’t public knowledge, but Bernstein Research analyst David Vernon estimated in 2015 that Amazon’s paid $2 per package to the Postal Service.

Although no plans have crystallized to regulate Amazon yet, there’s some suggestion that it’s only a matter of time. According to a tweet Thursday from Brad Parscale, who will lead Trump’s 2020 presidential campaign, the post office could be weaponized against Amazon. He wrote that the White House may intervene in an attempt to renegotiate Amazon’s new postal rates and drive up its cost.

“Once the market figures out that a single @usps rule change will crush @amazon’s bottom line we will see,” Parscale tweeted. “Doubt if the @washingtonpost will ever report the truth about @Amazon’s government subsidy.”

Reports last week that Trump was “obsessed” with reining in Amazon triggered a $53 billion dive in market value. Amazon’s founder and chief executive officer Jeff Bezos is also the owner of The Washington Post.

The President’s Monday outburst ran through many of his favorite hits: In addition to Amazon, he took fire at immigration, NAFTA, “fake news” and the Department of Justice. He also tweeted a full-throated defense of Sinclair Broadcast Group, the country’s largest broadcaster, which owns or operates more than 190 television stations.

Anchors at local news stations around the country gave a forced read in front of cameras last month, warning of fake news and issuing a promise for fair and accurate reporting, while urging viewers to comment on the station’s web site “if you believe our coverage is unfair.” The message, which reached an aggregate of millions of viewers, found new life online. A video featuring the clips stitched together and synced, with the recitations spoken in lockstep, has gone viral.

“So funny to watch Fake News Networks, among the most dishonest groups of people I have ever dealt with, criticize Sinclair Broadcasting for being biased,” the President tweeted. “Sinclair is far superior to CNN and even more Fake NBC, which is a total joke.”